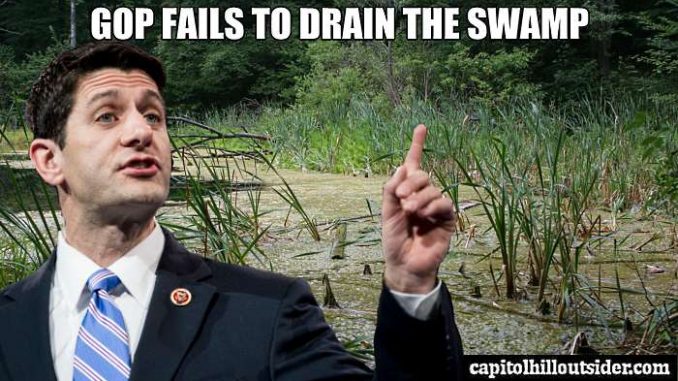 Thankfully, the 2016 presidential election “shattered” heir apparent Hillary Clinton's White House prospects - perhaps forever. Mercifully, that means no Clinton-promised “Obama third term.” America has finally been liberated from these twin progressive scourges. His was an utterly failed record: defined by divisive rhetoric, an almost Messianic cult of personality, and delusions of grandeur. (Specifically, Obama desired to dismantle the goodness embodied by “apple pie” Americanism.) On the other hand, hers is endless lies and scandals (strongly suggesting lawbreaking and corruption). Today, America is in far better hands, but only in relation to the grizzly alternative. Clearly, shifting from a dogmatic leftist ideologue to a populist outsider is an improvement. Yet, what remains is the unyielding quagmire of beltway elites (of both parties) coupled with Trump's surface narrative of “winning”.

For Mr. Trump's showiness, let us not be reminded of smirking selfie-obsessed Barack Obama. A superficial politician of illusory “accomplishments” (and hard leftist transformation who Bill Clinton pegged correctly as “an amateur”). Obama—the worst president of the modern age—was defined by a fatiguing number of inauthentic, self-congratulatory victory laps (between 333 rounds of golf per CBS reporter Mark Knoller). What's more egregious, his exchange of likely traitor Bowe Bergdahl for five high-level terrorists, his U.S. Iran payoff of 1.7 billion, or his U.S.-Iran nuclear “deal” that wasn't? In every case, geopolitical adversaries were coddled and emboldened. Meanwhile, Obama claimed legacy-defining “successes” while America suffered domestically and receded further from relevance on the international stage.

One hopes that the election of a real winner—a billionaire capitalist epitomizing the American Dream—will not follow suit. Indeed, doesn't such a person know the difference between Obama's show business tenure—and brick and mortar substance? Unfortunately, thus far, that remains to be seen. Specifically, the ObamaCare Lite “Republican” health-care bill, such as it is, finally squeaked by the House of Representatives. As it still faces the daunting and uncertain hurdle of passage in the Senate, it's hardly a done deal. Therefore, why did President Trump recently declare victory in the rose garden flanked by a phalanx of clapping, smiling GOP flunkeys? Obviously, pro-American deal-making is necessary. Yet, isn't the devil in the details? Why are they being glossed over by this president in the same careless manner as the disastrous last one?

In fairness, Donald Trump has quickly discovered that confronting the status quo (read: “draining the swamp”) of the beltway bubble is a Herculean task worthy of that demigod's twelve punishing labors. This progressive/RINO “new budget compromise” funding the government through September is a measure precisely antithetical to the new president's priorities. Why then do they bankroll America's primary abortion provider Planned Parenthood? (For context, this organization was founded by one of Hillary Clinton's heroes, Margaret Sanger: an unapologetic racist and eugenicist. Thus, the reason it's overwhelmingly found in minority neighborhoods is no mystery.) Likewise, the GOP supposedly opposes sanctuary cities. Yet, those lawless enclaves—that regularly endanger local citizens' lives (read: San Francisco's Kate Steinle killed by a repeatedly deported illegal alien)—are fully funded too. Aren't Congressional Republicans supposed to be pro-life in all its guises?

Related to criminal border jumpers and the unnecessary cost of lives, what of Trump's pledge to build a U.S.-Mexican wall? Of the Republican response, Breitbart astonishingly reports:

So, there's zero allotted to the meaningful construction of a long overdue physical barrier? By comparison, contrast that to the $295.9 million funneled to bail out Puerto Rico's bankrupt Medicare system. How is giving more money to island wastrels a good idea? Isn't that the definition of flushing good money after bad? What does this two-faced Republican majority actually stand for—besides themselves?

How else does one explain their intentional disregard of President Trump's election-winning agenda? Hence, a long-standing political pattern emerges from the murky bowels of the political swamp. In practice, Nancy Pelosi's priorities are indistinguishable from Paul Ryan's. Put simply, they're all entrenched Washington “swamp creatures!” Remember when this newly minted House Speaker promised a “fresh start?” Right out of the gate, what did he deliver? He rubber-stamped the progressives' 2 trillion dollar budget! Today's budgetary expenditures are just more of the same.

Paul Ryan and his weak-willed ilk habitually capitulate to Democrats despite their “leadership” position. Then, amazingly, victory is universally declared. Both sides crow about something “good sounding” at first blush. Yet, ultimately, their shortsighted choices are unmistakably detrimental for the well-being of future generations. You know, those-yet-unborn left to pay the tab of irresponsible largesse. In truth, what are these out-of-touch elitists really doing—besides rearranging the deck chairs on the Titanic (read: the iceberg that is America's escalating 19.9 trillion dollar debt)?

Speaking of massive, what's a bigger ego-trip then being a U.S. president? Still, Mr. Trump must resist Washington's insulated grandiosity. (A temptation so vulgarly indulged by his preening predecessor.) As a lesson, Ronald Reagan never engaged in such self-glorifying impulses. In this regard, he should consider William L. Jenkins's words as a template:

Thanks to the ballast of the intractable D.C. swamp, the country remains in economic dire straits. That fragile state is equally due to spineless establishment Republicans and obstructionist, spendthrift progressives. For lasting success, Mr. Trump needs to continue to champion sensible, conservative policies. That means bringing needed doses of main street reality to heedless establishment power. Specifically, Congress should be held accountable with the veto, the bully pulpit, and at the ballot box. Echoing Obama's absurdist practice of premature, or completely unwarranted, self-serving “wins”—is a worthless photo-op, as valid as the most recent president's campaign hype that he could “heal” the planet, or “control” the rise of the oceans. That's the stuff of patients typically found in mental wards. Or is it the decision-makers in Congress? By their results and popularity, who can tell a difference?

Average citizens have had enough of swamp creatures: especially their hollow claims of “victory”. That much is clear. Despite our elected officials' rosy proclamations, rank and file Americans aren't close to experiencing legitimate wins. That's a vital distinction President Trump must make for his—and America's—enduring success. It's the only standard that means anything—and the only way to secure the future of our teetering nation.