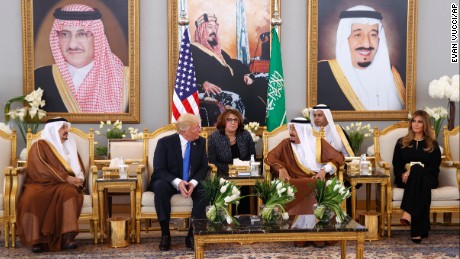 President Trump rang the bell, hit the bull’s eye, and drove the nail with his speech to Saudi, Egyptian, Jordanian, and about fifty other Muslim national leaders. He was presidential and politically astute especially when he said, “America is a sovereign nation and our first priority is always the safety and security of our citizens. We are not here to lecture –– we are not here to tell other people how to live, what to do, who to be, or how to worship. Instead, we are here to offer partnership –– based on shared interests and values –– to pursue a better future for us all.”  Masterful!
He adroitly managed to tell the truth without telling all the truth; however, he was not correct when he said, “This is not a battle between different faiths, different sects, or different civilizations.” That was not only wrong, but super-wrong and knowledgeable people know that we are in a battle between Islam and Christianity; a battle between Sunnis and Shiites; and a battle between a culture based on the Bible and a culture based on the Koran. It is not very smart to make a public declaration that sane, honest, informed people know to be false.
But, what did Trump refuse to say? What are the issues he did not discuss?
*The president did not say that the Kingdom of Saudi Aribia is home to the Wahabi sect of Islam that is probably the most vicious, violent, and visible in the world. A 2006 report by the U.S. Department of State revealed, “Saudi donors and unregulated charities have been a major source of financing to extremist and terrorist groups over the past 25 years.”
A European Parliament report estimates that Saudi Arabia has spent over $10 billion to promote Wahabism through Saudi charitable foundations. Trump did not demand that such financial support cease.
About Saudi Arabia, Trump wrote in 2011: "It's the world's biggest funder of terrorism.” But Trump did not bring that up in his speech.
*He did not say that the Wahabi sect funds most of the mosques in America nor did he announce that no additional mosques would be built in America until an equal number of churches are permitted in Saudi Arabia!
*He did not say that there is not a church or synagogue in all of Saudi Arabia nor did he support my position of eight years ago that the Kingdom should permit the Trinity Baptist Church to be established in Mecca, Medina, and Riyadh.
*He did not say that females should receive equal treatment as men. They should be permitted to drive, work, and marry whom they choose, divorce on the same basis as men, and not be forced into childhood “marriages” - with old dudes or young dudes.
*He did not demand that female genital mutilation (FGM) cease in the Kingdom and the Muslim world. He did not condemn popular Saudi Sheikh Mohamad Alarefe’s statement to 8 million followers that “Circumcision [FGM] is a noble act to do to women.”
*He did not say that since we are all good friends, the Saudis should permit Christian workers in the American Embassy and oil workers to have the right to celebrate Christmas in their own homes without harassment from Muslim police.
*He did not turn to President el-Sisi of Egypt and ask for the right of churches in Egypt to get permits to repair their buildings or even build new ones.
*He did not say that any person should have the right to choose his or her religion without any coercion, and change it if they don’t like it.
*He did not say that honor killings are never justified and perpetrators should pay the severest penalties.
*He did not say that since we are all buddies, it would be nice if the Saudi government recognized what everyone in the world knows: the nation of Israel is a reality.
It was significant that Melania did not wear a headscarf that is required by all women in Saudi Arabia. Nor did Trump bow to the king, as did Obama who bowed from the waist. I liked that part of the ceremony.
Some Trump critics say Trump did bow but that is desperation, deception, even dishonesty speaking. Trump was receiving a medal and had to squat, not bow, to permit the king to place the medal over his head.
But even if it were so, it was not an Obama bow (and kiss on the hand of the Saudi king) or like President George W. Bush who diplomatically kissed and held hands with Saudi royalty during the royal visit to Bush’s Texas ranch! That silly, disgraceful act gagged every buzzard on the Chihuahuan (Texan) Desert.
Americans don’t bow to any human. And they don’t bow much to God either.
Copyright ©2017
Read more by Don Boys, PhD
Tweet