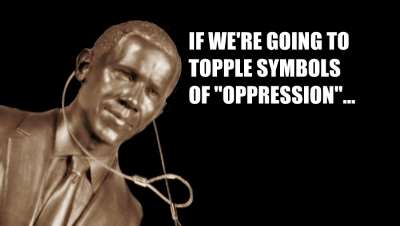 Why are progressives clamoring to remove many of America's mementos dedicated to the Old South? Generations later, can remnants of Civil War Democrats cause active psychological “harm”? That seems highly unlikely. However, what's real is the targeting of Robert E. Lee, J.E.B. Stuart, and Jefferson Davis. If that's the liberal standard for destroying their icons, who has caused more recent and lasting damage than Barack Obama? Therefore, isn't it logical for them to purge both ancient root and modern branch? Yet, fear not, President Obama is safe from their revisionist historical pruning. It's only his antebellum counterparts who find themselves on the chopping block.

Let's pull some contextual threads from this spidery progressive web, shall we? Reportedly, Democrats in Alexandria, Virginia, want to rename a main thoroughfare, Jefferson Davis Highway. Also, they want to move a statue on State Route 400 of a Confederate soldier, “Appomattox,” to the comparable obscurity of a nearby museum. Erected in 1889, is the presence of this unarmed Southerner—like the street named for the Confederacy's president—suddenly noxious to the average commuter? Do they trigger so much daily trauma that they're right to nix them? Not to be outshone, Fairfax County is embroiled in a two-year debate to strip Confederate General Stuart's name from one of its most racially diverse high schools. Their dragnet is not local however, it's a monstrosity cast widely across state lines as far as Louisiana.

As the left's revisionist hysteria is never satisfied, Stuart's famous contemporary General Robert E. Lee is targeted in both places. Atop a pillar since 1884, his towering figure was removed from its New Orleans perch last Friday after 133 years. (His was not the first to fall. On May 11th, the powers that be removed a statue from the Jefferson Davis memorial there. On Saturday, a display—the word “LOVE”—was found on its vacated platform.) Only time will tell if his Virginia likeness—mutely astride his majestic horse in Lee Park since 1924—will suffer the same “loving” fate. As the land was specifically donated to showcase this Southern soldier, is it right to unseat him after 93 years? What's more horrible here, destroying the vestiges of progressives' 19th century past or the wasteful expenditure to taxpayers of $300,000 to do it?

Doesn't all history have a worthy place simply because it happened? How can eradicating the lessons that shaped our collective cultural experience ever be the “right” thing to do? Isn't the mindset to wipe clean the landscape—of old dignitaries' names and harmless inanimate objects—really a fascist desire to ban ideas themselves? (Will these safe space liberal “do-gooders” advocate “Fahrenheit 451”-style book burning next?) Obviously, their predecessors' dual stains of slavery and segregation—never acknowledged or owned by them hereafter—are of lasting shame. Well, frankly, they should be. Hence, their current self-serving agenda to simply airbrush monuments out of existence.

To this end, their go-to narrative is one of distraction and manipulation. To the muddleheaded, the dishonest proclaim often repeated nonsense: America is “secretly racist!” In the same vein as “Trump Derangement Syndrome,” liberals have kind of a politically-motivated hysterical blindness. What of the widespread advancements since the 1950s and 1960s Civil Rights movements? A prominent trend—the “black is beautiful” paradigm shift of the '60s and '70s—doesn't matter? Heck, these naysayers don't even acknowledge the cultural significance of the former occupant of the White House! So, concrete facts of societal progression are meaningless to them - what has meaning is only their deluded aim to erase transgenerational political sins.

Seriously, it's been 152 years since the end of the Civil War! Only misguided spendthrifts waste today's public funds to “purify” the past. Obviously, historical footnotes—like the name of a road or a school, or four statues—have no magical power to corrupt anything of the now. What relevance to the day-to-day life experience of Americans do they really have? Very little, if any. In fact, their only intrinsic value are as markers showing where America has been—and how truly tolerant she has become!

Despite these ridiculous assertions, racism is not infused in the bronze edifices resembling long-dead Southerners. Likewise, it's not found in the hearts of persons striving to preserve them either. Interestingly, only Democrats' self-hatred persists with the passage of time. That liberal malady is seen in their psychological projection of guilt upon the rest us whose ancestors likely never owned a slave. Clearly, that's a problem better suited to the analyst's couch than the political realm. (On a related note, can our country be correctly viewed as innately “sexist” as Hillary Clinton is the latest nominee of her party—and the winner of the popular vote?) All elements described above encapsulate the schizophrenic thinking pervading every level of the Democratic Party.

In truth, tangible proof of America's well-established—and ever-expanding—pattern of embracing and celebrating diversity is everywhere! What of commonplace interracial marriage or the recent legalization of gay marriage? So, is it fair to automatically demonize a Republican simply for expressing a history-protecting impulse? Virginia's firebrand GOP gubernatorial hopeful Corey Stewart recently said:

“There are all kinds of things that offend people, but that [removal] doesn’t make it right. That doesn’t make it so [fix the past]. This [the statue of Robert E. Lee] is a part of our history; if you don’t like our history, that’s too damn bad.”

Well, precisely. What's crystal clear is the Democrats have a cringeworthy history. Understandably, they're desperate to annihilate any reminders of the irrefutable and indefensible. Chief among them is their sole ownership of two infamous institutions: Virginia's antebellum past (read: slaveholding) and white supremacy (read: creating the Ku Klux Klan). As Abraham Lincoln preserved the Union, his party has a duty to safeguard the other side's artifacts for posterity. Without them as silent witnesses, falsely tarring conservatives with their own ongoing record of misdeeds becomes easy. If successful, all that would remain is a nebulous war of words for progressives to dominate. As George Santayana wisely advised: “Those who cannot remember the past are condemned to repeat it.” Ironically, destroying America's Confederate past also diminishes her freedom-loving future.