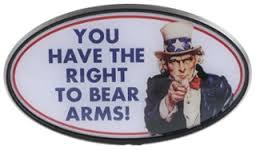 Many Americans suffer from a common phobia. No, it’s not the very reasonable fear of Democrats running the country. That’s not a phobia, for it's not irrational. No, they suffer from an irrational fear of guns. Guns are not inherently scary. They are just a tool - like a screwdriver or a leaf-blower. You've heard the saying, the right tool for the job. You wouldn't use a gun to blow the leaves around your yard, and similarly you wouldn't use a leaf blower to defend yourself. You could try, but I’ll bet it won’t go well.
Yet over the years more and more citizens have been purposely conditioned to think guns are scary. Thus the “Gun Free Zone” was established. These days there are more and more “gun free zones” than ever.
Yet economist John Lott found that, “Since at least 1950, all but two public mass shootings in America have taken place where general citizens are banned from carrying guns. In Europe, there have been no exceptions. Every mass public shooting — and there have been plenty of mass shootings in Europe — has occurred in a gun-free zone.”

Bet you won't hear that fun fact from the anti-gun lobby.
We hear that restaurants like Starbucks, Chipotle, and Panera Bread, and chain stores like Target have become gun free zones. Yes, Target allows men and little girls in the same dressing area, but won’t allow guns. Ask a mother or father which is scarier – a law abiding person with a gun, or a creepy old man watching their daughter undress.
Although it’s a stupid policy, I agree with them. They are private businesses and have the freedom to invoke such a policy.
What bothers me is those on the right who complain about it. Not regarding these restaurants or stores specifically - but how they have mistakenly framed the argument. And hopefully it’s just a mistake.
A few years back Starbucks made the announcement that they were going “gun free.” Steve Doocy and Brian Kilmeade on Fox and Friends, were discussing gun free zones in general and Starbucks specifically. They both agreed that in a state where open carry is legal, people should have the right to walk into a Starbucks with a gun. Shockingly, I heard Glenn Beck say something similar.
Can you see what’s wrong with this argument? It leapt out at me.
Has anyone read the Constitution lately?
Has anyone read what the founders and authors of the Constitution said about guns? I was stunned when I heard, “if a state permits open carry,” from learned men and advocates of the Second Amendment.
How did they miss this – or do they just not listen to their own words? How dare any state in the union attempt to or already successfully usurp the Second Amendment to the U.S. Constitution! This is clearly illegal. It’s like saying, “if a state has free speech laws, it's okay to speak out against this or that.” The very premise is absurd and no one would stand for such usurpation or abridgement of the First Amendment.
It's ridiculous and clearly unconstitutional to tell me I can't “bear” my firearm. For those who are unfamiliar, to “bear” is synonymous with to “carry,” either openly or concealed. They made no distinction. And neither the founders, nor the Constitution ever mentioned anything about licenses or permits.
Putting that rant aside - it is even more absurd to mandate military bases as “gun free zones,” where personnel may not even carry their own personal firearms.
Many blame the Clinton administration for this, but it was actually a Department of Defense directive signed in 1992 by the kinder, gentler George HW Bush's Secretary of Defense.
Are we not the laughingstock of the world - soldiers who can't carry guns. Oh wait, they can have a gun. Remember the 2013 DC Navy Yard mass shooting? One of the parents of a Marine at the DC barracks said that her son claimed they had weapons… wait for it… but they weren’t allowed ammunition.
And there's the punchline to the sick joke that are “gun free zones.” The Marine went on to tell his parent that three people had been shot at the time and they could have prevented the rest from being killed if only for bullets.
Folks; this stuff is all common sense. More guns in the hands of the good guys (and girls) is the only deterrent for heinous acts. These types of killers are cowards and wouldn't dare try this in a facility where armed citizens are known to be present.
Copyright ©2017
Read more by Brent Smith
Tweet