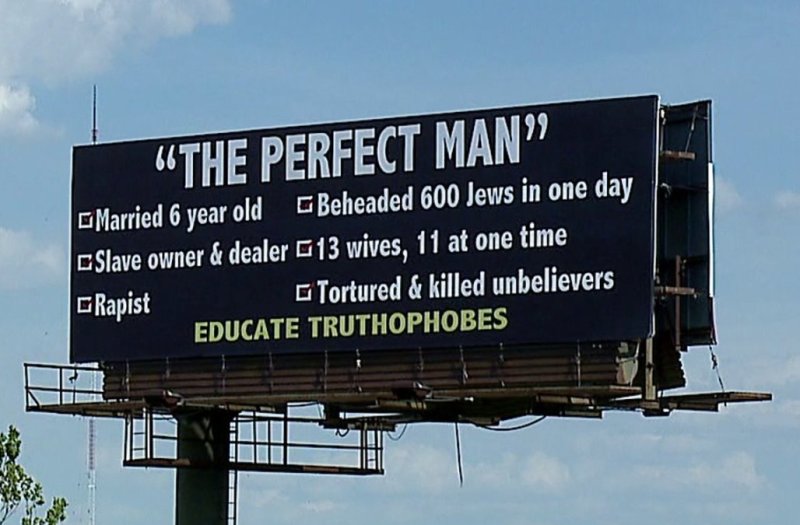 Muslims in Indianapolis are having a hissy fit over a billboard that reveals some facts about the life of Mohammed.
I know something about Indianapolis since I lived there for 30 years. I was administrator of a large Christian school and was elected to the Indiana House of Representatives. In 1960, I pastored a small church down the street from where the offensive billboard is located.
I also know something about Islam since I have written two books on the subject and discussed the subject hundreds of times on talk shows, interviews, and messages. My first Islam book was Islam: America’s Trojan Horse! and a recent book is Muslim Invasion: The Fuse is Burning! Both titles reveal the gist of each book.
I interviewed Muslim clerics in Indianapolis for my first Islam book and the results were shocking. In that interview, I asked, "Are you willing to characterize the suicidal bombers as homicidal bombers?" I thought I might get such an admission; however, I got much more than I expected. One of their most respected leaders calmly asserted that they "were freedom fighters." He confirmed this statement a few weeks later by telephone. "They are freedom fighters.” That is proof that some ‘moderate’ Muslims are supportive of terrorism.
That dude, who defends killing innocent people, could be rubbing elbows with my grandchildren in the Greenwood Mall as I write!
That is one time a Muslim leader was not devious, disingenuous, or dishonest! He told the truth as to what they believe. However, leading politicians and even conservative religious leaders refuse to understand that all dedicated Muslims are seeking to control America.
The offensive billboard was correct. One news source wrote that it “insults Prophet Mohammed.” USA Today reported that the message is “offensive and untrue;” however, just because it is offensive does not mean it is untrue. The statement is true, but no one is dealing with that fact. Everyone seems to be concerned with Muslim feelings. Frankly, I am weary of being so sensitive of Muslim feelings especially when most of them don’t seem to care about the destruction they are wreaking upon America.
The billboard was headed, “The Perfect Man” followed by six items in the list:
No one has pointed out that Mohammed’s name is not mentioned nor is Islam mentioned. So, why did the Muslims get their knickers in a knot unless they know what every history book teaches about Mohammed?
NBC quoted a Muslim puppet: “These are completely false statements,” said Rima Shahid, executive director of the Muslim Alliance of Indiana, who found out about the billboard through an anonymous tip. She added, “I’d really like people to read about the seven points that are mentioned on the billboard because you’ll find that none of them are true."
All the statements were true except the reference to Mohammed as “The Perfect Man.” At least everyone who has taken a World History class knows that. But then, many major universities don’t require history of their students. But even an intelligent Christian high school student or homeschooler is aware of the truth of the statements.
Frankly, the billboard really understates most of the facts. Mohammed did marry a six-year-old girl but waited until she was nine to consummate the “marriage.” After all, it might be classified as child abuse if he had sex with a six-year-old! He was a slave owner; he was a rapist; he did order the beheading of at least 600 Jews in one day although some historians report that it was 800!
And those Jews were not combatants, only people who did not give Mohammed the support he expected during a battle. Most historians report that he had more than 13 wives, concubines, and a female slave with whom he was very close; and of course, he did torture and kill unbelievers–as supported in the Koran and Hadith.
According to the Indianapolis media, the Muslim Alliance of Indiana plans to raise money to put up its own billboard “to spread a message of peace and kindness.”
Sounds good and reasonable. I suppose they will reveal that almost all the terrorist acts in recent years have been done by Muslims!
I suppose they will admit that the daily carnage in Syria, Iraq, and Afghanistan is produced by Muslims and against Muslims.
I suppose they will quote the Muslim professor who said, “Allah allows Muslims to rape non-Muslim women in order to humiliate them.”
I suppose they will reveal that child brides are common, even demanded, in Muslim-dominated nations!
I suppose they will reveal that female sexual mutilation (FSM) is common in Egypt, Pakistan, and is taking place in America! Maybe 100 cases in Michigan alone! Where are all the child advocates?
I suppose they will reveal how Muslims are beheaded and limbs chopped off for minor crimes in Muslim nations!
I suppose they will report the many “honor” killings that have been done even in America and are common in Muslim nations!
I suppose they will quote one of their most respected scholars–Abdel Raham–who taught that the terrorists are the true Muslims!
I don’t expect Muslims to admit the above facts since common decency would force them into apostasy; but I don’t understand how any principled media (oxymoron?) person can be so uninformed or so dishonest or so fearful of their position that they refuse to admit what every educated person knows: Islam has been a scourge to the world for 1400 years, and it is a scourge that America must deal with from now on.
The fuse is burning and America and the world are holding their breath waiting for the next Islamic attract upon free people. We are in a Hundred Years War with koranic Muslims.
The fuse is burning and the clock is ticking.
Copyright ©2017
Read more by Don Boys, PhD
Tweet