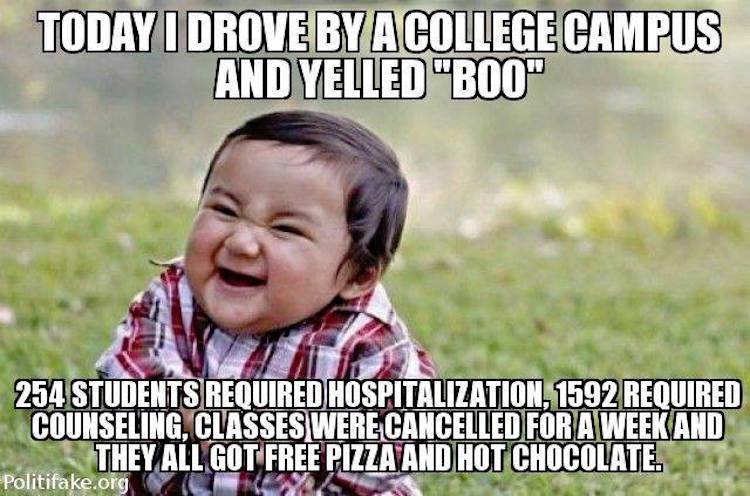 It’s graduation time across the country and among those freshly minted entrants into the adult workplace will be who knows how many unfortunate recipients of an educational system that has force fed them a steady diet of entitlement. Even worse, recipients of this system have been saddled with the debilitating baggage of being taught to complain, cry, and protest any thought, deed, or opinion that does not conform to the bewildering and constantly changing rats nest of rules that comprise political correctness.

And let me be perfectly clear. I do not blame these young graduates. It is not their fault. They did not choose to be indoctrinated any more than did young Germans, Russians, or Chinese choose to be brainwashed by totalitarian regimes that taught them to hate and fear all other thoughts and opinions that diverged from the orthodoxy of the rigid, closed-minded partisans who propagated it.

Thank God my kids all graduated from college before the days of safe spaces, comfort ponies, and trigger warnings. Because if I had been forking over tens of thousands in tuition and all my kids knew how to do upon graduation was huddle in the basement feeling aggrieved and entitled, I would be demanding an immediate refund!

And again let me stress - I don’t blame these kids. They didn’t attend college to be brainwashed - they didn’t have a choice. In most cases it was the stark option of 'regurgitate or fail.'

Pity those kids who were conservatives or who were so blessed with the spirit of curiosity that they just couldn’t accept indoctrination and chose to question and fight back. In addition to risking failure they were often bullied, ridiculed, and ostracized for their courage. But upon graduation they took away from their learning experience one thing that their less independent peers did not - the ability to question, analyze, decide and ultimately think for themselves.

So if you were looking to hire a trainee or new, young ambitious employee, which would you go for?

The pampered, pouting, angry snowflake, quick to take offense and wander through the workplace insuring everyones compliance with the politically correct directives of the day, like some junior commissar of old?

Or a bright young kid who can roll with the many punches and setbacks which are a part of the real world and come up grinning with a solution?