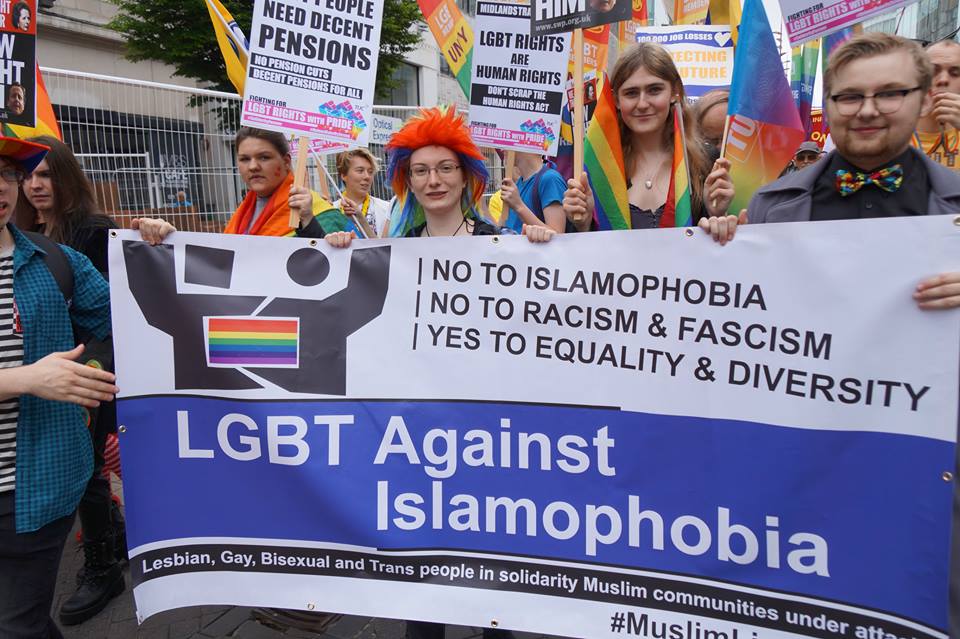 The left thinking has fallen into deep reprobation as long ago prophesied.

"...For this reason God gave them over to degrading passions; for their women exchanged the natural function for that which is unnatural, and in the same way also the men abandoned the natural function of the woman and burned in their desire toward one another, men with men committing indecent acts and receiving in their own persons the due penalty of their error. And just as they did not see fit to acknowledge God any longer, God gave them over to a depraved mind, to do those things which are not proper..."
(Ro 1: 26-28 - New American Standard Bible)

Dr. Don Boys, former member of the Indiana House of Representatives and author of Muslim Invasion: The Fuse is Burning, says,


“In the last few days, concerned Americans across the nation have participated in 'anti-sharia' protests. Those citizens have been criticized, castigated, and condemned for their 'bigotry.'

"However, it is a fact, not falsehood or fallacy, that dedicated,koranic Muslims want to live under sharia in America. It’s time to stop playing games and realize the reality: terrorists are beating at the gates of Europe and America.”
Boys is a pull-no-punches author who warns that we are all skirting around delusion and national death, in an article entitled “Sharia Would Lead to Total Control of Your Life!” [Also to be seen in this edition of Conservative Truth], and he concludes with this grave warning:


“Anyone who disagrees with the above assessment of Islam is uninformed or dishonest.”

In the recent anti-sharia protests across 28 U.S. cities crowds of pro-sharia activist carrying signs that read “No hate, no fear, Muslims are welcome here,” but at the same time, altercations and fights broke out amidst a lot of evident Muslim hatred.

Muslims sling around terms like “Islamophobe” to berate citizens who want to protect the free democratic form of government first born in this republic.

Sharia is a throwback to seventh-century draconian oppression where, women are mutilated, treated as cattle, and stoned for minor infractions. Children are severely punished by chopping off extremities. And beheadings of all those who refuse the Muslim Religion and the concomitant Sharia hype is considered status quo.

Anyone who seriously wants Sharia law must be a closet sadomasochist without regard for humanity, but for the dumbed down or as stated, the emerging reprobates - this goes unseen.

The fact that during the anti-sharia protests, gay pride parades were underway throughout the nation, in various cities, creates perhaps the biggest non sequitur and dichotomy of activism and ideological confusion ever seen in this nation.

Seeking more acceptance for the gay lifestyle and acceptance of Sharia law is like trying to mix oil and water. Sharia would ban and severely punish homosexuality.

At least, now the Bible believing Christians, who stand by the biblical teachings that sodomy, is still an abomination in the sight of God, are not seeking the heads of the gays. Under Sharia that would change.

In many Muslim nations gays are still hunted down, thrown off buildings, beheaded, and publically humiliated.

This obvious non sequitur says only one thing – confusion reigns.

But confusion of face and an inability to discern right from wrong are both the products and the fruit of a reprobate mind.

Those who do not labor under the ridiculous presumption that all popular religions are “great” religions, know that the world doesn’t need any more great religions – it still only needs a Savior.

The Jewish priests in Jesus’ day came closest to figuring out that God doesn’t want whole nations to die for sin or for a religion.

The High Priest in that day said, “And one of them, named Caiaphas, being the high priest that same year, said unto them, Ye know nothing at all, Nor consider that it is expedient for us, that one man should die for the people, and that the whole nation perish not. And this spake he not of himself: but being high priest that year, he prophesied that Jesus should die for that nation.” (John 11: 49-51)

This was recorded in John’s gospel and only John saw beyond the high priests' limitations. John knew that Christ was dying for the entire world, not just one nation. To wit:


“And not for that nation only, but that also he should gather together in one the children of God that were scattered abroad.” (Jn 11: 52)

The Muslims don’t see that no one should die for any religion, and the Sodomite can’t see that Christ died for them and they must stop flaunting their sodomy and painting it with pride and the colors of the rainbow.

Sodomy is still sin and Sharia is still a byproduct of a demonically induced vison that crept out the caves of Medina long ago and has spawned a world full of terror in the present day.

Reprobates can’t figure this out.

The prophetic message of the Scripture long ago warned of this day - the answer is both simple and yet deeply profound. All gross sin and religious error is aimed at the Christ, the Son of the Living God, and the only legitimate heir of all the kingdoms of this planet.

The clamoring for Sharia and the pride wasted on the sin of sodomy are only vanity and rage in action. No mystery here.


“Who by the mouth of thy servant David hast said, 'Why did the heathen rage, and the people imagine vain things? The kings of the earth stood up, and the rulers were gathered together against the Lord, and against his Christ.'” (Ac 4: 25-26)

Asking why the heathen rage is not a poetical or rhetorical question, it has a full answer provided by the rest of the scriptural message.

It is one of those full orbed, but simple answers that men tend to stumble over thinking that it could not be that simple.

It is called the great law of reciprocation and is a recurring theme of the Bible, the best example being found in Galatians 6: 7.

The law of reciprocation means that the tensions and troubles that now plague our present world did not come on us like a lion which springs from the bush; rather, it was and will always be our choices that set the stage.

We are all picking and choosing our own path and as pickers we will reap the consequences of our choices.

In today’s world of tolerance and diversity we are urged to believe that there are no collective consequences for our decisions, if we are comfortable that’s all that matters.

In university we are told to pick our courses, our hiding places and safe zones, while the world heads toward the brink of its own annihilation.

In political persuasions we may pick a conservative choice that leads to nobility, the good of our neighbor and our nation.

Liberalism says you can pick any confusion you like. Law and better judgment are only around for your convenience.

Hollywood says pick the flesh - party, waste, and fill the cup to overflowing.

Religionists say we can pick from the potpourri of diverse beliefs which are all lovely little pathways to a pseudo-god who is impotent and dopey.

Islamists say choose the “religion of peace” but offer one hundred verses of the Quran that say you may harm or kill anyone who won’t accept Islam, followed by terror and confusion for all those who will not submit.

Christianity asks us to choose the Prince of Peace and the love of God. Is there really a choice here at all?

The biblical message gives us only one choice. Since there is only one Savior who gave his life for your sins and mine, and only one God who has the right to judge the living and the dead – choosing the right Savior leads to only one conclusion.

Christ’s words are not just the best because the Christians say so; they are the only choice based on what Christ did. Pick these words.