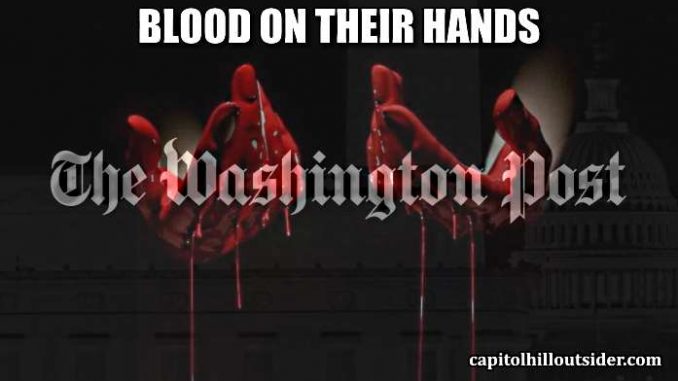 A historically pro-American day—June 14th—has been marred by the leftist violence of a lone gunman with the blood of innocents spilled. Previously, this date was a celebratory one: the 100th anniversary of Flag Day, the 242nd year of the founding of the U.S. Army (motto: “This We'll Defend”)—and for good measure President Trump's 71st birthday. Who will remember any of that after Wednesday's incident?

All these reasons for joy have been overshadowed by the wielder of a semi-automatic rifle—an outspoken campaign volunteer for (Democrat colleague and socialist) Bernie Sanders (I-VT)—who shot at some 25 Republican Congressman, and staffers, at Simpson Park in Alexandria, VA.
Per law enforcement, the deceased suspect is identified as James T. Hodgkinson of Belleville, IL, 66, the former owner of a home inspection business. His reported 10-minute melee happened just after 7 AM EST in which some 60 rounds were fired. The attack disrupted the Republicans' baseball practice for an annual charity game with Democrats. Held Thursday night at Nationals Park, this 108 year tradition, started in 1909, was interrupted by the Great Depression, World War II, and a brief pause from 1958 to 1961 as the event was thought then to have become “too physical.” Speaking of risk to life and limb, eyewitness Sen. Rand Paul (R-KY) said to MSNBC, “Had they [Capitol Police] not been there, it would have been a massacre.” Ah, the obvious value of armed good guys when those present would have otherwise been sitting ducks.

The two-person protective detail would not have been there except for the fortunate attendance of House Majority Whip Steve Scalise (R-LA). This circumstance prevented what very likely would have been a killing field. Unfortunately, Mr. Scalise was shot in the hip, has been hospitalized for surgery, and remains in critical condition. Likewise shot were police officer Crystal Griner, Congressional aide Zack Barth, and lobbyist Matt Mika, before Hodgkinson's threat was nullified.

On March 22nd, this assailant wrote on Facebook, “Trump is a Traitor. Trump Has Destroyed Our Democracy. It’s Time to Destroy Trump & Co.” In retrospect, Hodgkinson apparently meant that statement literally. Instead of accepting the peaceful results of the ballot box, he picked up a weapon and specifically targeted a group of open-air Republicans. Per CNBC, Congressmen Jeff Duncan (R-SC) and Rep. Ron DeSantis (R-FL) described an encounter with the perpetrator who asked them if those practicing were “Republicans or Democrats” before the shooting. DeSantis—when shown a photo of Hodgkinson—confirmed he was the man who approached them.

Connecting the dots, how can this carnage not be politically motivated? Moreover, how is this attitude not, for example, reflective of the The Washington Post's anti-Trump masthead motto: “Democracy Dies in Darkness”? Yet, the MSM is not the only element doing the ongoing agitation. For example, speaking at the LGBT for Hillary fundraising gala in New York City back on Sept. 9, 2016, Clinton said:

“You know, to just be grossly generalistic, you could put half of Trump’s supporters into what I call the basket of deplorables. Right? The racist, sexist, homophobic, xenophobic, Islamophobic—you name it. And unfortunately there are people like that. And he has lifted them up. He has given [them] voice.... He tweets and retweets their offensive, hateful, mean-spirited rhetoric. Now some of those folks—they are irredeemable, but thankfully they are not America.”

How's that not an incendiary and hate-filled call to arms, of sorts? An unfortunate hangover of the polarization that defined the Obama years. Frenzied Democratic sentiments—typified by Hillary's—have long sown the seeds of discontent and alienation. Clearly, they have fostered this antagonistic political environment, contributing mightily to Wednesday's horror directed at Republicans. Fast-forward to 2017—and cloying Hillary's divisive drumbeat continues. On May 2, 2017, this ultimate Washington insider stated, “I’m now back to being an activist citizen and part of the resistance.” Laughably, she's an “outsider” now? Progressives, as she, intentionally use fiery language in the same spraying, destructive manner as suspect Hodgkinson's projectiles.

“There are too many guns on the street. We lose 93 million Americans [sic] to gun violence a day.” (The flummoxed politician repeatedly misspoke, meaning only 93 victims per day.)

Why do Democrats en masse—entirely and perpetually—ignore the pivotal reality of the user? Make no mistake, in righteous hands guns make society safer. They deter criminality and limit human causalities. That was conclusively demonstrated here. To that end, two armed heroes saved many lives otherwise possibly lost in that early morning ambush. The only person posing a danger was an unhinged supporter of Democrats. He was likely inspired to kill Republicans because of liberals' unrelenting, uncivilized rhetoric.