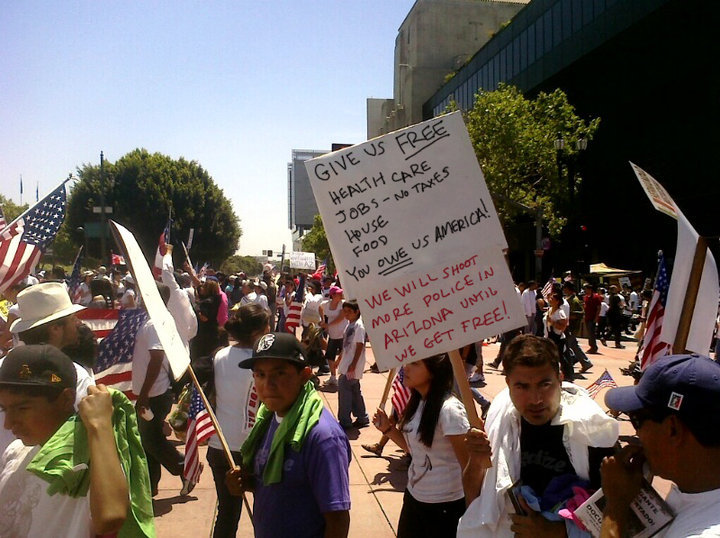 Conservatives have several issues to be concerned with these days. One that just keeps resurfacing is illegal immigration. Some are already blaming Trump for softening his position on illegals. This may or may not be, but the guy has been in office for less than six months, so I’m going to cut him some slack. To me, he appears to be doing what he can on his own, with seemingly zero help from the Chamber of Commerce-controlled legislature.
He is going ahead with border wall plans and mockups, and his anti-illegal rhetoric has apparently been effective at tamping down illegal entries. Yet while this is happening, liberal cities are still rolling out the welcome mat for criminal aliens.
Last week the Chicago Tribune wrote an editorial about, “A nationwide immigration rights initiative called ‘Welcoming Cities…’” They begin by tugging on the readers’ heart strings, saying, “Getting a library card or joining a PTA shouldn't be intimidating experiences. They are, however, for residents living in the country illegally and who often live in the shadows of society.”
I was frankly surprised they even mentioned the word illegal. And I agree – it should not be an intimidating experience. It should not be an experience at all. It’s stunning to read such a sentence, but to leftists, the words “in the country illegally,” is like water off a duck’s back. The irony is completely lost on these people. And this is not a news report. It is an editorial, which advocates a certain position.
Being that this is a Chicago Tribune story, they have concentrated on cities in their region. They write that many cities and school districts have begun instituting what they are calling “welcoming” ordinances. “Merrillville attorney and immigration rights advocate Alfredo Estrada has been at the forefront of the local movement. He's addressed city leaders and encouraged them to pass ordinances at local council meetings.”
The Trib writes that Gary, Indiana was the first to pass such an ordinance and Estrada claims that city crime rates have declined since they have passed them.
My how things have changed in Gary, Indiana since the Days of the “Music Man,” starring Robert Preston, Shirley Jones and even little Ron Howard, with his slurred rendition of “The Wells Fargo Wagon.”
But seriously. I’ll bet my bottom dollar this is an outright lie, but for the sake of argument, let’s say he is correct. I assume he is referring to violent crime, like rapes, murders, assaults, etc. These are far from the only crimes committed by illegals.
First, let’s say there is an entire neighborhood in Gary filled with only illegals that were happily welcomed. Every one is a criminal. They crossed the border illegally which is a federal misdemeanor. It should be a felony, in my opinion, but c'est la vie.
Second, and more importantly are the crimes that seem to go virtually unnoticed, or at least unreported. These are the crimes of fraud, which are not merely misdemeanors, but federal felonies and can ruin an unsuspecting citizen’s life for years.
Impersonating a U.S. citizen for purposes of employment, 18 U.S.C. § 911. This felony is punishable by up to three years in jail and a fine.
18 U.S.C. § 1001, refers to making fraudulent statements to the government, again, most likely for purposes of employment. This is also a felony punishable by up to five years in the slammer and a fine.
And remember - every job they illegally obtain is one less for a citizen.
But the worst of these felonies, which are always glossed over by the left, is 42 U.S.C. § 408. This regards Social Security, welfare and benefits fraud. An illegal obtains a Social Security number and uses it as his or her own. Many of these are stolen, which puts the rightful owner in dire jeopardy. Identity theft can be devastating to a citizen, and that’s exactly what this is. But this doesn’t seem to matter. So what if lives are ruined in the process of advancing the agenda.
The federal government should hold these city legislators liable as accessories for the fraud perpetrated by their illegal “guests.” Dirt bag lawyers like Alfredo Estrada, should also be charged with aiding and abetting. Maybe that will get their attention.
Copyright ©2017
Read more by Brent Smith
Tweet