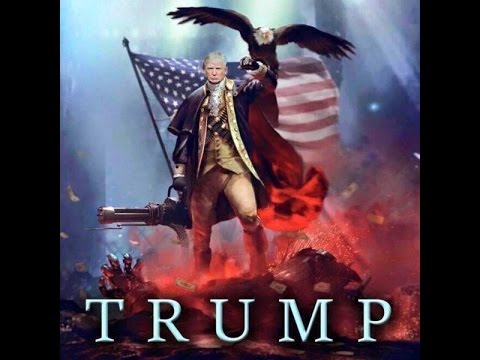 For decades the left has gotten used to having the field of petty, nasty, childish attacks all to themselves. They have internalized that while they can scream, pout, threaten, spout obscenities, and chant absurd mindless slogans that would embarrass a second grader, they have been secure in the belief that those on the right would always be the “adult in the room.”

And for the first time, here was someone on the right who was not playing by the rules they had set up. Namely that they could say anything and no matter how nasty, hysterical or just downright untrue it would be met by a quiet, sometimes sad and at most, exasperated sigh by the Right.

As those of us who have raised children through the “terrible two’s” and later temper tantrums so natural to all children (and Leftists) you might, at one point out of exasperation, have used the old parental ploy of responding to a particularly egregious outburst of bratty behavior with a simulation of what your child was doing. Thirty seconds into it, you would see that your child had stopped their own tantrum and was staring at you with stunned surprise. “Hey! Wait a minute… you’re an adult. You’re not supposed to act like me!”

And that is what happened when the Left met Trump

He is hitting back at them on their own level. And they don’t like it. They are the spoiled children who have been used to getting their own way. They have gotten used to being able to say and do anything they want without repercussions. They should be able to be petty, mean, snide, and nasty while sticking out their tongue at the adults on the Right.

Now, I don’t claim to know Trump's mind (I think that few do). So I don’t know if his constant Twitter barbs are a result of someone who lacks self control and lashes out whenever he gets pissed, or if this is really an elaborate strategy to confound the Left and keep them in a state of consistent unbalanced hysteria. If it is the latter, it is certainly working.

Therefore I am not one of the well meaning political savants who shake their heads over Trumps tweets and wish he would show more restraint. For whatever reason he is doing it, it just may have the effect of blunting the impact that the Left has always enjoyed with their hysterics by letting them see what happens when a bigger kid comes along and kicks them out of their own sandbox.

Is it necessarily the way I would prefer to see a President act? No. I prefer the Ronald Reagan style of inspiration and dignity. But if you look back at the past two decades and were given a choice between George W’s role of a dignified human punching bag for the Left and the DNC media cabal, or a Trump whose credo appears to be, ‘hit back twice as hard and beat them at their own game,' which would you choose? And if you use that example, what do conservatives have to lose? Consider - George W’s rising above it all left him and Republicans kicked and tarred with every mud ball the Left threw at them and ultimately led to eight years of Obama.

So then would asking Trump to act more reserved and emulate a George W. meek and mild response really somehow miraculously win the over the DNC media and make them his friend? Ummm… sure. Right after the moon falls out of it’s orbit into the Pacific Ocean (which by the way the Leftist media would accuse Trump of causing!)

So as I see it, since the Left-stream media (and no, I do not use ‘mainstream' as they are anything but) are never going to like him no matter what he does. And given past history, which has shown that trying to appease the Left only increases their scorn and level of attack, what then does Trump have to lose?

Seriously - they can’t loathe him any more than they do and from what I see on social media, there are huge numbers of average Americans who are glad to see someone fighting back against the unholy triumvirate of the Leftist media, outraged academics, and Limousine Liberals who have for too long held an unchecked sway over the public discourse.

So maybe Donald should repeat to the Left-wing Media/Cultural Cabal, the words of one of my favorite 80’s rockers, Pat Benatar who sang in her song, 'Hit me with your best shot': “Put up your dukes let’s get down to it.”