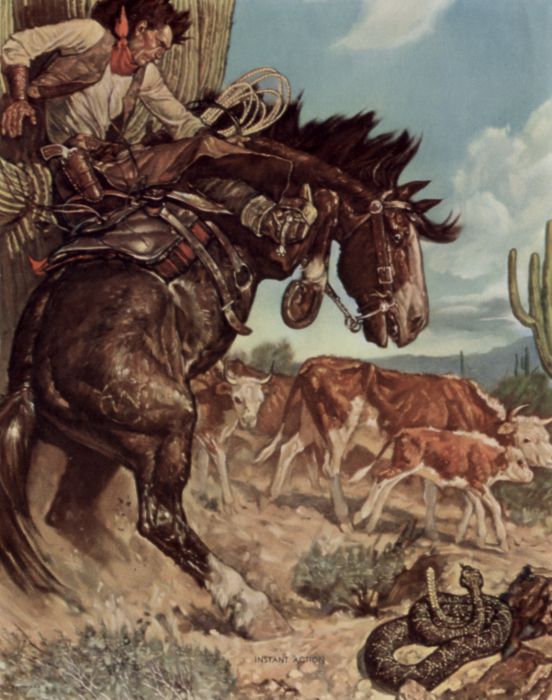 Years ago, I remember riding a horse named Apache. In his earlier years, Apache was a real cattle horse on Red Lake Ranch, near Socorro, New Mexico. When I rode Apache, he was at the OW Ranch near Forest Lakes, Arizona.
Apache, as most horses, had one unique characteristic his passenger needed to know about. Years earlier, Apache was bit on the nose by rattlesnakes, three times as I recall. The Red Lake Ranch in New Mexico was mainly rocks, dirt and little vegetation so his nose was always down, looking for some grass stubble to eat. Just perfect for the waiting rattlesnake. Now, in his mind, every dried stick, branch, or anything wiggly, was a rattlesnake. You have probably heard of the song, “I’ll Never Fall in Love Again.” Apache’s life’s song became, “I’ll Never Get Bit by a Rattlesnake Again.”
Fast forward to the pine tree covered OW Ranch. Pine boughs were new to Apache. Every pine bough he saw on the ground was a rattlesnake. The rider was second priority. Apache’s primary priority was “I’ll Never Get Bit by a Rattlesnake Again.”
Apache learned to side-step faster than a rattlesnake could strike. The problem was the rider (like me) got to share Apache’s life’s experiences. He could side-step five feet to the right as fast as a wink. In those panic attack times, Apache was five feet to the right and the rider was in the air five feet to the left. You felt his pain. That created phobias in other riders about Apache’s phobia.
Many times, what others have experienced becomes a part of our reality too. They project their experiences to others for the rest of their lives if nothing changes. Every pine bough is a rattlesnake. Everything is panic attack with no plan of attack. A life full of side-stepping, with little forward motion, created years ago.
Mark Twain notes, “A cat, after jumping on a hot stove, will never jump on a hot stove again. The problem is he won’t jump on a cold stove either.” What if you could say to Apache, “That pine bough is a pine bough. It’s not a rattlesnake.” What if Apache could learn to discern real danger from false danger? That’s called wise living, not just existing.
These days many people feel like they are circling the drain, caught in the eddy on their own wave. Perhaps they are already in the drain. Maybe that’s you. The problem with a panic attack is we do nothing but ride the wave downward.
When experiencing panic attack, we need a plan of attack. John Maxwell says:

One time a future king named David was hiding in a cave. He was being hunted by Saul, the current king. Saul wanted to kill him. David was circling the drain. But, instead of looking down, he looked up. He had a plan of attack rather than a panic attack.
What did David do? David expressed his honest feelings, problems, and needs to the Lord. He was way beyond what he could do in his own power and he knew it. Honest cries for help get God’s attention. Then David cried out and claimed God’s deliverance and a right attitude within himself.
Next David fought. David knew that trying to fight in his own strength while circling the drain would be like fighting an enemy unarmed. David’s choice and God’s power turned his temporary crisis into a permanent gift.
The last step was to give thanks to God. Getting to level ground may not mean God always answers our cry for help with the outcome we wanted. Getting to level ground means that you have done your part and trust God will do His part so things won’t come apart.
With some time and horse sense, Apache settled down. How about us? Use your horse sense. It leads to stable thinking.
Ed Delph       July 17, 2017   CCC
Copyright ©2017
Read more by Ed Delph
Tweet