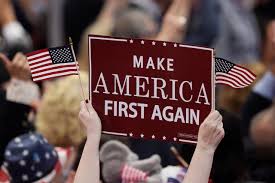 Many years ago when I was young, and dumb, and idealistic (as opposed to now when I am old, and dumb and cynical), I began my political affiliation as a Democrat.

Later, when I had gotten a decent job, was starting a family and paying taxes, I changed to Republican. Then eight years ago, roundly disgusted with both major political parties I switched again to Independent for voting purposes in primaries.

The problem is, there is no “Independent” political candidate to vote for. So once again I am forced to chose between which do-nothing, self-serving professional politician, interested only in lining his or her pockets, to ensconce in office, most likely for life.

Kinda’ makes you think that Mark Twain had it right when he said; “I don't vote for politicians, it only encourages them."It’s obvious to anyone who has been paying attention - and even to those who have not - that given our current political divide the two major parties in the US have little in common for the majority of voters who are reluctantly forced in every election to chose one side or the other - even though I suspect that neither represents most of the beliefs of their average constituent.

It’s obvious to anyone who has been paying attention - and even to those who have not - that given our current political divide the two major parties in the US have little in common for the majority of voters who are reluctantly forced in every election to chose one side or the other - even though I suspect that neither represents most of the beliefs of their average constituent.

So then why not take a closer look at the people who voted in the last election and what they were actually hoping for when they voted for a party or candidate.

On the side that voted Trump and Republican the majority of these were blue- and white-collar working and middle class voters who want nothing more than to provide a decent and secure life and country for themselves and their families. They love America, the Constitution, the founding fathers, the Bill of Rights, and traditional American values. They are the people who have fought the wars, tilled the soil, and built the country, and whether descended from pioneer stock or from the millions who immigrated (legally) from other countries dominated by brutal regimes and grinding poverty, they had one thing in common. They love America and the ideals it stands for, and unashamedly believe that it is the greatest country on earth. So if we were going to think of a name for a party that would accurately describe this group we could call them - The Americana Party.

OK - then what about the Democrats and Socialists that voted for Hillary and Bernie? Well most voted Democrat but actually the Dems and Socialists could fit together quite nicely, based on their beliefs, into a single party that we could call, The One-World Party.

And this fits. While the Americana Party wants tightly controlled immigration backed up with a wall, the One-Worlders want open borders and no restrictions. While the Americana’s want English as the official language, and deportation of all who hate America and are here only to bring about it’s destruction by violent means, the One- Worlders want every language in the world to be used and all signs printed in as many tongues as there are people who feel more comfortable speaking them.

Not only do the Americana’s want no welfare or benefits for illegal aliens, they don’t want to allow them to stay here in the first place. On the other side, the One-Worlders feel that anyone from any country anywhere who wants to come here for any reason should be welcomed with open arms and that it is the duty of America to feed, house, cloth, and provide medical care all for free, whether or not they work or contribute to US society - because we are all one world.

They feel that everyone in the world should be free to pick up and move to any place on the globe without passport or visa, and that the One-World government should provide every human being with a guaranteed income, housing, and health care regardless of one's ability to contribute anything back. You have a right to all these things merely by existing.

The Americana’s still believe in the old values of hard work, reap what you sow, and free enterprise.

Americana’s want a strong President who believes in America first. That’s why they voted for Trump. Sure we’ll help out other countries if it is in our national interest - but America’s first duty is to its own citizens.

One-Worlders want a weak President like Obama, who believes that he is just one representative of a world government that should defer to smaller countries to keep things “fair.” The One-World’s president's main job is to lecture the American people on thier social responsibility to the rest of the world and minorities and special interest groups at home.

Thus the irreconcilable enemy of the One-Worlder’s are the Americana’s because they cannot achieve the One-World vision as long as there are people who believe that their country, culture, or way of life is best. They advocate that there is no difference between Western society and those of the Third world that stone women, allow child brides, or promote brutal dictatorships. They are just…different. And all must be celebrated.

Americana’s like modern plumbing, backyard barbecues, freedom of speech, and the 2nd Amendment - and will fight anyone who tries to take them. And worst of all in the One-Worlder view - for over 200 years…they’ve succeeded.

Yup. The differences are a stark as day and night; but think about it. Doesn’t everyone you know fit pretty closely into one of these two groups and would probably agree with most of their viewpoint and goals of one or the other of these two new potential parties?

So what do you say? Shall we start a movement to scrap the mostly meaningless titles of Republicans and Democrats and replace them with designations that actually reflect the real-time beliefs of the those that make up our country today? Americana or One-World.

Which would you be?