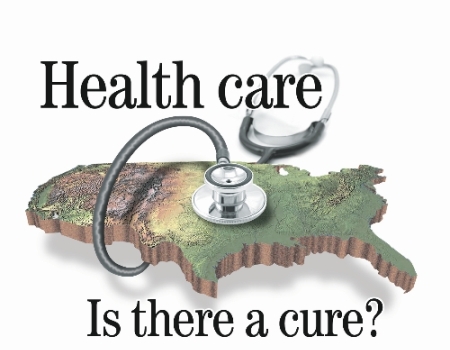 On his radio program  Monday evening, Mark Levin was discussing the ghastly way the Republican Party has treated us regarding the whole healthcare debacle. Mark said, “It’s amazing to me that a man can remain the Majority Leader, McConnell, when the man controlling the Senate, for all intents and purposes, is Chuck Schumer.”
Levin said, “We thought Republicans would repeal ObamaCare – we thought that would be a no-brainer.”
Mark then took some calls. The discussion turned to 'single-payer.' One woman told Levin that she thinks Americans don’t really understand what single-payer truly is. She said that “Joe-six-pack doesn’t know what it means.” Mark disagreed that “Joe six-pack does know what it means, because Joe six-pack has to deal with it too.”
I rarely disagree with Mark, but I have to this time and side with the female caller, who sounded British.
The public doesn’t understand what single-payer truly is. They couldn’t. Just as with many other life experiences, single-payer, top to bottom run government healthcare must be experienced first-hand, apparently, in order for many to discover just how bad it is.
We, who have done our homework, can describe the nightmare of single-payer until we’re blue in the face and it won’t matter a bit to the less informed. And until just recently, we’ve had only second and third hand anecdotes to quote as proof of single-payer failures.
But then came the incident of baby Charlie Gard in Great Britain.
England has become the poster child of the disaster of a single-payer government-run healthcare system. Actually, it’s more of a two-tiered system, where the wealthy and well-connected can go anywhere to obtain high-quality care. The rest are stuck in the government system.
Of course, this is what always occurs in all socialist and communist systems. The leaders of the movement grant themselves special dispensation so as to not have to co-mingle with the riffraff. I don’t mean for it to sound like I’m some sort of populist. I believe in freedom for all – not just for some.
The Charlie Gard case is a systemic problem in all single-payer programs. When a single entity, such as the federal government, controls the system entirely, they also control how funds and justice and life and death are doled out.
In the case of baby Charlie, the system is rigged against him and his parents. Even the family’s government appointed attorney, Victoria Butler-Cole, who is supposed to be fighting for Charlie’s life, is Chairman of an organization that promotes assisted dying. What the Heck!!
So the all-knowing system – doctors, attorneys and courts, have all concluded that the baby, who has a rare genetic disorder - mitochondrial DNA depletion syndrome - one of only 16 to ever have the disease, should “be allowed” to die. Even pressure from a United States President and the Pope has not swayed the British overlords thus far.
The British overlords concluded he should just die because Charlie has “no quality of life” and “no real prospect of any quality of life.” There’s your death panel, folks.
Therefore the hospital will not release the child to the parents to seek experimental care in the United States, despite his parents raising almost $2 million to do so. Any reasonable person would conclude that as long as the government doesn’t have to pick up the tab, then why not?
This would be the conclusion of most who have not studied true socialism and communism – that the single payer system has strictly to do with cost. However, those of us who have studied these other systems understand it has more to with control than money – that money is only one means of control.
We are seeing the tragedy of government-run single payer healthcare being played out in real time for all to see. Unless our wonderful Republican leaders have their heads in the sand, they’re witnessing it also. And still, despite knowing full well what comes next, we can’t repeal ObamaCare.
Copyright ©2017
Read more by Brent Smith
Tweet