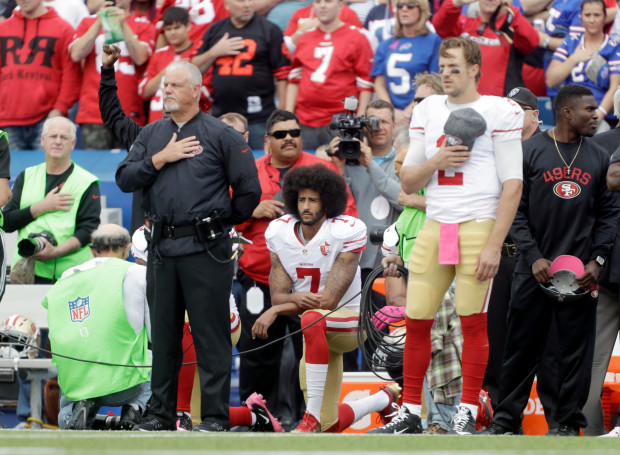 Once again, football season is upon us. Hooray! I can take off my blacking armband, signifying my mourning of the end of last season, as we all gear up for the next.
My New England Patriots reported in yesterday to begin 2017 training camp, as did many other teams, and the Hall of Fame game is now only a week away.
This is time of year when all teams are equal – although some are a lot more equal than others. Every team is undefeated - all the big name free agents have been snapped up, and fans are excited to see what their teams’ new acquisitions are capable of.
However, there is a once-marquee player who is still unemployed. That is, of course, the former star quarterback of the San Francisco 49ers, Colin Kaepernick. The once stud signal-caller who guided his team to the playoffs, and a Superbowl just a few years ago (okay – it was five), has now become pro football’s number one outcast.
But there may be a silver, or rather, a “Black Lives Matter” lining to his dilemma, as “some law professors believe he might have a race discrimination case against the football league should he choose to file one.”
As you may recall, Kaepernick drew a firestorm of criticism when last year he elected to first sit and then take a knee, rather than stand, during the playing of the each pre-game National Anthem.
“I am not going to stand up to show pride in a flag for a country that oppresses black people and people of color,” Kaepernick told NFL Media in an exclusive interview after an August 2016 preseason game. “To me, this is bigger than football and it would be selfish on my part to look the other way. There are bodies in the street and people getting paid leave and getting away with murder.”
Yes, folks – wiser words have never been spoken from an oppressed black man. And speaking of being selfish - what’s selfish is becoming a total distraction to an otherwise good team – putting himself above the team with his buffoonish demonstrations, and contributing nothing while collecting a huge salary. This poor outcast is worth between $22 and $30 million.
According to USC law professor and author of the book “Negrophobia and Reasonable Racism: The Hidden Costs of Being Black in America,” Jody David Armour, Kaepernick has proven that he can play the game at a high level. You “can’t point to the kind of record that he can point to and say that there isn’t something going on here in the way of a message being sent out in some kind of discrimination.”
Huh? I think he means that Colin is somehow being discriminated against. Well, it sure can’t be racial discrimination, considering blacks represent 70% of all NFL players. And 'Negrophobia' – that’s a new one.
Yet according to Susan D. Carle, a professor of law at American University’s Washington College of Law, Kaepernick would have a tough time getting satisfaction. She says that NFL teams, “have the complete right to choose the person they think is going to be best, and they can make that decision based on any reason except an illegal reason. And illegal reasons could include … race discrimination.”
Colin Kaepernick isn’t being signed by a team, not because of race, but because he’s an idiot, and would be a distraction to any team. No team wants to suffer his antics and the wrath of their fans for signing him.
The bottom line is that he went from normal American to radical black activist in no time flat. He did so after he met and began dating his now girlfriend/maybe fiancée, Nessa Diab. His social media posts went overnight, from good guy standard American football fare to angry social justice warrior, including posts of the Black Panthers, Black Lives Matter, Nation of Islam, and Fidel Castro.
For anyone who is still a fan of Kaepernick – don’t blame the NFL for his downfall. He did this all on his own by getting involved with an angry radical, Muslim activist and Black Lives Matter advocate. Good choice Colin. Hope she’s worth it.
Copyright ©2017
Read more by Brent Smith
Tweet