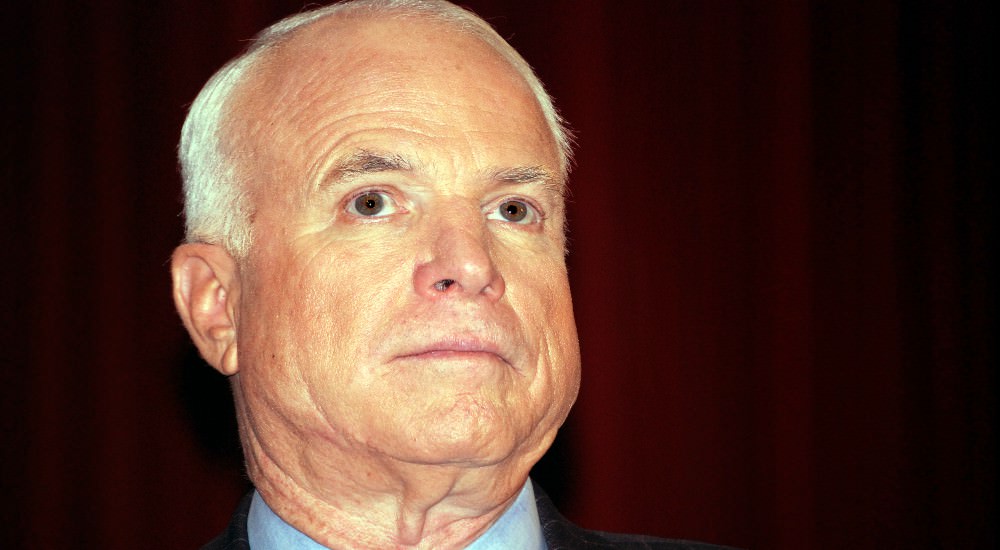 The 80-year-old flew 2,300 miles from Phoenix to Washington for an important procedural vote: simply to begin debate for the GOP's replacement bill for Obamacare (Vice-President Pence broke the 50-50 deadlock with his tie-breaking vote). To a hero's welcome of universal cheers, McCain delivered a feisty 15-minute speech excoriating his colleagues' inaction. He criticized them for their partisan infighting, and for their inability to get constructive things accomplished. If that's so, hasn't this elder statesman been an integral part of that governing body for the last 30 years? Doesn't this former presidential nominee — the Chairman of the Senate Committee on Armed Services — bear some responsibility for Republicans' failure to deliver in 2017?

Speaking of achieving nothing, what was this “maverick's” next move? Utterly oblivious to his own advice, he voted against the “clean” Obamacare repeal. Recall that repeal is the fundamental step to finally kill this costly health care disaster. That must occur regardless of any GOP replacement still in the works. Specifically, doesn't Senator McCain's long-suffering constituency deserve real progress? After all, for them, Obamacare premiums have increased a staggering 116 percent! However, that's not this multimillionaire's problem: as a member of Congress, he's exempted from Obamacare's vagaries. Furthermore, given McCain's own pressing health issues, where's his sympathy for those less well-situated than himself?

For seven years, the GOP has repeatedly promised the American people that they would rip out Obamacare “root and branch” once they gained control of Congress and the White House. Well, prettily perched, there they sit. Six months has elapsed while Congressional Republicans dawdle. Yet, the clock is rapidly ticking to the midterm elections in 2018. On Wednesday, seven betrayed that long-standing pledge, joining all Democrats to defeat a straight repeal bill. For context, with the exception of Susan M. Collins (R-ME), six voted for the 2015 Obamacare repeal that was subsequently vetoed by President Obama.

Unfortunately for Republicans, history has shown how easily disenchanted voters dispense with them when they don't keep their word. A case in point was one-termer George H. W. Bush. Recall his empty one-liner, “Read my lips: no new taxes.” That capitulation cost him reelection. Likewise with healthcare reform, GOP dithering will likely cost them their slim majority in the Senate next year. As Republicans are acting indistinguishably from Democrats — as blatantly demonstrated by John McCain — what good are they?

All is now jeopardized within this contentious political landscape. Still, what's clear is that Republican legislative efforts consistently garner zero support from Democrats. Therefore, how is one supposed to “work across the aisle” — as McCain admonishes — with the obstinate and the intractable? After all, as Democrats jammed Obamacare down the unsuspecting throats of the American people in 2010 — with no Republican support — why shouldn't any replacement follow suit?

For starters, McCain's “wishful thinking” isn't a practical or effective strategy. What would be effective is publicly calling out Democrats: for their party caused this healthcare fiasco. What's worse is their complete abdication of responsibility, and their utter lack of cooperation now. In response, political hardball is required. For a cue, the senator need only look to President Trump's comments from July 18:

“It would be nice to get Democrat support but really they are obstructionists. They have no ideas. They have no thought process. All they want to do is obstruct government and obstruct period. In this case, think of it, so many good things we didn’t get one vote and their plan has failed. And, by the way, Obamacare isn’t failing. It’s failed. Done.”

Liberals' unyielding mind-set is absolutely incongruent with basic American ideals like liberty and self-determination. At least in theory, that's why Republicans value individuals over government. By contrast, progressives expand the state to compel social and political change. Wasn't Obamacare — a government takeover of 1/6 of the economy — precisely that? Given all these facts, why would any Democrat support the GOP's floundering efforts to unshackle health care from its centralized, bureaucratic controls?

One can neither bargain with fate, nor deny what is self-evident. Sorry Senator: advocacy of “compromise” with progressives is a proven non-starter. Another lame tactic — shared by McCain's fellow RINOs — is the self-defeating notion not to vote for repeal until a replacement is fleshed out. What's the point of voting for formal debate — but against meaningful repeal? To that end, McCain put an early morning shiv in the GOP's latest Obamacare repeal known as the stripped-down “skinny” option. Needing 50 votes to advance, it only received 49. Once again, Trump's 2:25 AM Tweet of July 28 says it all:

“3 Republicans [McCain, Collins and Lisa Murkowski (R-AK)] and 48 Democrats let the American people down. As I said from the beginning, let ObamaCare implode, then deal. Watch!”

This veteran of Washington gridlock — and those who follow him — have likely gifted the chamber to Democrats' hands in the next election cycle. Yet, whether that happens or not, they have wounded the American people by blocking every offered healthcare solution. Today, thanks primarily to John McCain, disgusted millions who placed their faith in Congressional Republicans have ample reason to feel blue.