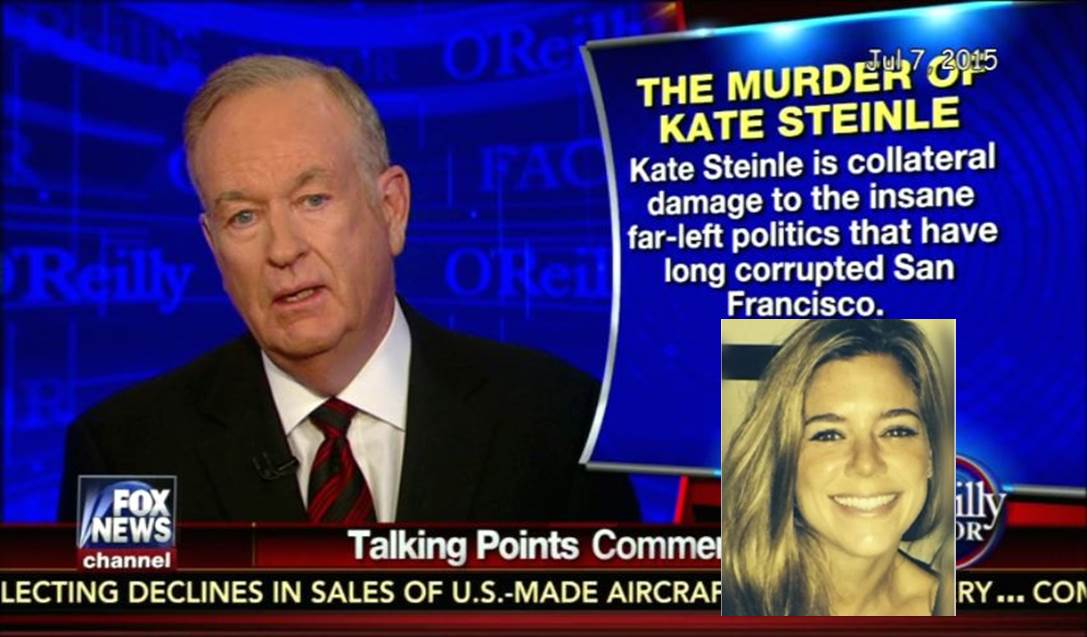 “Sanctuary cities, in my opinion, are un-American. … They're a sanctuary city, they're proud of it.”

Recall, her stomping grounds were made infamous by the July 1, 2015 slaying of 32-year-old Kate Steinle. Walking along Pier 14 with her father, Ms. Steinle was struck in the back by a ricocheting bullet from a stolen gun in the hands of an illegal, Juan Francisco López-Sánchez: a felon with 7 convictions and 5 deportations. López-Sánchez had been in the custody of the San Francisco Sheriff on drug charges when ICE issued a detainer for him. Instead of turning him over as federal law demanded, this convicted criminal was set free—and an innocent lost her life.

Over two years later, things have evolved from the tragic to the farcical.

Today, San Francisco is apparently so “proud” of their ongoing sanctuary status, they're paying Señor Figueroa-Zarceno six figures for not living up to their federal law-violating “principles!” For context, back in December 2015, Figueroa-Zarceno informed police about his stolen vehicle. That caused them to become aware of his DUI conviction and an order for deportation to his home country of El Salvador. Reporting the theft of his vehicle ironically led to his arrest and two month incarceration. Yet, given San Francisco’s sanctuary policies, this outcome was illegal. Per the 1989 “City and County of Refuge” Ordinance (also known as the Sanctuary Ordinance):

“City employees [are prohibited] from using City funds or resources to assist Immigration and Customs Enforcement (ICE) in the enforcement of Federal immigration law.”

Hence, for complying with federal law—that importantly supersedes local statutes—San Francisco obliged itself to pay Figueroa-Zarceno from the taxpayer till. What's more absurd: that this two-faced “victim” claims “what happened to [him] was very unfair and it was an injustice,” or cutting him a large government check for his “inconvenience”? Indeed, this outrageous settlement illustrates the schizophrenic nature of sanctuary policies for law enforcement. Which do they honor? The conflicting city policy or the federal mandate? Siding with the former means releasing often violent offenders or risking similar payouts.

Hypocritical Democrats falsely justify sanctuary cities by advocating the straw man argument of “tolerance and multiculturalism.” In truth, Democrats promote these lawless enclaves—populated by illegals and criminals—precisely because these same illegitimate groups overwhelmingly support them politically! A case in point is California Political Review's “Poll: 13% of Illegal Aliens ADMIT They Vote.” Tellingly, 80% of noncitizens back Democrats. Therefore, progressives shield these lawbreaking foreigners because their political prospects are tied to them.

For this safely ensconced ruling elite, what do they care about perpetuating a dangerous environment? Another Democratic-run urban jungle—like America's murder capital, Chicago—leaps to mind. Former Obama flunky Rahm Emanuel parrots, “We want you to come to Chicago if you believe in the American dream.” What of the unrealized dreams of the 423 fatalities—recorded there in 2017, so far—Mister Mayor? What of this unending nightmare Democrats universally condone, and encourage? Undocumented aliens hide in plain sight while citizens cower from shadowy, un-American threats to life and limb.

This discrepancy is most clearly seen in San Francisco's disbursement of money to “injured” parties. While illegal Figueroa-Zarceno will be quickly paid for his trouble, last January U.S. Magistrate Judge Joseph Spero dismissed the wrongful death suit filed against San Francisco, and then-Sheriff Ross Mirkarimi, by Kate Steinle's family. (The lawsuit against the Bureau of Land Management—the source of the López-Sánchez's stolen firearm from an agent's car—is proceeding.) In essence, city leaders have negated a citizen's constitutional rights, Kate's, while championing the “rights” of a foreign squatter? What an Orwellian result! In the final analysis, which group demonstrates more contempt for America? Liberals who run San Francisco, or illegals who inhabit it?