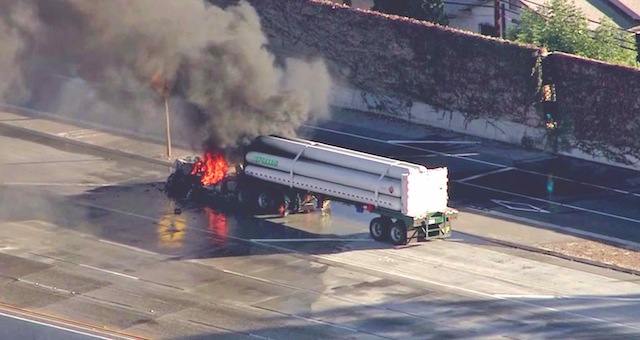 In the Kansas City metro area, there have been a handful of highway accidents involving semis which resulted in fires. Two were particularly notable to locals, including one accident that took the lives of five people. In that latter incident, over an hour elapsed before emergency responders realized that an additional car was involved. The intense fire made the scene look like something out of Mad Max.

Generally speaking, truck drivers are the safest people on the highways. They drive 100,000 miles a year or more – sometimes much more. While there are exceptions, of course, including truckers who drive too many hours in a day, the folks who drive their 18 wheels down America’s roads stay between the ditches quite nicely. When they find themselves in accidents, it’s usually because of acts of those driving cars.

Cell phones have hurt trucker safety, but that is true for all drivers.

The concern these days is when semis do crash. Due to their size, perhaps tractor-trailer crashes have always been a concern, but that concern is greater now. It takes Government to make a situation either bad or worse. Leave it to the environmentalists to make life worse for people. The genesis of fiery truck crashes can be traced back to that trend-setting state:  California.

In 2009, a California environmental rule change went into effect. This rule mandated filters for truck engines which are better for the environment. When the data was questioned and the credentials of the man who accumulated the information were brought to light, the environmentalists dug in their heels. Why let little things like facts get in the way of a grand opportunity to look like the environment is being helped?

Assume, for a moment, that environmentalist claims are correct:  that these filters, which have been in use for eight years, really do cut big rig emissions by 98%. The question becomes:  At what cost? Would it be acceptable to cut airliner emissions by an equal amount if the odds of plummeting to the Earth increased?

Specifically, all engines built after 2009 and that operate in California must include a filter, known as a diesel particulate filter (DPF), in order to operate within the state’s boundaries. These filters cost approximately $20,000 each. For small business owners and independent operators, this amount is crippling. Imagine owning a business which revolves around your 10 big rigs. Imagine being that independent operator who has to have the filter for those instances when a contract is picked up to haul a load out of the Golden State. The only good news is that the filters are one-time costs - not counting the extra maintenance needed for the engine, of course. The engine gets less air, which is harmful to the coolant system, which is harmful to the lubricant system, which leads to additional engine maintenance. This is another financial stab through the wallets of owner-operators and small businesses.

Maybe if our air quality was that of East Germany, circa 1986, or present-day China, this extremist approach would be acceptable; but this is neither East Germany nor Communist China. California’s air is not nearly that bad. The free market and minimal government regulations keep the air and water clean, yet bureaucrats persist in pushing for more and more extreme remedies to minor problems.

California officials have had the attitude for the past few decades that they are more committed than the feds. They take federal rules and regulations and make theirs more stringent. It’s a matter of misplaced pride for California leaders – one that is lustily pursued by bureaucrats.

Most environmental regulations impact the economy negatively, but every once in a while, truly noxious regulations come along which cost lives. A traffic accident involving a tractor-trailer is bad enough, but to survive a collision only to be burned to death is an event that only government bureaucrats can label as acceptable.

The California Air Resources Board remains insistent that the filters are safe, despite voluminous examples to the contrary. The bureaucrats are adamant. In their defense, the percentage of incidents remains low; however, the percentage of big rig accidents in relation to the number of trucks on the road remains low.

Evidence includes a 2011 Washington fire, which burned 3,600 acres and 29 homes. The fire, which burned for 12 days, was started by sparks from a diesel particulate filter on a truck as the vehicle drove down the highway. An Internet search of tractor-trailer fires reveals numerous incidents such as the deadly incident referenced above.

What makes the DPF so dangerous? The filter heats up to 1,400 degrees. Even a minor accident can cause enough damage to lead to diesel fuel spilling onto the filter. As one trucking industry spokesman put it, such a minor accident turns the truck into a “blowtorch.”

Engines built after 2009 come with the DPF as standard; before that era, they must be installed by 2023 in order for the truck to be operated in California. When considering the population of the state and the fact that the coastal state has major ports, operating in the Golden State is imperative for many trucking firms.

For the filter to work, sufficient heat needs to build up, essentially allowing the filter to self-clean. Fire trucks do not build up the requisite heat that over-the-road semis do, so special cleaning processes are needed to avoid disabling the fire trucks. Extra costs for fire departments equals extra costs for taxpayers.

The lesson for all of us is two-fold:  1) When environmental regulations are proposed or take effect, beware of the consequences. Human life is usually the recipient of unintended consequences. 2) Don’t cut off a big rig or otherwise cause them to wreck. You might not live to tell the tale, thanks to an environmentalist bureaucrat.