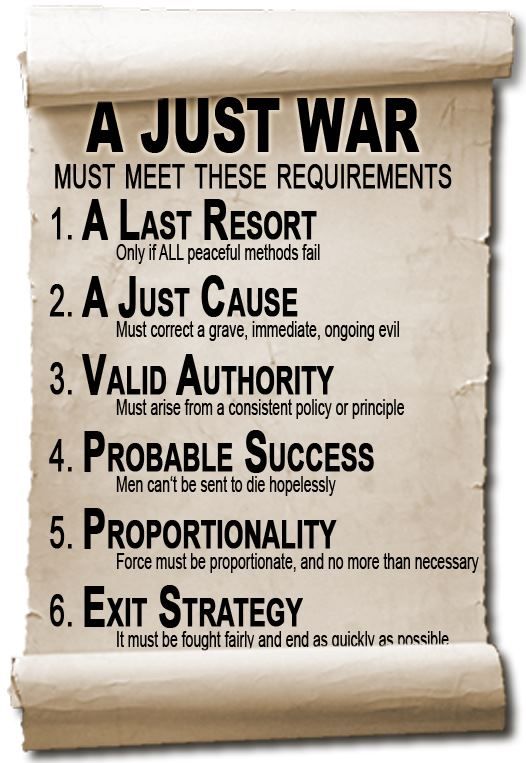 President Trump climbed out on a limb and handed his enemies a saw when he announced to the world that additional threats from the North Korean dictator would result in “fire and fury.” He seemed to say that he would face down the schoolyard bully (Kim Jong Un) and knock the chip off his shoulder. However, it is not a “chip” but a nuclear warhead!

America is closer to nuclear war than any time since the Cuba missile crisis in 1962. We are told by some (after they stop beating their war drums and wiping the Kool Aid from their lips) that it is time for Trump to send the North Korea dictator into eternity. Of course, if that happens, a few million others will go with him. Even some Fundamentalists are beating the drums for war! There is a time for war but it must be a just war–not for land, not for power, not to divert attention from economic problems, not to display manhood, not to save face, etc.

Roman pagan Cicero introduced the principle of a “just war.” Such a war must be for the honor and safety of the nation; the war is pursued only after negotiations have failed; a declaration of war must be given to the enemy; the purpose must not be for conquest or land but for producing a just peace; prisoners and those who surrender must be protected; citizens should be protected if possible. (De Republica iii.22-29; De Officiis i. 11-12.) Not bad for a pagan.

The first war in history took place in Mesopotamia (modern Iraq) in 2700 B.C. between Sumer (in modern Iraq) and Elam (in modern Iran). The Sumerians, under command of the King of Kish, Enembaragesi, defeated the Elamites in this war and it is recorded they “carried away as spoils the weapons of Elam.”

The details of the first recorded war were written on a stone monument erected by Eannatum who was ruler of Lagash (city-state in Iraq) commemorating his victory over the ruler of Umma (city-state in Iraq) in 2525 B.C. It depicts birds feeding on the remains of the dead soldiers. Alas, such a depiction tells the story of all wars.

Christians and Western Civilization should base their warfare on biblical principles beginning with Abraham. He and Lot had moved from Ur (Iraq) and ended up in Canaan, a territory of city-states, petty princes, notorious nomads, and rough rebels. Abraham and Lot became wealthy in the currency of the day–herds of cattle, goats, asses, camels, etc. Then Lot split off from Abraham and moved to Sodom.

Genesis 14 reveals the first recorded war in the Bible in about 1925 B.C. Chedorlaomer had subdued and conquered the kings of Sodom, Gomorrah, Admah, Zeboiim, and Zoar all located on the plains of Jordan and made them pay tribute for 12 years. The five kings rebelled against paying this tribute and Chedorlaomer led a coalition of four kings, including the kings of Chaldea and Persia (minor powers at that time) to collect his tribute and teach the rebels a lesson. Since Lot lived in Sodom, he and his family and their goods were taken captive; Lot’s Uncle Abraham pursued the kings and chased them to Damascus where he rescued the whole group.

Abraham formed a coalition of his neighboring chieftains along with his 318 servants and went after the four kings to rescue Lot and family–and their goods. He was motived by altruism not by avarice or ambition or anger, but to rescue the innocent. Although Abraham was a man of peace, he had trained his small army in military tactics. The army he was pursuing was vicious, victorious, and not a vanquished army, so Abraham and his coalition were vulnerable. But righteous people are bold as a lion because their hearts and motives are pure. After the successful battle, Abraham refused to take a reward from the King of Sodom; he only wanted his family and their goods returned.

Abraham waged a righteous war demonstrating the conditions of a just war. Canaan was not an organized nation with laws, officials, boundaries, etc. The walled city of Jericho had about 2,000 inhabitants following an agricultural lifestyle as far back as 7,000 B.C. (although I think that is exaggerated).

Many in the U.S. are always ready for war, usually the old dudes who only get as close to danger as a cannon at a Washington monument. They send the young to prosecute the war–as is true in Iraq, Syria, Afghanistan, etc. Then there are others who never think it is necessary to take military action. They demand we beat our swords into plowshares while the descendants of Mau, Marx, and Mohammed decide to conquer, kill, or subjugate us.

We are the most powerful nation on earth and more so than any time in history; but having the weapons does not guarantee we have the wisdom. Reasonable people of all persuasions hope (and pray) that President Trump will use wisdom to avoid the use of weapons on the North Koreans. Our principles should preclude the use of weapons when possible.

It would be wise to consider the words of Alexander Solzhenitsyn who opined that the next war may well bury Western civilization forever. We have dumped trillions of dollars in the Middle East and have little to show for it except little white tombstones in Arlington Cemetery. The final bill for our wars in the Middle East will run at least $3.7 trillion and could reach as high as $4.4 trillion, according to the research project “Costs of War” by Brown University’s Watson Institute for International Studies.

In light of the high cost in lives and dollars, I suggest President Trump hesitate before pulling the trigger. In this situation, it is wiser to go a little too slow than to go too fast. Haste makes waste as any war photos will prove. Yes, the fat boy in North Korea and the fanatics in Iran have nuclear weapons and are willing to use them. But let’s not be too hasty to get out the war paint.

The reason for going to war with North Korea is the safety of U.S. citizens. When wise heads decide that we are in imminent danger then U.S. officials should collect and coalesce a coalition to confront the little toad in Pyongyang. If North Korea were contiguous with the U.S. as is Mexico then we could go it alone but not with this geography. Even China, and for sure Japan and South Korea would see the wisdom in joining us.

Then demands should be made by the coalition that would eliminate the threat permanently. If our demands are rejected, then let loose the dogs of war. Of course, that doesn’t have to be nuclear weapons. The object is to protect America, not to kill everyone.

Our officials must also look beyond the victory; we don’t want to occupy North Korea for fifty years. Nor do we want to rebuild their cities. We only want protection for our people.