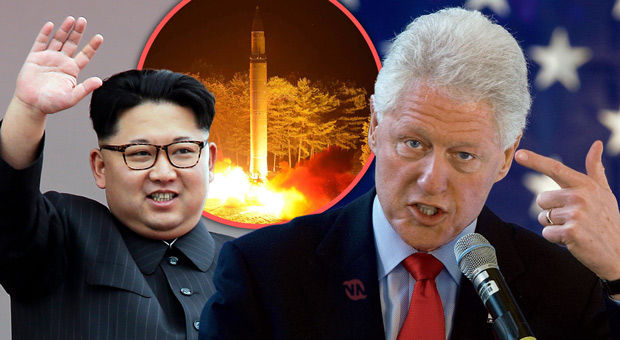 In nature, typical human beings are smart enough not to feed the gators. Wisely, neither do they tangle with grizzly bears. Historically, why then do Democratic presidents consistently subsidize, and embolden, America's geopolitical foes? A prime example is Bill Clinton's public capitulation to one back on October 18, 1994:

“This agreement [$4 billion in U.S. energy aid] will help achieve a longstanding and vital American objective—an end to the threat of nuclear proliferation on the Korean Peninsula.”

In light of the present reality there: whoops!

Recall that this poll-obsessed president—same as the last occupant of the White House—mastered the promotion of superficial political narratives - the optics of how something can be politically spun: without any thought to how dire something actually is, or may turn out in the long term to be. Facilitated by Bill Clinton, what greater example could there be than North Korea? Today, a totalitarian regime has him to thank for reportedly passing the nuclear threshold.

Beyond any consideration, Democrats are always about preserving their party's influence via the next election cycle. Back then, in the middle of his first term, Mr. Clinton badly needed a talking point. An illusory “victory” he could point to to stave off what shortly became 1994's Republican Revolution: a GOP takeover of both chambers of Congress for the first time in 40 years. Yet, at the time, Clinton's machinations were even acknowledged by the partisan New York Times:


“The accord struck in Geneva gave the President a chance to proclaim a major foreign policy success just weeks before the midterm election. But Asian diplomats pointed out today that it also placed the United States in the odd position of bolstering the political capital of a man it has regularly denounced as a terrorist, a supplier of missile technology to Iran and a dictator: Kim Jong Il.”

In retrospect, Kim Jong Il (Kim Jong-un's father) had Bill Clinton's yellow cake and ate it too. Naturally, by cake, I refer to the de facto U.S. financing of North Korea fledgling nuclear weapons program. Over the decade that U.S. billions flowed to Pyongyang, isn't it likely that some of that American cash was misappropriated to acquire uranium, and develop military technology like ballistic missiles?

As the Clinton administration had declared Kim Jong-un's father a terrorist, why would they foolhardily enter into an agreement with someone obviously so dangerous and untrustworthy? Remember, the former Arkansas governor had no international experience. His shortsighted political “fix” garnered some momentary positive press, but achieved nothing meaningful. In the House of Representatives, a 54-seat swing put Republicans in charge for the first time since 1952. Likewise, an 8-seat gain gave the GOP control of the Senate held previously in 1986. As is so typical in modern-day politics, problems escalate by being kicked farther down the road to someone else, and an uncertain future.

Then, as now, Republicans hold the reins of power in Congress and the White House. Given the contentious political landscape—and disturbing international developments—a mixed blessing, at best. What it really means is that the GOP—and Donald Trump, in particular—is left holding the bag for decades of liberals' reckless policy decisions. Idiotic choices exemplified by thoughtless neophytes like Bill Clinton in the 90s, and repeated by Barack Obama during his administration. Besides Obama's coddling North Korea for eight years, what of his adding almost 10 trillion added to the nation's debt; ISIS's full flowering under his watch; the healthcare debacle that is Obamacare; and the yet-to-be realized Damocles sword that's his disastrous Iranian “deal”. Wrongly maligned by the beltway establishments of both parties, how “lucky” for Mr. Trump to also potentially contend with an upcoming nuclear threat from Middle Eastern Ayatollahs!

In essence, isn't Bill Clinton's North Korea misadventure equivalent to Barack Obama's Iran? Once again, the pretext of a “Democratic victory lap” on the international stage was the unhinged rationale for misappropriating American resources to bankroll the largest state-sponsor of terrorism: $33.6 billion! As the clock rapidly expires, does any clear thinking person truly believe that Iranian leaders are not actively following North Korea's lead?

To that end, in the modern era, Democratic presidents tend to drag America into armed conflicts (or as close to them as possible). As examples, there's no doubt that Democrats were in the White House during the three big “defensive” wars of the 20th century: the two World Wars and Korea. Furthermore, Democrats started and escalated the widely unpopular Vietnam War. In Asia, so much American blood and treasure needlessly lost! If history repeats itself there, his Democratic predecessors, not Trump, overwhelmingly bear responsibility.

In the interest of full disclosure, there are two notable exceptions where contemporary Republican presidents have initiated war. First, was Bill Clinton's minor inheritance of the military intervention in Somalia ordered by George H. W. Bush. Second, and of far greater significance, was Mr. Obama's inheritance of the Iraq War from George W. Bush. Yet, an important mitigating factor shows, once again, that a Democrat's hands are central to triggering that American tragedy. This time it was Bill Clinton's choice not to act against Osama bin Laden—the mastermind of the 9/11 attack—that enabled the deadly domino effect. As Sen. Marco Rubio (R-FL) articulated in the GOP debate on February 13, 2016:


“The World Trade Center came down because Bill Clinton didn’t kill Osama bin Laden when he had the chance to kill him [four chances per the 9/11 report].”

For all of the above, if not for failed Democratic presidents would Mr. Trump be in such an unenviable position overseas? Thus, his fiery rhetoric of “fire and fury” is singularly appropriate under these circumstances. For insight into the president's mentality, his 1990 book, “Trump: Surviving at the Top,” states:


“Americans have become so accustomed to professional politicians that when they are faced with a strong personality—a man or woman of action—they are afraid, or at least very wary…When we fear leaders of great passion, though, we often forget that the other side fears them, too.”

Such a mind-set undoubtedly scares anti-Trump pundits populating the MSM media, but it sends an unmistakable, Reaganesque message of strength and resolve. Trouble-making North Korea—and other anti-American despots—would be wise to listen. For real change has arrived: this time a pro-America grizzly is being provoked. Regardless of the outcome, that will make all of the difference. No longer does a wishy-washy Clinton, or a progressive apologist, occupy the Oval Office.