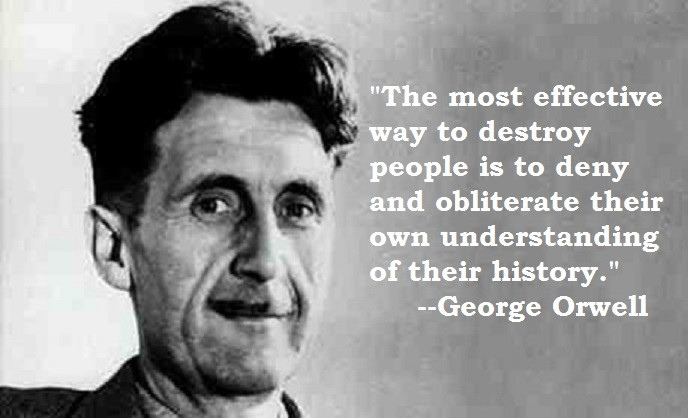 Erasing history has certainly never been the mark of an open and free society.
Have we become like ISIS and simply want to destroy everything that offends us?
Since the latest kerfuffle over statues and monuments, organized and funded by the DNC/Media cabal, I’ve been polling a sampling of opinions on FaceBook concerning exactly ‘who’ should make the decisions concerning which monuments are deemed unfit or politically incorrect and must be consigned to the “dustbin of history." The results have not been encouraging.
As usual, it appears that shrill and strident voices on the left are the most vocal in demanding that everything that offends them is eliminated. As for the majority of people, sadly, most have been so cowed by being called ignorant or bigots, that they are either content or intimidated to let the loudest and most intolerant voices among us bully the rest into allowing the radical left to dictate the re-writing of history in the United States.
Every time this has happened throughout history it has turned out badly. Every time, and very badly.
Examples abound in the 20th Century, beginning with the Russian Revolution and the Bolshevik takeover when Stalin starved, murdered, and enslaved millions of his own people. He also presided over the continual rewriting of history - not only Russia's but the rest of the world as well. To the point in fact, that when the Berlin Wall fell, the Russians asked for western textbooks because they had rewritten history so often that they no longer had any idea of what was true and what was not. Sound familiar? Check out today's college campuses.
Next up were the Nazi’s. They perfected book burning as a way to erase ideas they didn’t like…such as freedom of speech and religion. And not only did they murder 6 million Jews, but also millions of political prisoners, including many of their own countrymen for daring to speak the truth about the destruction of freedom. Again - sound familiar? Turn on the nightly news and you will see the same concept not only being reported, but actually praised and propagated by the Left-Wing Media.
As another assault on truth and democracy, the second half of the last century produced the bloody, rabid 'Cultural Revolution’ of the murderous Chairman Mao, in which he convinced millions of students to kill their non-communist teachers and denounce their parents for not adhering to the tenants of the 'new order.' Once again - sound familiar?
That was followed by a host of dogmatic, brutal dictators and fanatics such as Pol Pot and the Khmer Rouge, the Castro brothers in Cuba, the Iranian Revolution and most recently ISIS. If you take a look at the Antifa movement with their black uniforms and masks, and watch as they burn and destroy all that doesn’t fit within their own narrow philosophy, what does that remind you of? Those pictures of ISIS destroying priceless artwork, artifacts, and symbols of the past? Is that perhaps a preview of what is beginning to happen here? Chilling.
So, what are we to do?

The founders of the country, whom the left so violently despise - and perhaps this is why - foresaw that there might come a time when the tyranny of a regime or a mob, might imperil the liberty of the citizens. That’s why, when they drafted the amendments to the Constitution, they made freedom of speech and assembly the first one. It was that important.

Make no mistake, the Left knows that too. Like all rigid and intolerant movements, that’s why they know they can’t take over until they have eliminated that all-important freedom. Hence the current movement to limit, or ultimately ban, free speech altogether. Everywhere.

They’ve already succeeded on college campuses, but don’t think they will stop there. Their plan is to continue until their PC rules of accepted speech - which change daily - are mandatory everywhere. Remember George Orwell? In his infamous "Ministry of Truth," the slogan was: “War is Peace. Freedom is Slavery. Ignorance is Strength.” They rewrote history every day and monitored the populace through the omnipresent, and mandatory, state-controlled TV sets.
That is already here. Have you seen all the stories of the gadgets like 'Alexa' that are monitoring everything you say, 24/7? Not to sound too paranoid, but suppose everything you said was being sent back to a Facebook or Amazon team to see if you had uttered any ‘hate or politically incorrect' speech. Could you expect a knock on the door and a trip to the ‘re-education camp?’ It’s happened before. In fact millions of times over the past 100 years.
So what can we do, as thinking conservatives and firm believers in the Constitution and its principles, in the face of the rise of the new cultural book burners?

Keep believing that truth is better than ignorance and continue to keep in mind the words of Thomas Charlton who warned in 1809 that, "The price of liberty is eternal vigilance.”
I have a feeling we’re going to need it.
Copyright ©2017
Read more by Ric Wasley
Tweet