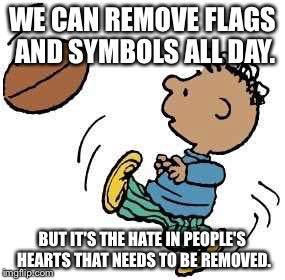 Last week’s “Free Speech” rally in Boston was widely portrayed in the media as “peaceful." I guess that means that throwing rocks and bottles of urine at police now qualifies as non-violence. The event was widely billed as an epic battle pitting fascist neo-Nazis and KKK against a coalition of good-hearted citizens called “Antifa.” Free speech is something that must have been a cherished right in Nazi Germany; I say this because it seemed to be hated so much by the “anti-Nazi” counter-protesters.

I guess that The “Antifa-da”, 15,000 strong, overcame all odds to defeat the 50 or so Free Speechers, which didn’t actually include any Nazis or KKK. It did include one elderly lady, however, who was righteously and non-violently knocked to the ground and relieved of the American flag she brandished to outrage, um, other Americans.

Besides stifling free speech, the latest cause celebre’ for the massive Leftist protests is the removal of statues and other monuments of the Confederate States of America (CSA). History books are said to be written by the winners. Now history is being erased.

The CSA and its generals fought, directly or indirectly, for a cause that was terrible then, and is terrible now: slavery. The issues for the common soldiers, not rich enough to own slaves, were simpler: an invading army was occupying their farms, butchering their animals, and eating their crops.

So they marched into enemy fire, fell by the thousands, and died, often in agony and not very quickly. So did their opponents, Union soldiers whose statues, at least for now, aren’t in jeopardy. North and South were on opposite sides, but the common beliefs at the time regarding race, sex, and many other issues were not very different on either side of the Mason-Dixon Line.

Ideas regarding the owning of other human beings were different in the South, certainly, but not universally. General Lee, the target of much of the current controversy didn’t much care for slavery and wrote as much: “Slavery as an institution, is a moral and political evil in any country.” He did own slaves, although he freed the ones he owned (inherited by him, not purchased) in 1862, before the Civil War went south, so to speak, for the Confederates.

But attitudes about whether blacks were equal to whites weren’t much different among the general population, South or North. Feelings about Native-Americans were no better. Attitudes towards women were equally negative; women didn’t even receive the right to vote until decades after African-American men. These were abhorrent but not aberrant viewpoints. To one extent or another, everyone believed that inequality based on race, sex, even religion, was the state of things. Robert E. Lee thought so, but so did Abraham Lincoln.

Which takes us to today, a time when people are judged, not by the times in which they lived, but by the dystopian vision of the modern Left. Of course, this only applies to whoever are the designated victims of the day. So the monuments to Confederate generals and the hundreds of thousands of rank and file are desecrated daily, and those memorialized are judged inadequate compared to the enlightenment of today’s Millennial.

It’s a battle that dead Confederates won’t win. The Left can’t pick a weaker opponent than someone who died 150 years ago. Judged against today’s values, opinions from the 19th Century are often hard to understand and harder to defend. The problem is that the viewpoints of those represented in Confederate memorials aren’t much different than people like Thomas Jefferson and George Washington, both slave owners. If we judge founding fathers or, really, anyone of bygone eras by today’s values, could any survive the scrutiny?

Take me. I’m an old retired obstetrician, and if you judged me by the era I practiced in when I was young (Jimmy Carter was President), you’d be shocked. Severely premature babies were considered unsalvageable. Now, advances in medical care allow most of these infants to survive.

Thus, compared to today’s obstetricians, a young 1970’s intern like myself would be considered a witch doctor. In forty years, the physicians of 2017 will be considered witch doctors. That’s how much technology changes things. Attitudes change, also. Even my very existence as a male obstetrician seems like a quaint anachronism; fancy that, a man who thinks he can treat women’s medical issues. Don’t see many of them on TV these days.

But don’t judge me by today’s standards. As a medical student, I wanted to be the kind of doctor that was more often associated with happy events than sad ones. I didn’t think I was being sexist by presuming that, as a male, I might be a reasonably good healthcare provider to a woman.

I’m a product of my times. Lee and Lincoln were products of theirs. How about you? Do you think it would be fair to be judged based on what the morality, politics, and values will be 150 years from now?

Lee once wrote that, for the good of the newly reunited nation, it was wiser not to erect statues and monuments to the Confederate States of America. Hence, I guess he wouldn’t mind too much if his are removed to some museum, Civil War battlefield, or melted down to make components of cell phones or electric cars.

If we continue to judge historical figures by today’s values, however, they will always fall short. By condemning them to history’s dustbin, we won’t learn from their mistakes and successes. We’ve already forgotten what Lincoln once said: “A house divided cannot stand.” The last time we were this divided, there were tragic consequences. Will this nation stand if we whitewash our history?