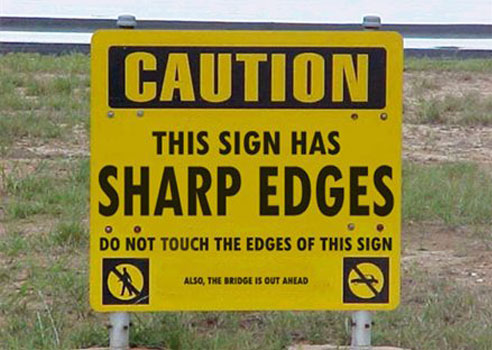 I know this is an uncharitable thing to say, but sometimes it is hard to believe just how stupid people can be.
It’s why we have so many warning labels on our products. I guess to be more accurate, the warning labels are the result of our litigious society, where stupid people can sue others just because they are stupid.
At my day job, we have these 5 gallon plastic containers with sealable lids we use from time to time. On the container reads a warning – “do not place small children inside.”
Now why would they feel a need to go to the added expense of this? You got it. Because some moron placed their small child in one and something tragic most likely occurred. They subsequently sued the manufacturer, probably won a settlement, further burdening the company.
Yet even warning labels, which take up more space on a product than everything else combined, cannot prevent the dumb from being dumb.
We all might recall the recent grand solar eclipse event. It was the talk of the nation, which was nice for a change. I think the pro-communist thugs may have even laid down their sledgehammers and explosives, taking a break from destroying statues, to look skyward.
As an aside, and completely off topic – I stated during my last podcast that I think it will take a common enemy to unite this nation at this time. Yet this one celestial event, which took only several hours, united us, if only for a short time. It was not a common enemy, but a common interest that distracted us all.
Anyhow – what does the eclipse, sunscreen, warning labels and stupidity have in common? Nothing normally, unless you happened to be working at Prestige Urgent Care in Redding California. Nurse practitioner, Trish Patterson, described to a local TV station what one of her colleagues told her.
After the eclipse, “One of my colleagues at moonlight here stated yesterday that they had patients presenting at their clinic that put sunscreen on their eyeballs, and presented that they were having pain and they were referred to an ophthalmologist,” Patterson said.
These geniuses evidently found themselves without eclipse glasses or other protection, so they instead put sunscreen on their eyeballs. Yes – that’s right. They placed sunscreen directly on their eyeballs.
Seeing this, I walked to a closet, pulled out some sunscreen and read the label. Sure enough, on the back read, “When using this product keep out of eyes.” There it was – plain as day. But honestly – even without a warning label, who would think this would be okay? Answer: a stupid person.
I am reminded of a story Rush Limbaugh often regales his listeners with. It’s about a woman in Port St. Lucy, Florida, who called 911 after being told that the McDonalds she was at ran out of Chicken McNuggets. What did she think the police could or would do?
Now this is America – home of free…and as such, we are free to be as dumb as we wish. However, every so often, don’t you wish we had something like a national basic competency test? It would state that if you are unable to pass this simple test demonstrating even the slightest measure of common sense, you must be deported.

[Editor's Note: Or at the very least the incompetent should be kept from voting!]