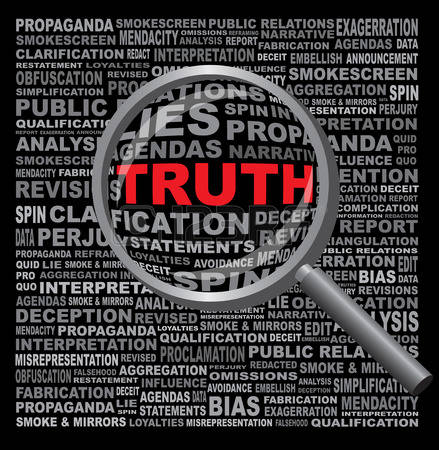 With exceptions, the United States has a dishonest national press. They act as individual reporters and outlets, yet they adopt each other’s narrative. They report partial information, leaving out facts which go against their own narrative. Soon, their narrative become “truth.” It’s 1984 “Newspeak.” What actually happened is forgotten in favor of the official media narrative. Out of frustration, I rewrote the beginnings of several news stories as they should have been written, just before the official media narrative fully takes over the minds of our citizens.

President Trump’s Initial Charlottesville remarks
“With remarks that some said did not go far enough, President Donald Trump condemned both sides in Charlottesville, Virginia, who participated in violence, which began when both white supremacists and average citizens protested the proposed removal of a General Robert E. Lee statue.

“A hodge-podge of Neo-Nazis, white nationalists, and other racist organizations converged on the Virginia city, as well as many citizens upset over the perceived attack on their heritage. The memory of General Lee, who reluctantly sided with the Confederacy because of his love for Virginia, has been caught up in controversy as some people - primarily those on the political left - want to remove tributes to those who fought for the Confederacy.

“We condemn in the strongest possible terms this egregious display of hatred, bigotry, and violence - on many sides,” President Trump declared. He went on to say, “No citizen should ever fear for their safety and security in our society...” and “we (Virginia governor Terry McAuliffe) agreed that the hate and the division must stop - and must stop right now.” The President urged unity when he said, “We have to come together as Americans with love for our nation...and true affection for each other...no matter our color, creed, religion, or political party, we are all Americans first.” He appealed to higher American ideals when he said, “We must love each other, respect each other, and cherish our history and our future together...We have to respect each other.”

“Some politicians complained that the statements did not go far enough in repudiating white nationalism, and that the anarcho-communist organization “Antifa” should not be held equally accountable for their violent actions.”

Free speech in Frisco
“The 1960s generation referred to Berkeley and San Francisco as the location of the “birth of the Free Speech movement.” Nowadays, these same cities are fighting to keep out certain viewpoints in the name of security and “love.” Patriot Prayer, a tiny free speech group headed by an American of Japanese descent, has been called a “white supremacist group” by liberal Bay Area leaders, including former House Speaker Nancy Pelosi and current San Francisco mayor Ed Lee. Despite the diversity of Patriot Prayer’s limited membership, the group’s public denunciation of white supremacy, and a lack of evidence of support for white supremacy or violence, the city of San Francisco took actions which made the group’s free speech permit useless.

“Mayor Lee had lobbied the National Park Service to reject a permit for Patriot Prayer, but the federal government acknowledged the group’s constitutional rights...”

Despite Devastation, Amazing Drought of Strong Hurricanes is Over
“An historic 12-year drought is over thanks to the arrival of Hurricane Harvey. While the hurricane has dropped unprecedented amounts of rain after stalling along the Texas coast, the drought has served as a humbling reminder to “climate change” advocates that either the number of hurricanes does not figure into the climate change equation or, as thousands of scientists have claimed to little avail, the 'science' of man-made global warming is not really settled. The streak that CBS News, in a moment of advocacy, called a “stroke of luck” just two years ago has come to an end.

“While Texans recover from the devastation, scientists will examine the impact and circumstances of Harvey. On-air media personalities and climate activists have attributed Hurricane Harvey and tropical humidity to global warming, but atmospheric physicist Richard Lindzen told the Wall Street Journal, “The problem with this is that the ability of evaporation to drive tropical storms relies not only on temperature but humidity as well, and calls for drier, less humid air. Claims for starkly higher temperatures are based upon there being more humidity, not less — hardly a case for more storminess with global warming.”

“Consistent with what Lindzen has argued, if global warming exists, then we should not see such a drought...”

Violent Communists on the Loose
“In an alarming trend that accelerated after the August 12, 2017, violence in Charlottesville, Virginia, Confederate statues have been destroyed and gravesites have been desecrated around the country. Left wing activists, particularly the self-described “anarcho-communist” organization “Antifa,” which is short for “anti-fascist,” has met violent and peaceful protesters alike with baseball bats, boards with nails sticking out, and sundry other weapons. “Antifa” is an organization that dates back to the days of street fighting in Germany before the Nazi regime gained a firm hold on the government. Preferring Stalin’s totalitarian methods to Hitler’s totalitarianism, the Antifa of the 1930s was eventually wiped out by the rise of the Nazis.

“Currently, Antifa enjoys the approval of politicians and news personalities by way of silent approval in some cases, outright praise in other instances. When former Speaker of the House Nancy Pelosi recently criticized the group’s violent methods, political observers were surprised and wonder whether a sea change will occur against the communists...”

In the first instance, had the national press resisted the urge to lie and exaggerate, consider it likely that many politicians would not have folded to pressure and criticized the president for condemning all political violence and preaching the coming together of all Americans. Instead, pols rushed to find TV cameras. From House Speaker Paul Ryan to lesser known representatives such as Kevin Yoder of Kansas, they rushed to genuflect to the wishes of the dishonest national press and to make themselves appear to be shallow, easily-led puppets.

In the Bay Area, the fight against free speech has been nothing short of stupefying. In brief, conservatives need not apply. If you dare, you will be labeled a “white supremacist.” If you are a liberal, your hatred and violence will be labeled as “love” and “tolerance.”

The matter of Anthropogenic Global Warming-turned-Climate Change is too predictable to address. If a dolphin dies near the beach in Tahiti, somebody will make a documentary about it.

Antifa is violent, dangerous, and vicious. They use methods to injure people for life, in some cases, and they are loosely structured so that their leadership cannot be held responsible. There is also evidence that billionaire radical and America-hater George Soros is behind the organization. While that evidence is circumstantial - Antifa protesters videotaped themselves chanting “George Soros, where’s our money?” - recall that there was also evidence that the billionaire funded riots in Ferguson, Missouri, and we know he funds other radical left wing organizations.

In all of the cases I chose, honest reporting would have shaped public opinion differently - which is the point of the media’s narrative. Combine a dishonest national press with a dysfunctional educational system, and the peril for the Republic is obvious. Simple lack of knowledge has resulted in ill-informed opinions and has contributed to thugs rioting in the streets, unaware of history. Putting the Republic in peril is what many of these people desire.