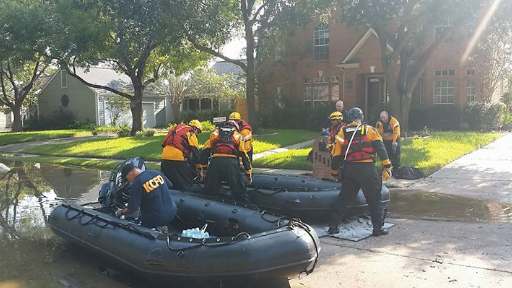 Last week I saw a small piece in the newspaper about a distant tropical depression. I remember thinking, “Could this be our hurricane?” It turned out to be Harvey, the worst storm that has affected Houston in hundreds of years. Harvey devastated Houston, my home for forty-five years.

I built my home in 1980 in the subdivision nearest to the Barker Reservoir. This reservoir empties into Buffalo Bayou several hundred yards below my home. This location turned out to be one of the places most affected by Harvey. Buffalo Bayou carries water both from runoff and from releases of water into it from both the Barker Reservoir and the adjacent Addicks Reservoir. Both were designed and built in the 1930's to protect downtown Houston from flooding.

These dams worked well for eighty years.They were designed so that when the water levels in them become dangerously high, the excess water goes around the ends of the dam and floods the surrounding areas. That happened this week. Many neighborhoods adjoining the reservoirs and Buffalo Bayou were flooded, including mine.

I measured the rising water creeping up the hill toward my home hour by hour for days. Remarkably the rise per hour was almost always one inch, A few times it was one and a half or two inches, and during the nighttime hours it did not rise at all. I presumed that this was done to take pressure off first responders at night, due to the increased danger of working without light.

When I begin measuring, the water creeping toward my home was four feet below my floor. It continued to creep toward it over several days, but by mid-afternoon it began to rise at four inches per hour, rapidly closing our ability to exit the subdivision. Almost all my neighbors evacuated. I stayed outside the subdivision, slept in my car, and monitored the rise throughout the night. At midnight the rise of the water stopped. It was a happy moment.

I dodged a bullet. Water rose to the top of my curb, still 20" below my floor. But sadly other homes in my neighborhood were flooded with five feet of water.

People came from all over to help. Firefighters from Kansas came, and came prepared. They brought two airboats, three rubber rafts, a huge technical trailer, an ambulance, and a very professional command and support staff to run the process. They went door to door looking for fatalities and offering help in any way. Others came from Arizona, Albuquerque, El Paso. Even Homeland Security appeared with two huge military style trucks loaded with military and policeman. They had obtained them from a dealer in Seguin, Texas who happened to have five of them in stock.

An illustration of the generosity of Texans was demonstrated by a young lady named Faith Bussey who loaded her car with supplies and drove to Rockport, the city hardest hit by Harvey. She was surprised to find that every shelter she visited already had what they needed.

The culture of Houston is that neighbors are there when you need them; otherwise, they allow each other maximum privacy. This was true this week when in a time of need neighbors opened their homes for those who were displaced, and neighbors who had had little contact before became friends.

Thankfully, according to police officers I spoke to there has been little looting. Texas has an open carry law, and I saw at least one neighbor with a sidearm. The Harris County District Attorney has threatened potential looters with up to a life sentence. Informed outsiders have said that the lack of looting has been remarkable.

A few highly improbable things occurred during this trying time.

One neighbor whose house was flooded with several feet of water gave birth to twins on Wednesday before Harvey arrived on Friday. Remarkably, her mother's maiden name was Harvey!

A longtime friend had a home in Rockport, which took a direct hit from Harvey, as well as a home in Houston. Her Rockport home was unaffected, but her Houston home had five feet of water.

A few days before Harvey I sent a humorous first-time tweet to Dagen McDowell, a Fox Business anchor. She responded with a 'Like.' A few days later at 5:00 am, after sleeping the night in my car, I did my regular check of the water rising on the street in front of my home. I encountered two men in two trucks. It turns out they were Jeff Flock and Jason Racki from Fox Business. They were going live in ten minutes and asked to interview me. With a flooded street behind me, they did so. The show I was on was anchored by Dagen McDowell.

I have remained in my home since the flooding began, except for the night I slept in my car, keeping watch on my neighbor's homes and mine. After nine days I still do not have electrical power and likely will not have it for several weeks. The electric equipment which we must access is still under water. But because I have been so blessed by not having my home flooded, the lack of electricity has not been a big thing.