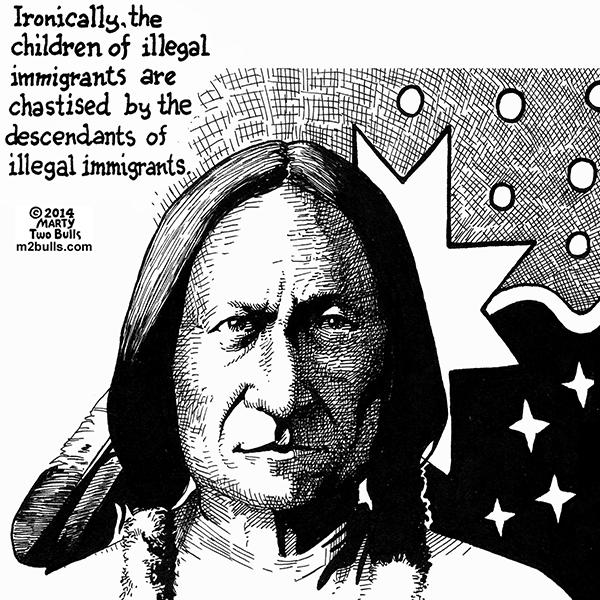 People often take an aspect of history and twist or embellish the facts to create falsehoods to make their own points (right or wrong), or to score points as educators, politicians, pastors, journalists, or whatever.

Learn to question what even quite respected people say - they can be wrong, whether by accident or intentionally, either in the facts they present, or in the use of those facts. Sometimes "it just ain't so!" We now have more capability of learning facts and reasoning than ever in history. But we also have the capability of more fraud and lies being spread than ever before as well! How can that be? We have to check the 'fact-checkers,' sometimes quite thoroughly.

In light of this questioning spirit, were the early settlers in North America really 'illegal immigrants?' The settling of America - was it "illegal immigration" as some purport? Were there laws established in North America that the early settlers broke? I don't think so. Did the native Americans of the 17th century and before have the sole and final rights to the land that they occupied? The "noble" native Americans were tribal in their self-governing, they had their own territories or 'nations,' they fought one another for land and natural resources, and they conquered other tribes at times in bloody wars - they were not always so 'noble.' They were not just a homogenous group of peace-loving residents who were invaded ruthlessly by the European conquerors. (Note: This is not to say that I believe the native Americans were always treated right or fairly by the 'white people' who were coming into this newly 'discovered' continent. That is another part of the story of history...)

There are those who claim that the U.S. southwest territory rightfully belongs to Mexico. Some say that Mexicans have the right to just come into the U.S. regardless of our immigration laws. You will hear that only those who are 'law-breakers' should be deported. Well, ALL "Illegal Aliens" who are here illegally are by definition "LAW-BREAKERS," aren't they? By the way, where did those who populate Mexico come from originally? Most of them are descended from emigrants of Spain if you go back far enough. Where does it stop? Should those with Spanish blood be sent back to Spain from Mexico?

In fact, doesn't Mexico have some really beautiful beaches and resort/vacation areas? Regardless of Mexico's immigration laws, shouldn't we Americans be able to just go down to Mexico and usurp whatever we want, especially those who have the finances to do so? After all, we are all humans, and the earth belongs to all of us! Or does it? I have heard that Mexico has some fairly stringent immigration laws, and some harsh punishments for those who violate them.

Immigration laws protect modern countries from being overrun by those who could ultimately weaken and possibly destroy the very reasons they had for wanting to come into a country. Much of the discussion concerning the illegal immigrants seems to disregard the general 'law of unintended consequences.' People cry out for compassion for masses who need our welcome and support. But it can be compared to pulling so many people into a lifeboat that the whole boat sinks, and all the souls are lost.

For instance, people discovered how beautiful the Hawaiian islands were, and so more and more people visited there, necessitating more hotels and infrastructure, and more support residents, and more people, and more building...and soon the very beauty of the islands that drew people there was destroyed by the people who wanted to see it! This has happened in countless tourist destinations around world.

There also seems to be a law of 'ugly ulterior motives.' There seem to be many reasons (read: "excuses") for just letting immigrants from our southern national neighbor to just come right on into our country. Some want new voters; some say they want to 'help' them, seeing them as needy and dependent; some want cheap labor for doing work 'that Americans won't do'; some even say these immigrants can 'help' our nation! If these masses of immigrants choose to willfully disobey the laws of our country into which they come, and disrespect very foundational aspects of this host country, then how are they really going to help our country? If they can help our country so much, why is it that they are not helping their own country? What are the motives of those who wish to come into our country, especially those who do so illegally? The laws are in place to help there to be some sense and order to it all.

All of this has to do with where we are at right now in history. History is being made, and we are part of it.

You can learn to love history, study it, and find your place in it. Your parents and their parents came before you - if they did well, you might love them dearly. If not, then you could even despise or hate them. No matter which it is, you can determine to do YOUR PART to make things better for yourself, your children (if you are so blessed), or for those around you and for the world we live in. Whether you like it or even realize it or not, you are making history with your life - you are a part of history, and no matter how small, you can leave your own mark on history.