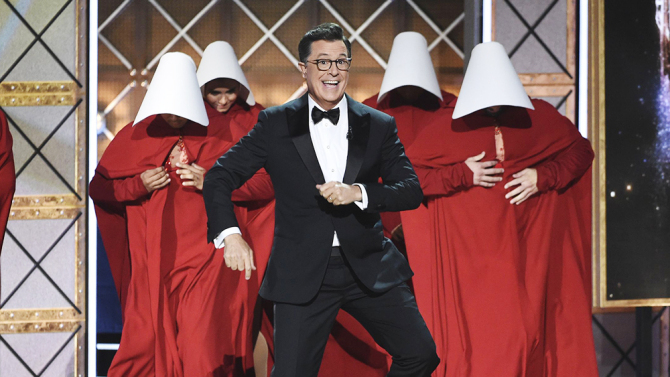 Wasn’t it Einstein who said doing the same thing over and over again and expecting a different result is the surest sign of madness?

Well to see the spoiled, pampered Hollywood brats acting their emotional age, while not surprising, certainly confirms that they are not very bright either.

Don’t they get it that the only thing that keeps them in their Limos and guarded, walled estates are average Americans forking over their hard-earned dollars to see their all-too-often vacuous films and TV shows?

Being such principled purveyors of political truth we should then ask them: “If you dislike us so much for voting for Trump, instead of merely sneering at half the country at one of your social gatherings amongst all of your sycophantic cronies, why don’t you really show us the courage of your convictions by urging all Trump voters not to buy tickets to your films and not tune into your shows? Tell us that you don’t want to take our tainted money. Then if shunning half of your audience reduces your lavish lifestyle to a trailer or studio apartment - so be it. At least you have stood on your principals.”

Excuse me…I was laughing so hard at that image I almost fell off my chair. Can you imagine any Hollywood, media, or Bi-coastal elite doing anything, other than blowing hot air, that would actually threaten their privileged lifestyle?

And yet they should worry - that is if they were actually acute enough to be aware of the inexorable laws of cause and effect. Why? Because this year's Emmy Awards Show, just like last year's, set a new record for the lowest viewership ever! If this trend keeps up, how long will it be until the Emmy Awards are watched by only the people there? Which given their shallow, smug, self-indulgence probably wouldn’t bother them until the day they woke up to find their gravy train derailed because they people they treat with such contempt had finally ceased to buy their product.

Because that’s all they are - purveyors of a product.

They are actors, not statesmen, not philosophers, not sociologists, not oligarchs, and definitely not political commentators worth listening to. They are tradesmen being paid to perform the task of entertaining us! We don’t pay them to listen to their opinion. We are not interested in their opinion. In the age-old words, all we want from an entertainer is to, ’shut up and entertain us.’ And in case you are still not sure of what that entails, Hollywood, we can tell you what it is not. It is not chiding us, preaching to us, or sneering at us. We don’t care about your opinions. Your only job is a simple exchange of money for services - just like the rest of us. You entertain us and we’ll give you money if you do. But you can take this to the bank. When we no longer find you entertaining - such as when you spout your elitist personal opinions - we stop paying to see you. And in spite of your lofty rhetoric, I don’t think you’re going to like that very much.

Hollywood should likewise consider, which they would if their intellect was as sharp as they think it is, that we are living in a world of rapid technological change, and even their outrageous entertainment salaries are as vulnerable to that change as everything else is.

Consider the music industry. Twenty-five years ago musicians were making millions on record and CD sales - then came streaming music and now there are thousands more artists and very few who can make it on music sales alone. Most big incomes are made now only by touring.

Same with books. When I first became an author in 2001 you had to have an agent, a publicist and a big name publishing company behind you. During the release of my first hardcover book for a major publisher, I did over 100 book signings in 2 months!

For my 9th book, I did less than a dozen book signing because now most of the books are sold online and the majority are ebooks and audiobooks.

Another example of the changing face of how people get their entertainment is the venerable print industry, which during my career in publishing, hit its zenith.

Since then the amount of print media has declined each year with the majority of city newspapers and magazines down to skeleton crews or no longer even in business.

Just this week the liberal music icon, The Rolling Stone, announced it was up for sale. Likewise, the once-trendy Village Voice gave up the ghost, and the once powerful NY Daily News sold for…$1.00!

Thus to come full circle, we might point out to the smug, insulated Hollywood libs that it is interesting to note that almost all of the entertainment and media casualties have one thing in common. They were all owned and staffed by left-leaning, liberal slanted, self-styled media mavens who showed nothing disdain for the average American. Do you suppose that will give Hollywood pause in considering their own future as the pampered and petted elite?

I think instead we’ll have to content ourselves with the fact that Karma is inexorable and the wheel of 'who is on top' continues to turn and perhaps sooner rather than later it will turn back to where actors and entertainers were just a mere one hundred years ago - folks who lived in boarding houses, worked long hours for modest pay, and did what they did because they enjoyed it - not because they were treated like royalty.

And when that day comes, and the pompous entertainment elites have been thrown off their high horse, maybe we’ll at last feel that they are finally back to the business of doing what we pay them to do - entertain us.