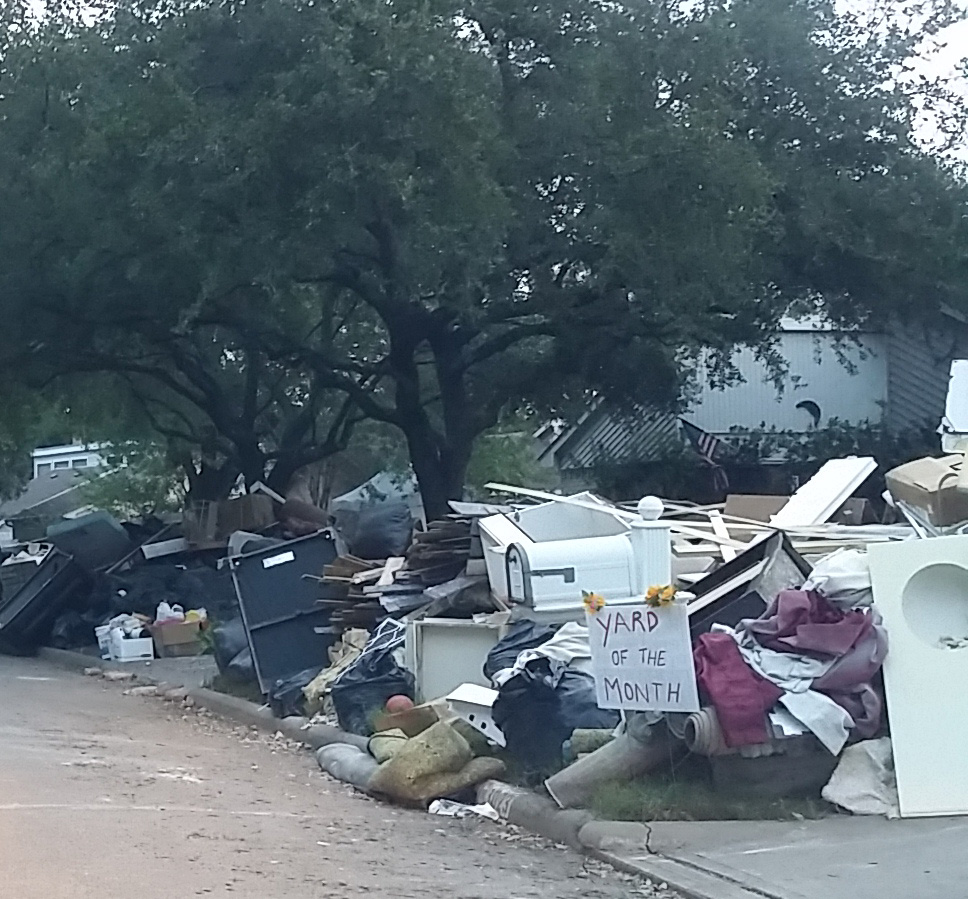 Author’s Note:  I wrote this article weeks before Hurricane Harvey, but felt that unaltered it well explained the wonderful response of each Houstonian to the challenge.]

Some are surprised at how much I love Houston. Small town boys often never adapt to the big city. I did. The first day.

My first night here in 1968 I experienced the energy of the city by simply going with friends to a Shakey’s Pizza Parlor on Westheimer. I felt: This was home! I remember thinking that I could explore Houston for the rest of my life and never see it all - unlike McDade, Texas where I grew up and once gave a friend a tour of every street in the town in 15 minutes.

McDade (pop 250) was located on highway 290 thirty-five miles east of Austin. I grew up there and then spent five years attending and receiving two degrees from the University of Texas at Austin in 1968, before moving to and becoming a lifelong resident of Houston.

I had come to Houston with an accounting degree and joined Arthur Anderson & Co. located in the Bank of the Southwest Building on Main. I remember one morning looking out the window and saw riders on horses with covered wagons going down Main celebrating the annual Houston Livestock Show. It hit me. Houston just might be one big cow town made up of small-town boys like me. At that time not too unlikely an observation.

I love Houston for many reasons.

I love Houston because it has always maintained its open and friendly character. This is likely caused by its lack of any natural or other boundaries except the Gulf Coast. It can expand all the way to San Antonio or Austin without any Houstonian feeling more crowded. A newcomer does not take up anyone’s space - unlike more crowded cities with natural barriers where each new resident’s space takes away from those already living there - mostly vertically. Studies have shown that the more crowded humans feel the more hostile they will become. This to me more than anything else explains the openness and friendliness of Houstonians.


Houstonbecause business, not the government, is king. Being a swamp in its early days caused the Texas capital to be moved to Austin allowing Houston to, fortunately, develop a strong orientation toward business rather than the government. It allowed the visionary Allen brothers to create a city with uncharacteristically wide streets and an even bigger can-do attitude where businesses of all sizes are respected. Those living in elite River Oaks or more modest dwellings treasure the small business owners who do their taxes, do their hair and nails, clean their homes, mow their yards, complete repairs, and do an occasional renovation. They pass the names of the best of these around based on merit. And because the outstanding free enterprise system in Houston allows the best of both small and large businesses to rise to the top, fewer regulations are required here.

I love Houston because it has a legacy of risk takers. From those early oilmen who bet all onahole they drilled into the ground to those that still bet it all on one they drill today. From those like Jim Mcingvale who bet his last $500 dollars on an ad to sell furniture promising it “will save you money” and still using the ad today after building a multimillion-dollar business. From those like George Mitchell who despite being told for decades that fracking would not work, made it work, and has made America energy independent. As a testament to the goodness of successful Houstonians, all have given back to Houston as a model for businessmen everywhere.

And finally, I love Houston for the fact that although it is America’s fourth largest city, it has little in the way of a pecking order or a status system. I believe this is a natural result of the significance of Houston’s two largest industries: real estate and oil. Both go bust periodically. Both are cyclical where up goes down and down goes up.  The local saying goes: “Treat every person well no matter who they are because you may be working for that person tomorrow.”  In most cases, the substantial difference between those who have money and those who do not is that those who have money have money.  Even those who live in wealthy upscale River Oaks do not flaunt it to diminish others. As the owner of Houston’s oldest residential construction company, I have worked for some of Houston’s most wealthy and powerful people from a conservative former Director of Exxon to a nationally prominent liberal criminal defense attorney. I have NEVER had any of the wealthy mistreat me or the much educated or not so educated subcontractors I employed. As businessmen themselves they respect those who produce, irrespective of any other quality. This is Houston. And in my mind, this is Houston’s finest quality.
Copyright ©2017
Read more by Vern Wuensche
Tweet