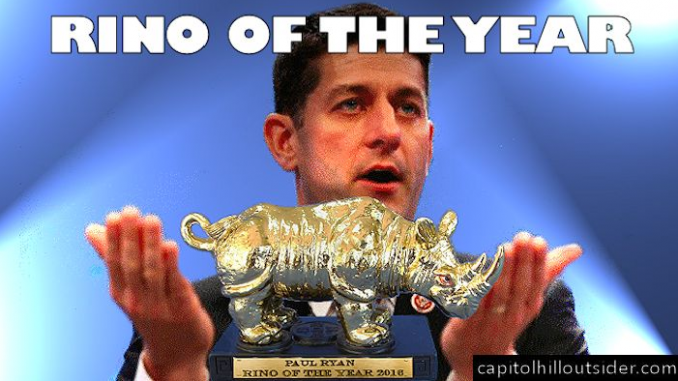 In the land of the blind, the one-eyed man is king. In other words, due to one's high status that person can claim anything without fear of being challenged by those who know less. So it is with Washington Times' columnist Richard W. Rahn's muddled analysis of Paul Ryan (R-WI), an 18-year veteran of the Washington bog. Given this writer's flowery assertions, however, he sounds like the newly appointed cheerleader of the Republican excuses brigade! To that end, his doe-eyed opening sentence speaks volumes:


“It is tough to play hardball with your friends.”
Has Congress metastasized into a millionaires' social club? Are Mr. Ryan's fellow representatives supposed to be playboys for him to pal around with? If that's now the prevailing mind-set on Capitol Hill, it certainly explains a lot! Specifically, Gallup's record low approval rating for Congress in 2017: a measly 16%. And is that statistic any surprise given their collective failure to repeal Obamacare—after seven years of broken GOP promises? Thus, is it reasonable to sing Paul Ryan's praises as he's one of the primary figures responsible for the ongoing legislative morass?
That's not Pauly's fault, says Rahn. The real trouble is he's just so darn agreeable! Is affability suddenly a personality flaw in politics, or in the business of governance? If so, will someone send Mr. Ryan “How to Win Friends and Influence People” by Dale Carnegie? Recall, in the natural world that honey's sweetness attracts many more flies than vinegar; so it is with human nature. In fact, didn't President Ronald Reagan epitomize a sunny disposition—and didn't that trait make him more effective as a leader, not less so?
Naturally, the reality of Speaker Ryan's inherent inability to lead is quickly glossed over:
“[He is] not particularly good at managing a large number [read: 240 of 435; one vacancy] of independently-minded people.”
For his unsuccessful cat-wrangling of only his party (and half of the legislature) a premium is earned: a $223,500 annual salary. That's a whopping $49,500 more than the House's rank and file. (By comparison, President Trump runs the entire executive branch for $400,000 a year, per Title 3 of the U.S. Code; donating his whole salary, save one dollar, to charity.)  Mr. Ryan has not followed suit—and given his lack of positive results—perhaps he should.
But wait, Rahn claims, Mr. Ryan real aptitude is as a “policy wonk." If that's so, why did he capitulate to the Democrats' two trillion dollar debt-busting budget rather than opposing it? Likewise, is he “highly accomplished” for losing control of the budgetary schedule as Mr. Rahn admits? For context, when Speaker Ryan assumed his leadership role on October 29, 2015, the national debt was $18,152,590,112,385.69.  As of this writing, it has increased to $20,173,505,864,062.25. After almost two years, why are all of the economic indicators under his “expert” tutelage still going in the wrong direction?
Beyond the escalating debt, proof is seen in the pitiful pre-Trump 2% GDP. By those measures alone, Mr. Ryan would have been fired in the private sector long ago. After all, as Speaker he determines the agenda; same as his chamber controls the nation's purse strings. And despite his hollow-sounding protestations about not initially wanting the post, the fact remains that he took it. In this way, he seems to cultivate a regular guy “Mr. Smith Goes To Washington” persona. Still, the fact that Mr. Rahn doesn't see through this slick veneer is troubling. It means his favorable depiction of Mr. Ryan is untrustworthy. As that is the case, perhaps a fictional one can illuminate his real-life subject better:
“Listen, I'm a politician which means I'm a cheat and a liar, and when I'm not kissing babies I'm stealing their lollipops. But it also means I keep my options open.” – Dr. Jeffrey Pelt, National Security Adviser, played by Richard Jordan in “The Hunt for Red October” (1990)
Now that sounds like a realistic baseline with which to evaluate any longtime D.C. insider. Yet, unlike Dr. Pelt, one would never expect Paul “not ready” Ryan to be so candid about his own history of mealy-mouthed capriciousness regarding his faux support of President Trump.
Hence, in the Trump era, the American electorate has had their fill of nice guy RINOs (Republicans In Name Only) who embrace the status quo by subverting “M.A.G.A.” policies. By his record and his actions, that's who Paul Ryan really is.  That's also precisely why our results-driven president cut a three-month extension with the Democrats (for government funding, and Hurricane Harvey relief). And why not? When has that fresh-faced facade of the do-nothing Republican establishment ever been a friend to him? Indeed, championing such incompetence demonstrates a profound obliviousness to modern-day political dysfunction—that even a clear-eyed low-information voter can see.