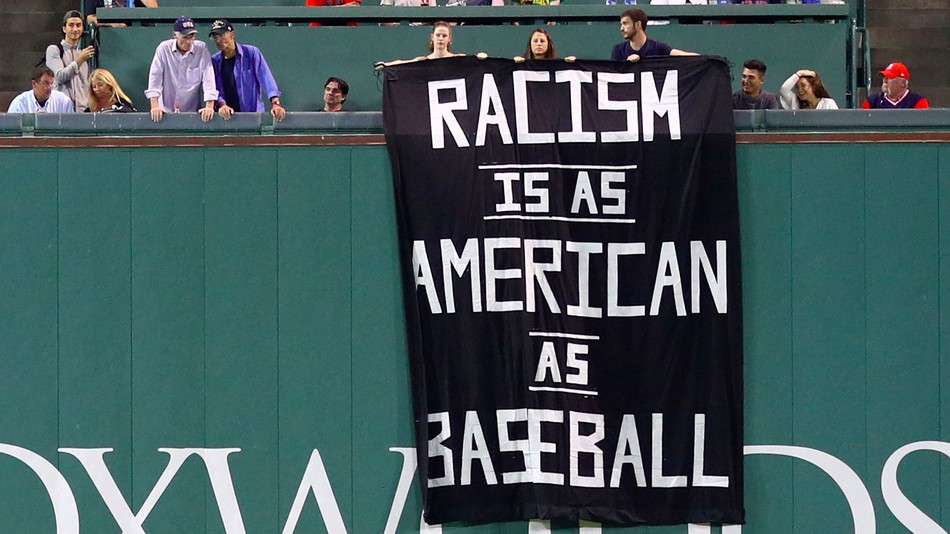 When a small group of people recently hung a banner in Fenway Park, they received widespread praise and positive media coverage. They became instant celebrities – for showing off their ignorance about and disdain for their own country.

To hang a large banner which reads “Racism is as American as baseball” is to hang a banner which reads, “I know nothing of the human condition.” For those on the political left, possessing only limited knowledge is a requirement. Did America once allow slavery? Yes. Were there laws, for decades, which were based on race? Yes. Then America must be a terrible place. It’s that simple; no other information is required.

Reality is a little more complex. Not only did Western Civilization end slavery within its domain, but slavery exists in other cultures, to this day. Why not be honest, go to West Africa, and unfurl a banner which reads, “Slavery is as African as soccer”? You might get shot or knifed, and you wouldn’t make it out of the country alive, whichever African country you chose, given that slavery still exists in numerous nations on the continent. At least you’d die honest.

But back to Fenway Park. Living in the United States is great, overall. It’s sanitary. The freedom is incredible. There are lots of sporting events on TV or to attend in person. Where you can hang a banner. To show your ignorance.

Since Cain and Abel, the human condition has been conflict. War, strife, turmoil, racism, sexism, or whatever other “ism” you can envision. It’s not pretty. Billions have starved to death or died of disease caused by war or various acts of evil. The human condition is ugly.

The US is one of those rare countries which has helped improve the human condition, even though it has committed its own sins. Why has even the greatest nation in the history of mankind committed misdeeds? Because our country is populated by humans.

These practices are neither right nor good, but they highlight the fact that Man is inherently bad. We can improve, grow, progress, but our evil nature remains. We can outlaw slavery, but it still exists in many nations. We can decry torture, but it is a form of exercising power for tyrants. (Note: I refer to true torture, not enhanced interrogation techniques such as water boarding.) People continue to steal, murder, and destroy. We do not wish it to be so, but it is so. A read of history makes clear the true nature of Man.

But back to Fenway Park. To hang such a banner as “Racism is as American as baseball” is to simultaneously show contempt for a force for good around the world and to not understand the human condition, as referenced above. Racism is not unique to America, and to believe that it is shows utter ignorance – and identifying this as ignorance is being generous. Who hates his own country so much that he would unfurl such a banner? A left-winger, that is who. The left hates America as it is. They lead us to a conclusion that is startling in its shallowness and yet inescapable to conclude: leftists desire a world that has never existed and will never exist. To believe otherwise is to be a blind fool bent on establishing Heaven on Earth. Unfortunately for us all, this is still Earth.

The Founding Fathers were deeply immersed in an economy which included slavery. Had they attempted to eliminate slavery at the time, the nation would have unraveled before it congealed into a Union. A force for good that never would have been established. Understanding this, the Framers of the Constitution created a system which would allow for a peaceful end to slavery. If not for the actions of certain people decades later, particularly judges, the peaceful transition probably would have occurred. Instead, men fought and died and eventually ended that evil in this country.

It took decades after slavery ended, but our country ended institutional racism. One action which helped was that people became more educated about their fellow human beings. Unfortunately, the people who hung the sign at Fenway Park are not educated – they may be schooled, but they are not truly educated. There is a long list of other countries where they should hang such a sign, but their chances of returning to the US would not be good. If they did return, they would understand that “Freedom is as American as baseball.” Even free to be shallow, uneducated, ignorant, left-wing malcontents.