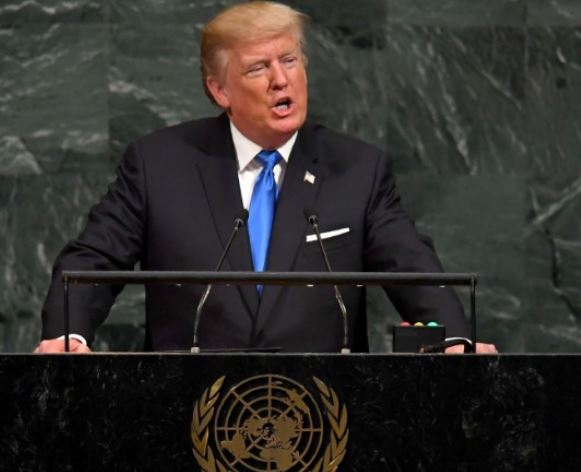 The “America First” president said, “The United Nations Security Council recently held two unanimous 15-0 votes adopting hard-hitting resolutions against North Korea, and I want to thank China and Russia for joining the vote to impose sanctions, along with all of the other members of the Security Council. Thank you to all involved.”

Trump should have denounced China and Russia for making a nuclear North Korea possible. Then, he should have announced a U.S. withdrawal from “The House That Hiss Built.”

Peter Vincent Pry, the chief of staff of the congressional EMP Commission who served in the CIA, points out, “There are many examples of technology transfers from Russia and China to North Korea, proving they have helped accelerate Pyongyang’s nuclear missile programs. North Korea’s nuclear missile threat is built upon Russian and Chinese technology.”

So, Trump is thanking the Russians and Chinese for making North Korea into a nuclear weapons threat and bringing the world to the point of a nuclear exchange.

Hard-hitting resolutions? It’s bad enough that we stayed in the U.N. after we found out that its founder and first acting Secretary-General Alger Hiss was a Soviet agent and spy. Now this organization Trump says was founded on “noble aims” has brought the world to the point of war.  In this case, the stakes involve the lives of tens of millions of Americans and South Koreans.

Conservatives are apparently so used to seeing American interests sold out by politicians like Barack Hussein Obama that they greeted Trump’s “tough” speech at the U.N. In fact, he was notoriously soft on Russia and China.

It was entertaining for Trump to talk about the failures of socialism and communism, except for the fact that China has perfected a system of Communist Party control and expansion financed by Western capitalism. The result is an emerging communist superpower that is driving an alliance of anti-American countries known as BRICS and pursuing its own global trade apparatus, the Belt and Road development initiative, financed by a world currency other than the dollar.

By the way, the current U.N. Secrerary-General, António Guterres, is a former head of the Socialist International. And yet Trump bashed socialism while congratulating him for leading the fight for “U.N. reform?” Does Trump really believe this? Does he expect us to believe this?

Continuing to waste tens of billions of mostly American dollars on the U.N. in the name of “reform” is one thing. Setting the stage for the mass murder of millions of Americans by pretending the U.N. will do something about it is something else.

Pry notes, “The latest evidence North Korea’s nuclear missile program is being helped by Russia and China is their successful H-bomb test on Sept. 2…The demonstrated yield of North Korea’s H-bomb is reportedly estimated by the U.S. intelligence community to be 120 kilotons (160 kilotons according to Japan), or about 12-16 times more powerful than the Hiroshima A-bomb, comparable in power to two-stage H-bombs of the United States.”

He adds, “Unfortunately, North Korea’s own description of its nuclear missile capabilities has consistently been more reliable than U.S. intelligence community estimates. These estimates have wrongly assumed North Korea is working on its own, without help from China and Russia.”

So the situation is probably worse than what we are being told. How many intelligence failures do we have to suffer through as a nation before we conclude that the incompetence constitutes treason?

The ultimate objective of the communist-Muslim alliance, as we explain in our book The Sword of Revolution, is the destruction of the United States and Israel. In the meantime, they aim to neutralize South Korea as a U.S. ally and integrate the free nation into one Korea under communist domination. That has been their objective all along. They tried it militarily. Now they’re going to do it diplomatically.

Trump said, “It is time for North Korea to realize that the denuclearization is its only acceptable future.” The time is past. A real “America First” policy, as noted by Pry, is that “We cannot live with a nuclear-armed North Korea because someday the evil regime in Pyongyang will fall, and they will want to drag us with them, down into darkness. We must strike and disarm North Korea of at least those few nuclear assets that can threaten U.S. cities, before it is too late.”

The alternative offered by Trump is to remain under the threat of nuclear blackmail from Communist North Korea and its backers and then retaliate once millions of Americans are dead. That is the threat we are now under. And we have Russia, China, and the Obama Administration to “thank” for that dire predicament.

Based on what we heard from Trump at the U.N., Pry’s advice will not be taken.

The “denuclearization” may indeed take place but under a plan devised by Communist China and Russia and supported by the same Deep State operatives who allowed North Korea to go nuclear.

The plan was all laid out in Selig S. Harrison’s book, Korean Endgame: A Strategy for Reunification and U.S. Disengagement.

The last word in that title, “disengagement,” is the key. The U.S. will disengage, leaving the North Korean regime in place and South Korea at the mercy of North Korea’s backers. The book, published in 2002, asked, “Should the U.S. get out of Korea once and for all?”  It’s taken a while but the answer is upon us.

When an “America First” President like Trump thanks Russia and China and the U.N. for a disaster in the making on the Korean peninsula, you know we are in deep trouble.

Japan will be the next U.S. ally to be abandoned. It will have to rearm, and quickly.

Over in the Middle East, Israel will have to consider the consequences. Trump talks tough about Iran, too, but the Iranian nuclear deal is still in effect.

The difference between South Korea and Israel is that Israel has nuclear weapons. That’s a big difference. It could make all the difference in the world – for Israel’s survival.

As for the United States, honest U.S. military leaders are seeing a “multi-polar” world and “multi-domain” threats emerge from Russia, China, North Korea, Iran, and others. We may be too weak to save ourselves. Meanwhile, Trump’s military advisers are sending thousands of more U.S. troops into the no-win war in Afghanistan, where Russia is arming the Taliban killing our soldiers.

Yet Trump thanks Russia for voting for another resolution on North Korea, only the latest in a series of ineffective statements from the world body.

Trump’s first National Security Advisor, retired Lt. General Michael T. Flynn, recognized the dangers. He talked about an “enemy alliance” against America. He wanted to clean out the traitors from the Intelligence Community. That’s why Flynn was forced to resign, after a Deep State leak, and he is facing mounting legal bills in response to Russia-gate Special Counsel Robert S. Mueller’s “investigation.” It’s a probe that ultimately targets Trump himself.

Trump’s supporters have to be honest. “America First” sounds good but it only masks our sharp decline. His U.N. speech excited some members of his base anxious for red meat, but in fact symbolizes an attempt at a truce with the Deep State, in the hope that he will be permitted to serve out his term.

We are entering a period of history in which we can only hope and pray that a communist madman will not oblitate our fellow citizens in a massive nuclear strike. Our own lives now hang in the balance while Trump tries to save his own skin.