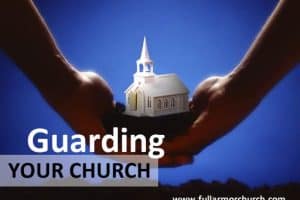 A gunman entered the Burnette Chapel Church of Christ in Antioch, Tennessee, killing one and injuring several others at a September 24th Sunday religious service. Recently, similar acts of violence in places of worship have underscored the need for churches to plan ways to keep congregants safe. There is no place where crowds gather that is immune to the bad intentions of a disgruntled, deranged, or politically-motivated individual.
The premise that a ministry is based on peace fails to take into account that there are those who consider places of worship to be “soft” targets. In this era of active shooters and anti-Christian feeling, pastors must make sure their flock is safe, just like any shepherd must. Unfortunately, not all pastors understand the level of risk, even in “quiet” communities, and the importance of church safety in toxic times. In the 'New Normal,' however, it has become part of the job description.
In my role as medical preparedness writer, it’s my mission to help the average citizen stay healthy in disasters. Lately, I’ve written about hurricanes and earthquakes, but shooter events like the one in the Antioch achurch are also instances where mass casualties can occur. These casualties might be minimized with a plan of action and quick action.
Of course, large churches may choose to hire security professionals and install video surveillance technology. Smaller and less affluent churches, however, might benefit by establishing what I call a “safety ministry.” This group should be comprised of parishioners who have some security experience, such as active and former law enforcement, military veterans, and carefully selected others. Members should evaluate the layout of the church and grounds for weak spots and organize a plan of action for calling 911 and other measures when needed.
This goal might best be accomplished with the cooperation and assistance of local police. They can help train church members how to identify the behavior of possible perpetrators of violence and make sure no laws are broken. The pastoral staff should also be actively involved in this training to assess liability issues that might arise.
The call for volunteers for such a ministry should be made publicly and their purpose should be frankly (but calmly) explained so as to emphasize their benefits to all those attending the church. The formation of a security group in private might otherwise tend to cause concern instead of reassurance.
A simple way to avoid or abort acts of violence in places of worship is the placement of friendly but visible “greeters” or ushers at church entrances. These people can look for anomalies, such as someone inappropriately dressed for the weather. If a person seeking entry is wearing an overcoat in hot weather, it could be because they are concealing a weapon. Having greeters outside could also make it easier to identify those acting nervously, loitering in the parking lot, or other suspicious behavior.
Safety ministry personnel should have the ability to close and lock doors to prevent a gunman from entering. Conversely, they can also open all the exits that could be used to direct congregants out of harm’s way when necessary. Ushers can also look for packages left behind that might hide an explosive device.
In an active shooter event, multiple casualties are incurred, leaving wounded and bleeding victims at the scene. Safety Ministry personnel should have training on how to stop bleeding and equipment such as first aid kits geared to help them accomplish this goal. Indeed, the church might consider arranging such training for their entire congregation.
Although this article is geared towards security during services, a plan of action should be organized for youth group meetings and other activities sponsored by the church.
Of course, the elephant in the room is the question as to whether non-professional security personnel should be armed. I can't give you the answer. This is a decision that must be made taking local laws, risk levels, and the wishes of the congregation into consideration.
Sadly, I envision a future where safety ministries are standard operating procedure for our places of worship, and first aid kits a fixture next to the fire extinguishers on the walls of public places. It may be a challenge to protect people of faith these days, but preparing for untoward events should be the responsibility of every pastor and congregant. With a plan of action, they’ll have the best chance to keep our churches safe in uncertain times.
Copyright ©2017
Read more by Dr. Joe Alton
Tweet