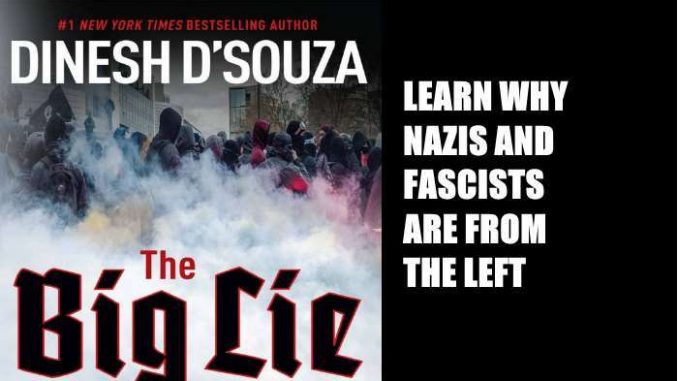 From his book review of Dinesh D'Sousa's latest, Washington Times columnist Michael Taube gets it wrong. Mr. Taube's article title incorrectly proclaims, “Fascists to the right, fascists to the left”. Yet, the whole point of “The Big Lie: Exposing the Nazi Roots of the American Left” is to clarify that Nazism/Fascism/Socialism are political movements exclusive to the left. In other words, despite this scribe's misleading assertion, they are never of the political right. Want an example of a “radical” right-wing group? Try the Tea Party!

To be fair, Mr. Taube touches on Ronald Reagan's famous “60 Minutes” quote from 1975, “If fascism ever comes to America, it will come in the name of liberalism.” But what else did “The Gipper” say that this reviewer vitally left out? To continue with Mr. Reagan's now prophetic words:

“And what is fascism? Fascism is private ownership—private enterprise—but total government control and regulation. Well isn't this the liberal philosophy? The conservative, so-called, is the one that says less government—get off my back, get out of my pocket—and let me have more control of my own destiny.”

Put simply, these three sister philosophies of big government cannot be of the right. On a related matter, President Trump cannot be a fascist or a socialist because he is a deregulating, unapologetic capitalist! Likewise, he can't be a Nazi either because he is, for example, staunchly pro-Israel. Indeed, Mr. Trump’s “America First” policies of economic self-determination—and his outspoken refutation of liberals and the MSM—define him as a true patriot in our tumultuous modern age.