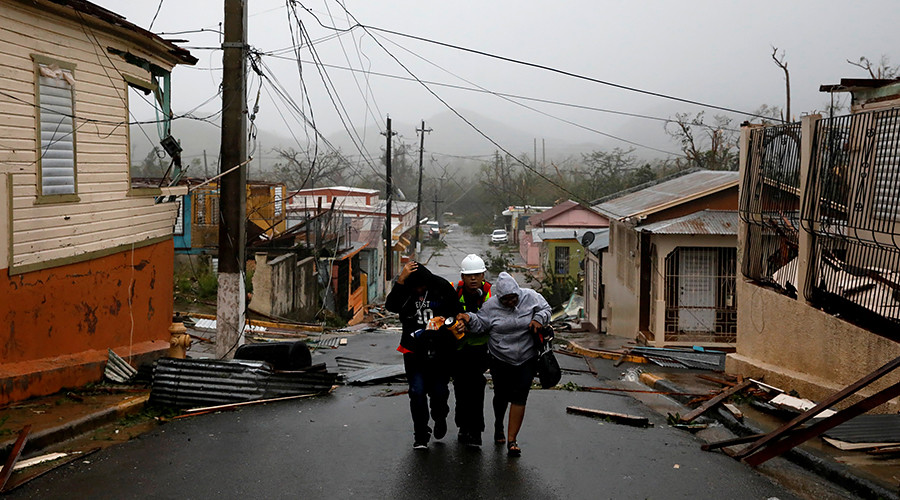 During his visit to hurricane-stricken Puerto Rico, President Donald Trump shocked the bond market when he told Geraldo Rivera of Fox News that he was going to wipe out the island’s bond debt. He said on October 3rd:

"You know they owe a lot of money to your friends on Wall Street. We’re gonna have to wipe that out. That’s gonna have to be — you know, you can say goodbye to that. I don’t know if it’s Goldman Sachs but whoever it is, you can wave good-bye to that."

How does the president plan to pull this off? Pam Martens and Russ Martens, writing in Wall Street on Parade, note that the U.S. municipal bond market holds $3.8 trillion in debt, and it is not just owned by Wall Street banks. Mom and pop retail investors are exposed to billions of dollars of potential losses through their holdings of Puerto Rican municipal bonds, either directly or in mutual funds. Wiping out Puerto Rico’s debt, they warned, could undermine confidence in the municipal bond market, causing bond interest rates to rise, imposing an additional burden on already-struggling states and municipalities across the country.

True, but the president was just pointing out the obvious. As economist Michael Hudson says, “Debts that can’t be paid won’t be paid.” Puerto Rico is bankrupt, its economy destroyed. In fact, it is currently in bankruptcy proceedings with its creditors. Which suggests it's time for some more out-of-the-box thinking...

Turning Disaster into a Win-Win

In July 2016, a solution to this conundrum was suggested by the notorious Goldman Sachs itself, when mom and pop investors holding the bonds of bankrupt Italian banks were in jeopardy. Imposing losses on retail bondholders had proven to be politically toxic, after one man committed suicide. Some other solution had to be found.

Italy’s non-performing loans (NPLs) then stood at €210bn, at a time when the ECB was buying €120bn per year of outstanding Italian government bonds as part of its QE program. The July 2016 Financial Times quoted Goldman’s Francesco Garzarelli, who said, “By the time QE is over – not sooner than end 2017, on our baseline scenario – around a fifth of Italy’s public debt will be sitting on the Bank of Italy’s balance sheet.”

His solution: rather than buying Italian government bonds in its quantitative easing program, the European Central Bank could simply buy the insolvent banks’ NPLs. Bringing the entire net stock of bad loans onto the government’s balance sheet, he said, would be equivalent to just nine months’ worth of Italian government bond purchases by the ECB.

Puerto Rico’s debt is only $73 billion, one third the Italian debt. The Fed has stopped its quantitative easing program, but in its last round (called “QE3”), it was buying $85 billion per month in securities. At that rate, it would have to fire up the digital printing presses for only one additional month to rescue the suffering Puerto Ricans without hurting bondholders at all. It could then just leave the bonds on its books, declaring a moratorium at least until Puerto Rico got back on its feet, and better yet, indefinitely.

According to the Bureau of Labor Statistics jobs data, 33,000 US jobs were lost in September, the first time the country has had a negative figure since 2010. It could be time for a bit more economic stimulus from the Fed.

Shifting the debt burden of bankrupt institutions onto the books of the central bank is not a new or radical idea. UK Prof. Richard Werner, who invented the term “quantitative easing” when he was advising the Japanese in the 1990's, says there is ample precedent for it. In 2012, he proposed a similar solution to the European banking crisis, citing three successful historical examples.

One was in Britain in 1914, when the British banking sector collapsed after the government declared war on Germany. This was not a good time for a banking crisis, so the Bank of England simply bought the banks’ NPLs. “There was no credit crunch,” wrote Werner, “and no recession. The problem was solved at zero cost to the taxpayer.”

For a second example, he cited the Japanese banking crisis of 1945. The banks had totally collapsed, with NPLs that amounted to virtually 100 percent of their assets:

"But in 1945 the Bank of Japan had no interest in creating a banking crisis and a credit crunch recession. Instead it wanted to ensure that bank credit would flow again, delivering economic growth. So the Bank of Japan bought the non-performing assets from the banks – not at market value (close to zero), but significantly above market value."

Werner’s third example was the US Federal Reserve’s quantitative easing program, in which it bought $1.7 trillion in mortgage-backed securities from the banks. These securities were widely understood to be “toxic”– Wall Street’s own burden of NPL's. Again the move worked: the banks did not collapse, the economy got back on its feet, and the much-feared inflation did not result.

In each of these cases, he wrote:

"The operations were a complete success. No inflation resulted. The currency did not weaken. Despite massive non-performing assets wiping out the solvency and equity of the banking sector, the banks’ health was quickly restored. In the UK and Japanese cases, bank credit started to recover quickly, so that there was virtually no recession at all as a result."

One objection to this approach is the risk of “moral hazard”: lenders who know they will be rescued from their bad loans will recklessly make even more. That is the argument, but an analysis of data in China, where NPL's are now a significant problem, has relieved those concerns. China’s NPL's are largely being left on the banks’ books without writing them down. The concern is that shrinking the banks’ balance sheets in an economy that is already slowing will reduce their ability to create credit, further slowing growth and triggering a downward economic spiral. As for the moral hazard problem, when researchers analyzed the data, they found that the level of Chinese NPL's did not affect loan creation, in small or large banks.

But if Puerto Rico got relief from the Fed, wouldn’t cities and states struggling with their own debt burdens want it too? Perhaps, but that bar could be set in bankruptcy court. Few cities or states can match the devastation of Puerto Rico, which was already in bankruptcy court when struck by hurricanes that left virtually no tree unscathed and literally flattened the territory.

Arguably, the Fed should be making nearly-interest-free loans to cities and states, allowing them to rebuild their crumbling infrastructure at a reasonable cost. That argument was made in an October 2012 editorial in The New York Times titled “Getting More Bang for the Fed’s Buck”. It was also suggested by Martin Hutchinson in Reuters in October 2010:

An alternative mechanism could be an extension of the Fed’s [QE] asset purchases to include state and municipal bonds. Currently, the central bank does not have the power to do this for maturities of more than six months. But an approving Congress could remove that hurdle at a stroke...

The Fed lent $29 trillion to Wall Street banks virtually interest-free. It could do the same for local governments.

Where There’s a Will

When central banks want to save bankrupt institutions without cost to the government or the people, they obviously know how to do it. It is a matter of boldness and political will, something that may be lacking in our central bankers but has been amply demonstrated in our president.

If the Fed resists the QE alternative, here is another possibility: Congress can audit the Department of Housing and Urban Development and the Department of Defense, and retrieve some of the $21 trillion that is missing from their accounting. This massive black money hole, tracked by Dr. Mark Skidmore and Catherine Austin Fitts, former assistant secretary of HUD, is buried on the agencies’ books as “undocumented adjustments” – entries inserted without receipts or other documentary support just to balance the books. It represents money that rightfully belongs to the American people.

If our legislators and central bankers can find trillions of dollars to bail out Wall Street banks, while overlooking trillions more lost to the DoD and HUD in “undocumented adjustments,” they can find the money to help an American territory suffering the worst humanitarian crisis in its history.