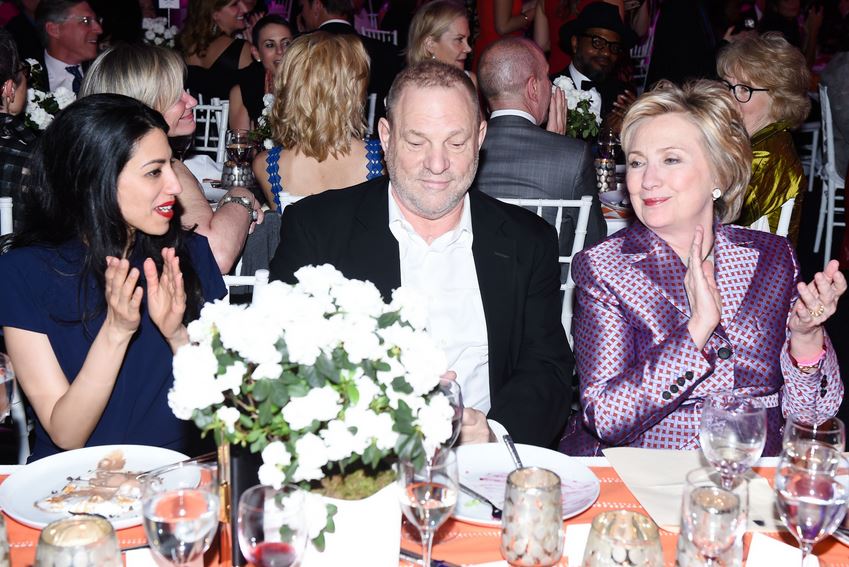 How the masters of Tinsel-town use smoke and mirrors to continually cover up for their own.

Wow! Did you hear about all the Hollywood stars and outspoken pop singers who had blown the whistle on Harvey Weinstein for the serial abuse of woman during the many years he openly practiced in his 'casting couch' auditions?

But, now that it's finally out in the open, you must have seen the big march and rally by all the women's groups dressed in pink hats to protest all the big name Democrat politicians such as; Hillary, Chuck Schumer, and Obama for hanging with the perv and taking his campaign donations.

However, speaking of Hillary, I do have to confess that I thought it was very brave of her when she issued her statement about how disgusting it was to have a "sexual PREDATOR in the White House." That is until I read that she was referring to Trump instead of the one that she spent eight years with in that same White House!

And certainly you watched the topical Saturday Night Live and all the “brave” Late Night comedians, especially weeping Jimmy - “the conscience of the nation” - Kimmel -  who after bashing Trump night after night realized that they needed to likewise skewer the disgusting behavior of a liberal big shot.

On the other hand, we must certainly give credit to crusading news networks like NBC, who, when a reporter came to them with this story, jumped right on it in the interest of being impartial in their news reporting and preventing the abuse of more women.

Isn’t it strange how Liberals, who spend their lives turning over rocks for grains of sand to use in their never-ending quest in making mountains out of molehills, keep their eyes tightly shut when faced with the Matterhorn of Liberal rot right in front of them? No, I take that back. It’s not strange at all. It’s simply another glaring example of the Liberal double standard. Proving once again, if it wasn’t for double-standards, the Liberals would have no standards at all.

However, in this instance, despite the years of cover-up and enabling by the Liberal media and entertainment industries, the genie of sleaze is finally out of the bottle.

Harvey thought he could smooth things over by offering to go after one of the Lib's biggest targets, the NRA. But as much as Lib-town would have welcomed that, the news and cover-ups were too far gone for even that, and the “yuk" factor insured that they couldn’t sweep it under the rug as usual.

As a result, of course, after all the sleazy details came out  - with legions of women relating harrowing tales of being groped, propositioned, and coerced into putting up with the pervy mogul - the 'mainstream media’ really raked old ‘Harv’ over the journalistic coals. In fact, they actually peppered the perv with hard-hitting questions when they caught him boarding a jet to escape to the more understanding sex salons of Paris.

Why, you almost had to feel sorry for the guy, being badgered with tough, hostile comments from reporters such as; “Hey Man, how are you doing?” “You feeling OK?” "We really feel for you, man.” "Hope things get better for you.” "Hey, Harvey hope you get all the help you need.” “Feel better man!”

Wow! Poor guy. He barely escaped with his life. How so? I mean a person could be drowned in the puddles of obsequious drool dripping from the tongues of the sycophantic collection of lap dogs that pass for ‘mainstream media’ reporters.

And then there were all of the Hollywood stars who rose up to condemn the outrageous behavior by contrasting it with the good examples that they have set. Except - when shortly after announcing their pious protestations, they embarrassingly have their own, “oops”, moment. Such as, in the case of one liberal Boston actor, who right after an “I’m shocked by that sort of behavior,” statement, saw a tape surface of the star's own drunken interview, in which he likewise exhibits his own sleazy brand of sexist behavior.

So what do all of these examples of Liberal hypocrisy have in common? They seem to pass largely unnoticed by the hypocritical liberal media.

Is that because the liberal media and the Lib community they serve are basically amoral and interested only in slanting all news coverage to further their own leftist agenda? Hmm…possibly.

Or could it be that they are so wrapped up in themselves and their elitist propaganda bubble that they can’t see their own double standard? Probably.

Or perhaps because by and large Liberals are totally devoid of even the most basic sense of humor, other than to say “Trump is a jerk!” - which passes for high comedic art on the late night shows? This makes it very difficult to recognize irony when it takes up residence on your own doorstep. Very likely.

Or is it because they know that they are dishonest, disingenuous, dissembling, humorless hypocrites and just don’t care as long as they can retain their wealth, privilege, and position?

What then, are thinking people to do when faced with such obfuscation and deliberate misdirection of the obvious truth?

We must be like the one child standing in the crowd in the old fairy tale of the “Emperor's New Clothes.” While the sycophants, hypocrites, and flatterers, fawn and dissemble, we must point out each time in a calm and reasoned, but firm, clear voice that the Liberal Emperor's presentation of their version of the truth is stark staring naked.

I think the world is beginning to catch on.