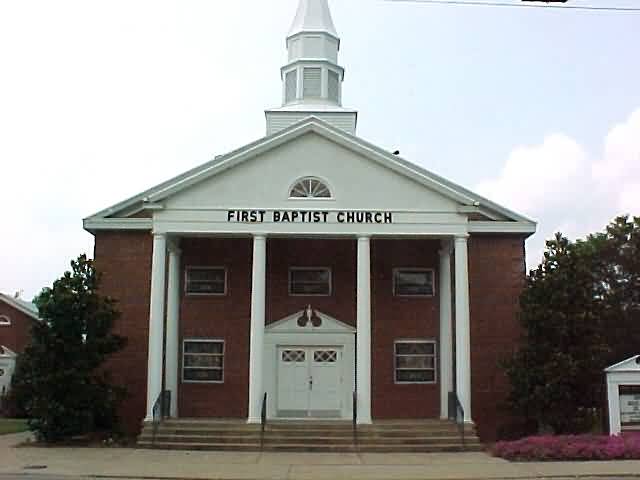 A generation ago, it was common for hospitals, jails, schools, and other institutions to have a place on their forms for a person to state their Religion–Protestant, Catholic, or Jewish. However, there was no Baptist designation. Many will say that Baptists are like Methodists, Assembly of God, etc., just another Protestant group; but that is not true. Baptists protested the Roman Catholic excesses as did other groups, but unlike the other groups Baptists were never a part of Rome. Baptist Churches or baptistic groups were always contemporaries with the Roman Church and never broke away since they were never in that religious group.

Since this is the 500th year of the anniversary of the Reformation, many have asked why so many groups split from the church that Christ established while others want to know what was the first authentic church. It is assumed by the uneducated that the Roman Catholic Church was the “mother church” but that is not an historical fact. Well, if not the Catholics, then who?

The first church was in Jerusalem and it was a Baptist or baptistic church! If not, what were they? My critics can tell me what the Jerusalem church believed and practiced and I will adjust to their beliefs and practices.

The Encyclopedia Britannica revealed, “Baptists can be traced to 618 A.D. and it is presumed that they originated from the original source of the churches.”

In 1819, the King of Holland appointed Dr. J. Dermout and Dr. Ypeij to prepare a history of the Dutch Reformed Church and also to report on the claims of the Dutch Baptists. Following their research, they wrote: "We have now seen that the Baptists, who were formerly called Anabaptists, and in later times, Mennonites, were the original Waldenses...On this account, the Baptists may be considered as the only religious community which has stood since the days of the apostles, and as a Christian society which has preserved pure the doctrines of the gospel through all ages."

The best evidence for your position is when evidence comes from your enemy or opponent, and the Campbellites or Church of Christ people have been longtime opponents of Baptists. The following words of Alexander Campbell, founder of the Church of Christ movement, are taken from the authorized edition of the Campbell-McCalla Debate, “Clouds of witnesses attest the fact that before the reformation from Popery, and from the apostolic age, to the present time, the sentiments of Baptists and the practice of baptism have had a continued chain of advocates, and public monuments of their existence in every century can be produced” (Alexander Campbell, in debate with W. L. McCalla, held at Washington, Mason Co., Ky., Oct. 15, 1823, p. 378).

Baptists have been fervently opposed to government control or involvement in their church affairs even when it would have benefited them! In colonial Virginia, everyone was taxed to support the established religion of the Episcopal Church (Church of England); however, Baptists refused to support that error by not paying the tax.

Those Baptists were hassled, harassed, and hunted; then fined, whipped, and even imprisoned; but they prevailed. They would not pay taxes to support the local vicar of the Church of England. In fact, they were told that they could receive tax dollars to support their Baptist Churches, but the principled Baptists refused the free money! That resulted with the Anglican Church being disestablished in Virginia. Now, no tax dollars would support any church.

In our day, almost all groups are taking “free” money, even Baptists! Daycares, Christian schools, homeless shelters, etc., are being financed with tax dollars. And even Baptists have learned to live with the attached strings–later to be called, chains. The strings always begin very tenuously; but it must be remembered that what the government funds, it runs. Maybe not at first, but eventually with the government’s nickel comes a noose.

Baptist History is not without its blemishes and stains. Because of its independence, some peculiar people with peculiar teachings attached themselves to Baptist Churches and baptistic groups going back before Baptist was attached to a church name. The lack of a hierarchal organization without a “pope” required every single Baptist Church to police its own affairs. That system has worked rather well; after all, it is the biblical system.

Baptists have been the loudest voices for religious freedom and separation of church and state (although not separation of God and state) from the very beginning of this nation. Honest, informed historians credit Baptists for that reality.

L. W. Bacon, in A History of American Christianity, wrote of the Baptists: “….that we are chiefly indebted for the final triumph, in this country, of that principle of the separation of church and state, which is one of the largest contributions of the New World to civilization…” High praise indeed and well deserved from a Congregationalist and later Presbyterian!

Baptists are also responsible for the ten amendments to the Constitution, not only the first one! Cathcart tells us in his Centennial Offering that “Denominationally, no community asked for this change in the Constitution but the Baptists…The Baptists asked for it through Washington; the request commended itself to his judgment and to the generous soul of Madison; and to the Baptists, beyond a doubt, belongs the glory of engrafting its best articles on the noblest Constitution ever framed for the government of mankind.”

The separation of church and state was enshrined in the Bill of Rights in the U.S. Constitution because of a Baptist preacher named John Leland. The Bill of Rights is comparable to England’s Magna Carta signed in 1215.

The Constitution was approved in 1787 at the Philadelphia Convention and was sent to the states for ratification. Virginia was by far the largest and most politically powerful colony so there would be no Constitution without Virginia. Each Virginia County elected two members to the state ratifying convention. James Madison and James Gordon, Jr. were candidates from Orange County (and there were two other candidates opposed to the Constitution). Madison thought he was a sure winner. He was warned by his father and others that the Baptists had turned the citizens against the Constitution because it did not have a Bill of Rights. Madison headed home from New York through Philadelphia and stopped to spend a few hours with the Baptist preacher John Leland who was the major Baptist in Virginia and Orange County, the home also of Madison.

The Penn State Law Review declared that religious liberty concerns of Virginia Baptists, particularly the concerns of John Leland “…played a substantial role in James Madison’s elections to the Virginia ratifying convention in March of 1788 and to the First Congress in February of 1789. Those elections, in turn, were key events in the ratification of the Constitution and in the adoption of the Bill of Rights.”

Leland was a friend of James Madison, James Monroe, and Thomas Jefferson, and because of that relationship, he was asked to preach to Congress with President Jefferson in attendance in the House of Representatives. Pastor Leland met with Madison, a candidate to Virginia’s ratifying convention, to convince him of the need for a Bill of Rights to be added to the newly approved Constitution of the United States. Madison was lukewarm on the subject.

The preacher and politician, both Virginians, later met near Orange, Virginia, in what is known today as Leland–Madison Memorial Park. During that four-hour meeting, Leland was successful in extracting a commitment from Madison for his support of a Bill of Rights to the Constitution. During that meeting, it was understood that Leland would oppose Madison’s election if he did not commit to a Bill of Rights. Madison knew the Baptist pastor was very popular in his district and agreed to his request. (He also knew his party had been trounced in the previous election in Orange County.) Leland supported him strongly and the two pro-Constitution candidates won: Madison had 202 votes; his fellow candidate 187, and the two opposing candidates 56 and 34.

Madison kept his word when he went to Congress in the first congressional election in 1788, and America became the most unusual nation in the world: the first nation having a written Constitution that guaranteed freedom of religion, speech, press, assembly, etc.

America has a Bill of Rights because of a persistent pastor and a principled politician! This nation is short on both today.

Madison submitted twelve Constitutional amendments to the Congress about a month after Washington promised his help to the Baptists. Two amendments were rejected, but the ten amendments that became known as the Bill of Rights were approved on September 23, 1789, after much opposition. They were then submitted to the states for ratification.

The eleventh state had approved them by December 15, 1791. With this, America became a nation that guaranteed the people their God-given rights and limited the power of government, and we did it with a written Constitution and Bill of Rights - thanks to a Baptist preacher.

Historian of the Episcopal Church Dr. Hawks wrote in the Ecclesiastical Contributions: “The Baptists were the principal promoters of this work, and in truth aided more than any other denomination in its accomplishment.” Again, praise from a non-Baptist.

When Methodists, Presbyterians, Roman Catholics, etc., pass a Baptist church, they should doff their hats in respect and whisper a word of thanks for the freedom everyone is guaranteed because of our Baptist forefathers. Even non-Baptists agree that the Bill of Rights was a fantastic achievement in the annals of government.

The smallest Baptist church in America can swell with justified pride and appreciation of Baptist forefathers who believed in personal liberty for everyone–even the right to be wrong!

Now you know why Baptists are not Protestants, and why I’m a Baptist.