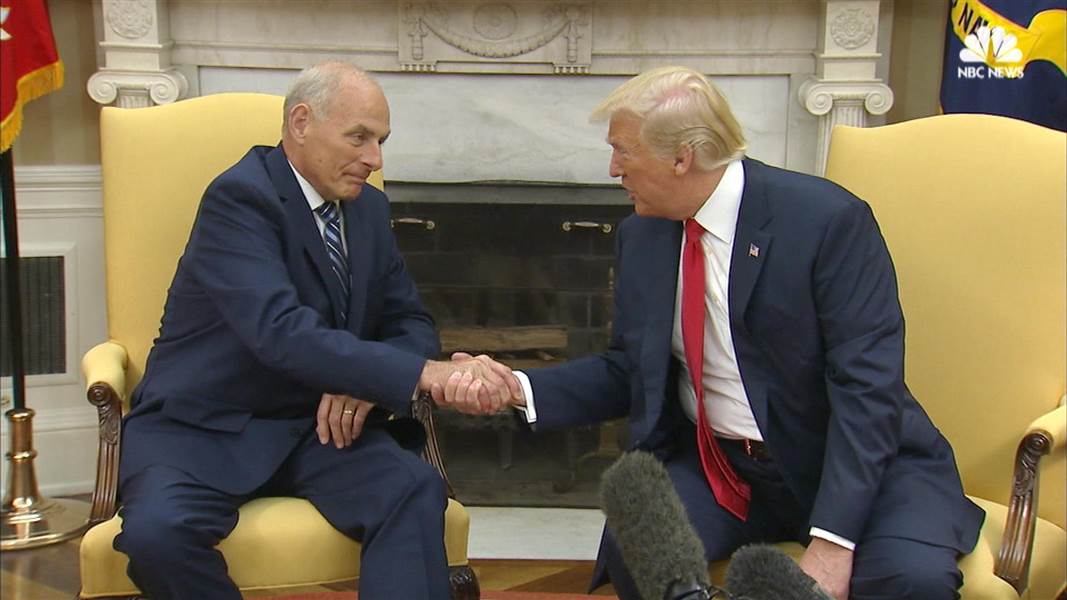 Thanks for making the choice between those who love America and those who would love to destroy it, so clear.

In the true spirit of what has always made America great, General John Kelly placed himself directly in front of the DNC Media's propaganda machine. And as with all those who place themselves on the firing line in the interest of truth and fairness, we should thank him.

Why should we thank him, beyond the obvious of his being a patriot and speaking the truth? We should thank him for having the courage to stand up to the insatiable Left-stream media who will twist any defense and support of America into some sham PC crime or faux racist comment.

The latest in the Left-stream’s unending series of 'outrages of the moment,' concerned Trump's phone call to a Gold Star widow - who, by the way, should be afforded all honors and respect. Even to the point where if she does not like or support the president she should have every right to refuse his phone call or feel it was in her opinion, not respectful enough. Her husband gave his life in service of our country and that is her right.

The problem was not in the feelings of a grieving widow but with a dedicated anti-Trump protester masquerading as a congresswoman purporting to represent all of the voters in her district. A leftist partisan who saw it as an opportunity to serve the DNC and her personal self-aggrandizing agenda by running to the lapdogs of the Left-stream press with allegations of Tump disrespect.

After watching the usual round of liberal feeding frenzy amp up their typical hysterical frothing, General John Kelly, himself a Gold Star father and veteran, firmly put the comments in context and the shameless self-promoting congresswoman in her place - which to borrow a line from Shakespeare, is as a person filled with “sound and fury, signifying nothing.”

The DNC media complex was not about to let a clear and concise voice of reason and service to America get away with making his voice heard.

Thus, since it was obviously difficult to bolster the dim comments of the Democrat self-described, "rock star", who eavesdropped on Trumps private conversation with a war widow, the DNC media tried, with their typical tortured logic, to make Kelly’s expression of disgust for the shameless congressional self-promoter, into something racial. How? They, of course, fell back to their default position by equating the term “empty barrel’ with racism.

The problem is, that if they are really as well educated as they so often claim, one presumes they might have heard of an ancient Greek philosopher called Plato. It was he, not John Kelly who said, "An empty vessel makes the loudest sound, so they that have the least wit are the greatest babblers.”

Does that mean that Plato was a racist?

Sadly, the term ‘racist’ itself, just like the once-shocking F-bomb, has been so over-used it has lost all value to shock or even call attention to something that might actually be racist. After all, when the Left labels everything racist or homophobic, from toothpaste to peanut butter, how can you separate the meaningful from the frivolous? Answer? You can't.

Ever since the sixties, it has become increasingly obvious that there are two forces struggling for the soul of the United States.

On the one side, we have those who believe that this is a country founded on the principle of liberty and conceived in the belief that all of its citizens should have equal opportunity to be the best that they can be. They envisioned a country dedicated to providing a haven and security from the oppression of dictators, powerful elites and mindless mobs of nihilists. For two centuries America was that beacon to people around the world who yearned for freedom and only asked for the opportunity to work hard and live free.

On the other side are those who through either ignorance, brainwashing, or lust for privilege and power feel they cannot succeed in their agenda of total control unless they curtail or totally strip away the freedom from all independent citizens who wish to live their lives with self-reliance and freedom.

Perhaps that is why that same once-proud word, “freedom”, is on its way to becoming a proscribed pejorative in the ever-expanding lexicon of politically-incorrect terms frowned upon by the PC fascists of the Left.

But this shouldn’t surprise anyone who has been paying attention to the Left’s unquenchable need to control every aspect of life and thought.

That is why they see the ‘traditional’ American spirit of self-reliance, love of country, and what used to be called ‘rugged individualism’, as anathema to their control-freak agenda. Like the Marxists and fascists before them, they cannot tolerate, or rather afford to tolerate, any freedom that would allow the individual to think for themselves. That might lead to questioning - and their dogma can never survive scrutiny and open debate.

No, in order to succeed they must have the means and power to stifle all forms of dissent.

Sadly, their total control of the Left-stream media, education, and the entertainment industries puts them well on their way to achieving that end.

That is why we need more General Kellys to counter the divisive rhetoric of the “empty barrels" of the DNC.

That is also why when someone stands up to the corrosive power of DNC controlled Left-stream media and propaganda machine, Americans, who still cherish the ideals of freedom upon which our country was founded, should likewise stand up and cheer.