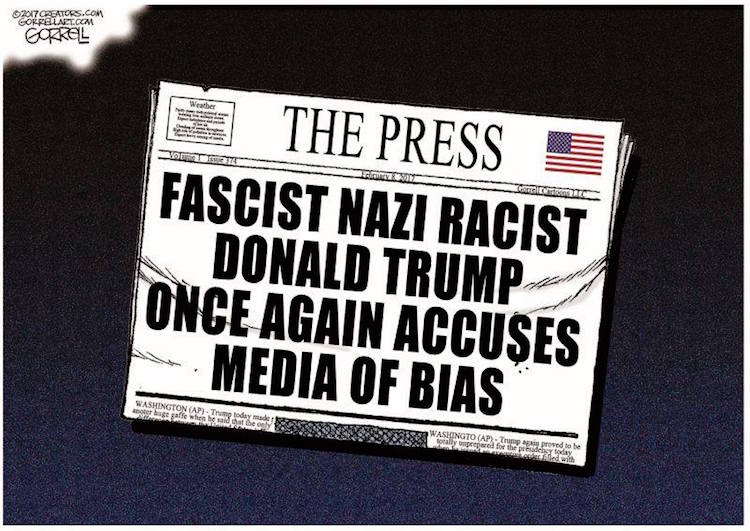 Now that the Left-stream/DNC media's anti-Trump campaign has been thoroughly discredited - will they change?

The long answer is also, "No!" And the simple reason is that they can’t afford to.

Along with the crowing about the recent election of two Dems in Blue states that voted for Hillary, the unending stream of biased news continues to flow unabated.

Why? Because even after being caught in lie after fabrication, to admit that they colluded with the Obama, Hillary and the DNC to prevent Trump’s election and then drive him from office would mean their end. They have moved too far to the left and have been too thoroughly co-opted - from reporters and journalists to partisan operatives - to ever go back.

Besides, they have nothing left to go back to.

Can you imagine what would happen to their ratings should they wake up tomorrow and say, “Hey folks, we’re really sorry for feeding you a line of leftist propaganda for the last 50 years and we’d like to go back to being impartial news reporters again?"

First, there is no one involved with the left-stream media who is even capable of doing straight news reporting or balanced commentary anymore. Even if they wanted to, they simply don't know how.

Secondly, and more importantly, they would lose the audience they have. And that is the real crux of the matter.

They have gone too far down the partisan road to turn back now. Over the past year, they have given up all pretense of being purveyors of news and have instead fully embraced the role that used to be filled by left-wing blogs and conspiracy theorists.

Let’s face it. Do you know anyone who watches or reads any of the Left-stream news, i.e.;  ABC, NBC, CBS, CNN, MSNBC, PBS, NYT, Washington Post, et al, and actually expect to get balanced news coverage?

Of course not. By now even the most naive among us have pretty well concluded that Fox is about the only choice you have as a conservative and everything else is basically an outlet of the DNC.

Thus, even if the Left-stream media should want to go back to reporting news, which barring a complete housecleaning of just about everyone who works there, they cannot - it would be impossible.

Because the divided nation that we have become over the eight years of Obama’s carefully executed ‘divide and conquer’ strategy has done its work. The Left-stream media has settled comfortably into the niche of the 40-plus percent of the country who hates Trump, freedom of thought and America in general.

So now, for better or worse, the Left-stream media and the Dems are inexorably bound together in a devil's bargain where they must continue to ramp up the false narrative if only to cover their past complicities in previous ones.

A prime example of this is the Donna Brazile book tour fiasco where we watch as each DNC talking point becomes enmeshed in the web of the revelation of each new deceit.

Besides, for the first time in a long while, their ratings are up.

“Look at us!” they crow. “Our anti-Trump narrative has increased our ratings since the elections.” While that may be true in the abstract, the real response to that statement should be; “As compared to what?”

For instance, while the once-respected CNN has increased their ratings, they still only have 922,000 primetime viewers when compared with numbers like 2,043,000 of their bitter rival, Fox News.

Thus while gathering in a share of the dedicated Trump haters, CNN has to split them up with competitors ABC, NBC, CBS, and especially the most successful of the left-wing alternative media, MSNBC, which has seen its total viewers climb to 1,582,000. It is still nowhere near Fox’s 2,258,000 share.

So then, why don’t some of the Left-Stream media try to move to the center and maybe pick off some more moderate viewers from Fox News?

It is because it can’t. Those who work there no longer see themselves as objective reporters. They see themselves as the story. They are the makers of news - the cultural warriors. Just witness the continual “Look at me!” grandstanding by CNN during the White House press briefings.

Want another example? Then take a look at the outrageous things the ersatz reporters say on their social media accounts. Violent, hate-filled rants calling for death, destruction, and curses on anything that does not conform to the leftist agenda.

These are people who no longer have the capacity to see anything from an impartial, rational, viewpoint. Instead, they have reverted to the mentality of a freshman in a college dorm - each of whom hopes to outdo the other by displaying how radical and incendiary they can be.

As the younger employees at these networks enter the industry without ever having heard a question or dissenting voice to challenge their monolithic leftist indoctrination, then so must the older ones keep moving constantly to the extreme left to keep their relevancy and their jobs. This closed cycle continues until the point is reached where radical left-wing propaganda becomes truth to them and they devolve into a party organ for the DNC. In other words, what we have right now.

Thus rather than have hope that we will see the Left-Stream Media recognize that they are preaching only to a limited choir and have but small chance of influencing anyone who is not already a radical anti-Trump activist, they will continue to double-down on their rhetoric, moving further and further to the left.

In fact, the entire entertainment industry has now become one interchangeable, amorphous mass of hate - where news, late-night comics, Hollywood and even sports, all read from the same tired script of shrill, phony outrage.

Can they ever change? It is unlikely. Most have passed the point of no return and others have nothing to change back to. More importantly, they have no desire to.

Barring receiving new marching orders from the rich and famous at the top of their social pyramid, the Left-Stream Media/Entertainment complex is comfortably locked into their narrow mindset.

What about those of us who have been able to escape the “Trump Derangement Syndrome”, and would occasionally like to be informed or entertained without the shrill rants of leftist propaganda?

Well, first of all, there is Fox for news. Yes, I know it’s not perfect but compared to all the rest, it’s the best we’ve got. We also have talk radio for intelligent conversation and an outlet for the stories the Left-Stream tries to suppress.

There are also many sports without over-paid and pampered players, who still play for the love of the game and don’t 'take a knee’ to protest the country that made them millionaires.

And as for movies, TV and late night ‘comedy’ shows…? Well, I suggest a good book. Or turn off social media and spend time with family and friends.

And oh, yes - occasionally a long walk in the beautiful fresh air with no media at all.