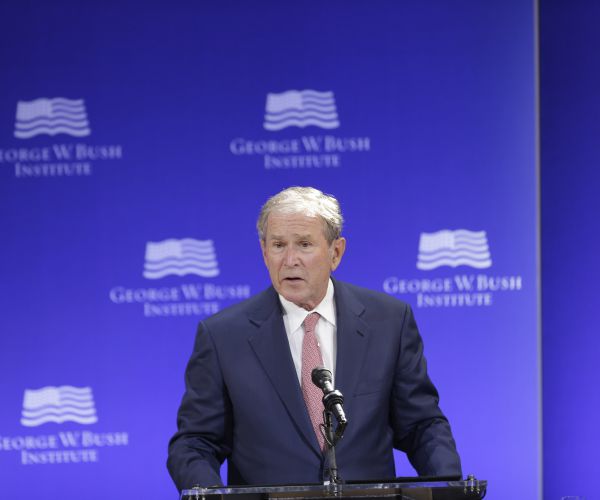 Given the unanticipated election of Donald Trump (now a year past!), it's difficult to determine which establishment faction is more perturbed, liberals or old guard Republicans. Despite clear and unambiguous Clintonian corruption, neither “side” seems capable of respecting the democratic process when one of their own is not in the winner's circle. Thus, to them, the people's will—and, by extension, the fate of the nation be damned!

The childish cattiness that has resulted is expected of Democrats. They're myopically focused on reelection, but little else. What political party wouldn't be furious over losing over 1,000 officeholders during the Obama era - including, stingingly, the presidency? Yet, what's unseemly is for GOP stalwarts to publicly chastise their party's current standard bearer. For example, George W. Bush said, “This guy [Trump] doesn't know what it means to be president.” How's that not calling the kettle black? What happened to the generations-long tradition of remaining silent regarding one's presidential successors? Likewise, what of Ronald Reagan's Eleventh Commandment never to speak ill of another Republican? So much for honoring “the rules” of political discourse.

In truth, if Mr. Bush was going to “go there” he's waited eight years too long—and picked the wrong target. Recall, as a go-to excuse for Barack Obama's own multitude of failures, he conveniently “blamed Bush." Specifically, Mr. Obama called his predecessor's deficit spending “unpatriotic” and “irresponsible.” For that demonization, the younger Bush has reason to be incensed. Not at Trump, but at the Democrat's hypocrisy for running through almost twice as much as he: 4.9 versus 9.3 trillion. If that's not egregious enough, what of Mr. Obama's cash payment of 1.7 billion to the pro-terrorist Iranian regime? Why was “W” as silent as a church mouse when actual presidential mismanagement - and malfeasance - transpired? (Is his anti-Trump fervor sour grapes for thwarting his brother Jeb's presidential prospects?)

As was widely reported, shockingly 41 voted for Hillary Clinton, and 43 voted for “none of the above.” How out of sync can two former Republican presidents be? In a recent speech “W” obtusely said, “At times, it can seem like the forces pulling us apart are stronger than the forces binding us together.” With their polarizing rhetoric on full display, isn't the Bush clan doing precisely that? Furthermore, doesn't their brand of divisiveness have the same negative impact as that of any progressive?

Naturally, the Bushes are free to squawk, and uselessly wring their hands. So, too, is the rest of the unsettled GOP establishment. However, piling on is a fool's errand that only makes matters worse. After all, thanks to the hard left MSM, untruths and distortions about Trump already run rampant. And unlike either Bush, at least President Trump has the courage to fight back against these false narratives rather than “dignifyingly” taking them. (Defeated Mitt Romney epitomized that failed philosophy.)

That both former presidents surnamed Bush would now speak out against a sitting president shows disdain for established decorum, and the voice of the electorate. With the nation coming apart at the seams during the disastrous Obama years, they collectively made not a peep. Apparently, for these beltway blue bloods, unjustly trashing Trump is a favorite pastime. That the Bushes partake shows their loyalties truly lie with the insulated political class (regardless of party affiliation) rather than with the voters. Moreover, as their sentiments are indistinguishable from that of Democrats, party labels are rendered meaningless. Herein, to any clear-thinking person is proof of the necessity of electing Donald Trump. The political pendulum has indeed swung far away from dynastic families—and, in 2016, an entitled insider. That maddening reality—as much as the brash billionaire himself—is deliciously driving the D.C. ruling elite daffy.