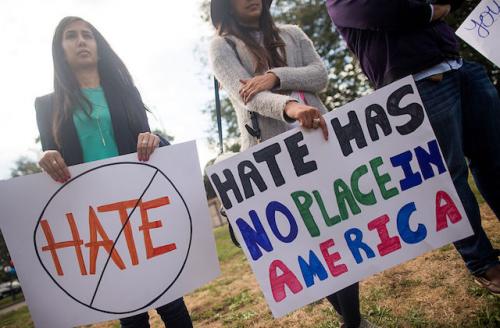 In the “Hobbit” J.R.R. Tolkien wrote “It cannot be seen, cannot be felt, cannot be heard, and cannot be smelt. It hides behind stars and under hills, and empty holes it fills. It comes first and follows after, ends life, kills laughter.”

I’m going to take liberties here and theorize the author was writing about darkness. Not the dark that comes with nightfall, which in itself can be quite beautiful. Tolkien I believe was referring to the darkness of the soul, a breeding ground for hate. What most of us don’t realize is that those who hate can suffer debilitating consequences that can consume their lives, by corrupting their minds, defiling their spirit, and weakening their inner strength and life force, while the object of that hate, if not confronted, might not even be aware of it and goes about his or her life without regret or hurt feelings.

But what causes hate? Again, I’m going to theorize here that in some cases hate is a manifestation of one or more of the seven deadly sins: pride, greed, lust, envy, gluttony, wrath, and slothfulness; some might also include vainglory and acedia, (spiritual apathy). These sins are what we can consider abuses of our passions and natural state of being. Of course today we can include religion and ideology as catalysts in fomenting hatred.

Since the beginning of this nation, there has always been division of one sort or another among the American people. The original “Great Melting Pot”, a mixture of ethnicities and religions often had different beliefs and opinions.  Sometimes we scream and shout at one another to vent our frustrations and disagreements. But over the past several decades, something has drastically changed in the way we think and communicate, and not for the better.

The level of hate, anger, and bitterness has increased to a degree that diminishes us all as Americans, and can lead to character assassination, bigotry, the destruction of property, denying freedom of speech, physical harm, and even death. Not that this is only a product of post-modern times, for history reveals otherwise. But it seems we have become much more callous, indifferent, and disrespectful of one another’s beliefs and opinions. Acrimony and vile rhetoric have reached a fevered pitch in the media, academia, the political class, the entertainment industry, and among the people.

There have been moments in history when things changed, for good or bad. In some instances the time, place and the particular event that preceded the change was uncertain, all that was known was that things were different, and life went on. But then there were specific events, like the Lusitania, Pearl Harbor, September 11, that were the precursors of a rise in hate that we could pinpoint, and that led to civil unrest and war.
Hate has always existed, going as far back as the biblical brothers Cain and Abel. Within recent times, it seems to have been greatly exacerbated in the people. This begs the question, when did this all begin? The answer I believe is twofold; the exact times, places and events that fomented this greater degree of hate and were the genesis of the current state of this darkness of the soul are clear.

Let’s begin on Tuesday, June 16, 2015, at about 11:20AM Eastern Time, when Donald Trump, accompanied by his wife and future First Lady Melania descended like a monarch in his Trump Tower castle, waving and smiling, as the modern conveyance delivered him to the cheers and jeers of the assembled. On that day the American people came to know more intimately the builder and real estate mogul who was now running as a presidential candidate. The future president stood before the people, from his golden tower, and spoke of issues that caused many to applaud and others to react with outrage and accusations of one sort or another.

Many in America and the media especially, treated Mr. Trump’s ambition with derision, something to scoff at and ridicule. At the time few if any believed he would ever go the distance in campaigning, in what is an arduous, and at times uncivil and extremely difficult undertaking. But he persevered and withstood all the slings and arrows of the establishment, the swamp, the 'deep state,' and an embittered hostile media. Even though bombastic, sometimes overbearing, and to some vulgar, he stood before cheering crowds and let them know he would bring change, and 'make America great again.'

Mr. Trump endeared himself to the people, especially the white working class in Middle America, and they responded to his clarion call and elected him president. And then it all came to a head, at the second phase of the hate train, on the morning of November 09, 2016 at about 3:00AM eastern time, America was shaken to its very foundations and the world for many was turned upside down.

President Trump represents to his detractors, not only a complete reversal of the policies and positions of the last administration, but also his beliefs and behavior are antithetical to their very existence. They have developed a bitterness and what seems unbridled hated for Mr. Trump, and will do all in their power to impeach him and destroy his presidency.

Anton Chekhov once wrote, “Love, friendship, respect, will never unite people as much as a common hatred for something.” Say and think what you will, it is regrettable that things have to be this way and that hate is rampant in America. It appears rationality and civility finds no favor in a culture corrupted by petty indifference, a lack of propriety, and personal animus. I believe we can all agree, even his supporters, the president should take a deep breath, a step back, and consider his priorities when speaking extemporaneously, or engaging and communicating on social media. However we would all do well to do the same ourselves, and join with the president and reduce the degree of rhetoric.