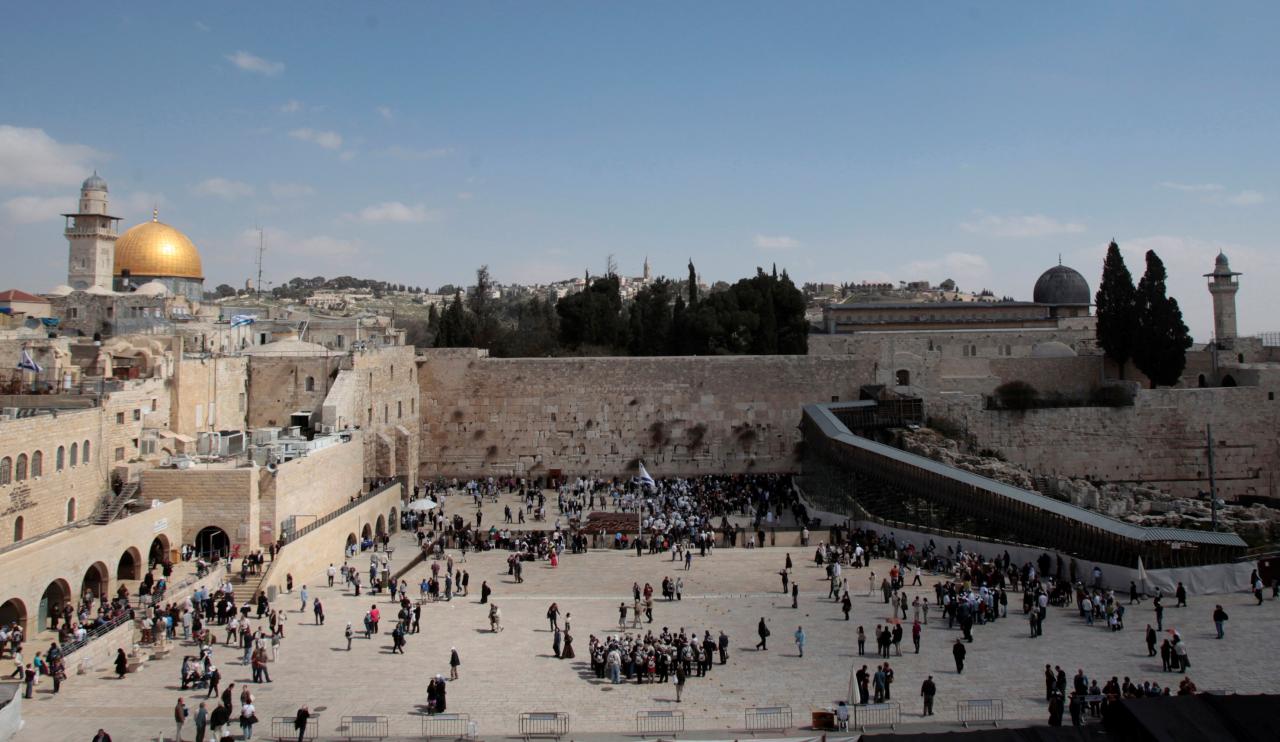 Jerusalem today is a city of 870,000 citizens, including 37-percent Muslim-Arabs - although not one Jew is permitted in Mecca, Saudi Arabia! In 1995, Congress passed a bill that allowed the U.S. to recognize Jerusalem as the capital and move our embassy from Tel Aviv to the Holy City. However, that has not happened because the law permitted the president to delay the move for national security reasons. Every president since then has been too cowardly to do the right thing. They are fearful of antagonizing radical Muslims.
Since passage of that law, as American presidents have “kicked the can down the road,” they also kicked the Jewish nation down the road. But then, the Jew has been the whipping boy of the world for thousands of years.
The whole world knows Jerusalem has been the capital of Israel since King David, who began as a singer/shepherd ending as a soldier/sovereign, captured the city from the Jebusites in 1004, making it his capital. (By the way, where were all the “Palestinians” at that time?)
David, Israel’s greatest king, wrote in Psalm 122:6 “Pray for the peace of Jerusalem: they shall prosper that love thee.” However, Jerusalem has not known much peace since it has been attacked 52 times, captured and recaptured 44 times, besieged 23 times, and totally destroyed twice - by Nebuchadnezzar in 597 B.C. and by Titus of Rome in A.D. 70. The oldest part of the city was settled about 4000 B.C. according to archaeologists.

When the Jews were in their 70-year Babylonian captivity 500 miles from Jerusalem, their Temple destroyed, their sacrifices ceased, and their priests silent, they sat on the banks of the Euphrates River and wept as they remembered Zion. David quoted those captive Jews saying, “We hanged our harps upon the willows in the midst thereof…If I forget thee, O Jerusalem, let my right hand forget her cunning.” They had lost their song but not their salvation. And they remembered Jerusalem.
President Trump should keep his campaign promise and recognize Jerusalem as the undivided and eternal capital of Israel, thereby telling the Muslim world they will not drag East Jerusalem into their orbit.
Muslims have tried to use Israel in their struggle for a world caliphate. They have created a spurious history to make a claim to Jerusalem and Israel. However, they have no claim. Mohammed was never in Jerusalem and Jerusalem is not mentioned once in the Koran! Muslims use the claim that Jerusalem is one of their three sacred cities, Mecca, Medina, and Jerusalem, to give them bargaining power in the Palestinian problem. The key word is power.
Note their desperate ploy.

The Koran says, “Glory to (Allah) who did take his servant for a journey by night from the Sacred Mosque to the farthest mosque.” (Sura 17:1.) That was Mohammed’s famous “night journey” in A.D. 622 when he entered the “farthest mosque,” prayed and ascended to Heaven. Muslims declare that that sura teaches that Mohammed was taken by his flying steed to Jerusalem - the farthest mosque.

We have a problem. There was no mosque in Jerusalem at that time! It was A.D. 691 when Muslims built the Dome of the Rock over the spot where the Jewish Temple had stood before being destroyed by Titus in A.D. 70! Mohammed was long dead by the time the mosque was built.

Mohammed died ten years following his non-existent journey of 766 miles from Mecca to Jerusalem with a side trip to Heaven, where he did not speak with famous Bible persons and did not return to Mecca the next morning. On the spot where the mosque was later built, there was a garbage dump. From a garbage dump to Heaven in a single bound!
Sputtering, stuttering, and stumbling Muslims, knowing the story doesn’t work, suggest that it was a dream; however, their scholars clearly declare that it was not a dream but reality.
This alleged journey to Jerusalem is an attempt to give Mohammed some credibility as a prophet that history does not support. It permits Muslims to say, “Hey, Jerusalem is holy to us as well as to Jews and Christians since Mohammed rode up there one night.” Citizens of Mecca ridiculed Mohammed about his one-day trip to Jerusalem since they knew it took a month to ride there and back.
This is one of the first examples of fake news. It didn’t happen.

It is the epitome of me-too-ism. Muslims hope to lay claim to Jerusalem along with Jews and Christians. Even Aisha, his favorite wife declared that he did not make a literal journey. She should know.

Radical Muslims demand that East Jerusalem be turned over to them as their capital of a Palestinian state that would include Judea and Samaria. However, the Jewish leaders can’t be that stupid. But then, they have agreed to a two-state solution with a “Palestinian” state alongside Israel! Of course, Israel would have to surrender East Jerusalem and all of Judea and Samaria originally conquered by Joshua in 1400 B.C. Why would sane Israelis agree to give up their own homeland for a promise of peace from people who have callously, constantly, and consistently threatened to drive them into the sea?
Furthermore, with the “Palestinians'” history of terror, intrigue, and peace-breaking, why would Jews trade their land (at one place only nine miles wide from the West Bank to the Mediterranean Sea!) for a nebulous peace? Additionally, why is Israel, who won the Six-Day War, negotiating with the enemy? The victor normally dictates the terms. It is also unusual for a victorious nation to give back land taken in a war, especially in a war not of their making!
Furthermore, when Israel (seeking peace) permitted Hamas in 2005 to have Gaza, Muslim terrorists launched thousands of rockets into Israel. That trade of land for peace sure didn’t work then, so why now? One reason may be that Israelis are simply tired of living under the threat of constant attack. Another reason is leftists in the Knesset.
Muslims believe that when Islam conquers a nation, that nation forever must be controlled by Islam; so Muslims think they have a right to return to any land they ever conquered and must re-conquer it. The first hijra conquered Jerusalem in 638, so Islam “owns” Jerusalem and has a right, even an obligation, to retake it.
Ergo, Jerusalem is sacred to Muslims and must never become Israel’s capital.
The prophecy in Zechariah 12:3 is being proved true at this hour as Jerusalem is the major point of contention. “And in that day will I make Jerusalem a burdensome stone for all people: all that burden themselves with it shall be cut in pieces, though all the people of the earth be gathered together against it.”

Jerusalem has been the Jewish capital for about 3,000 years and it is time for Prime Minister Benjamin Netanyahu to say “no” to land for peace and to say it from their capital city of Jerusalem with the American Ambassador David M. Friedman standing beside him.
It’s also time for President Trump to stop kicking the can down the road do the right thing: realize that a nation has the right to decide on its own capital. In fact, it is asinine, arrogant, and addlebrained to do otherwise.
Copyright ©2017
Read more by Don Boys, PhD
Tweet