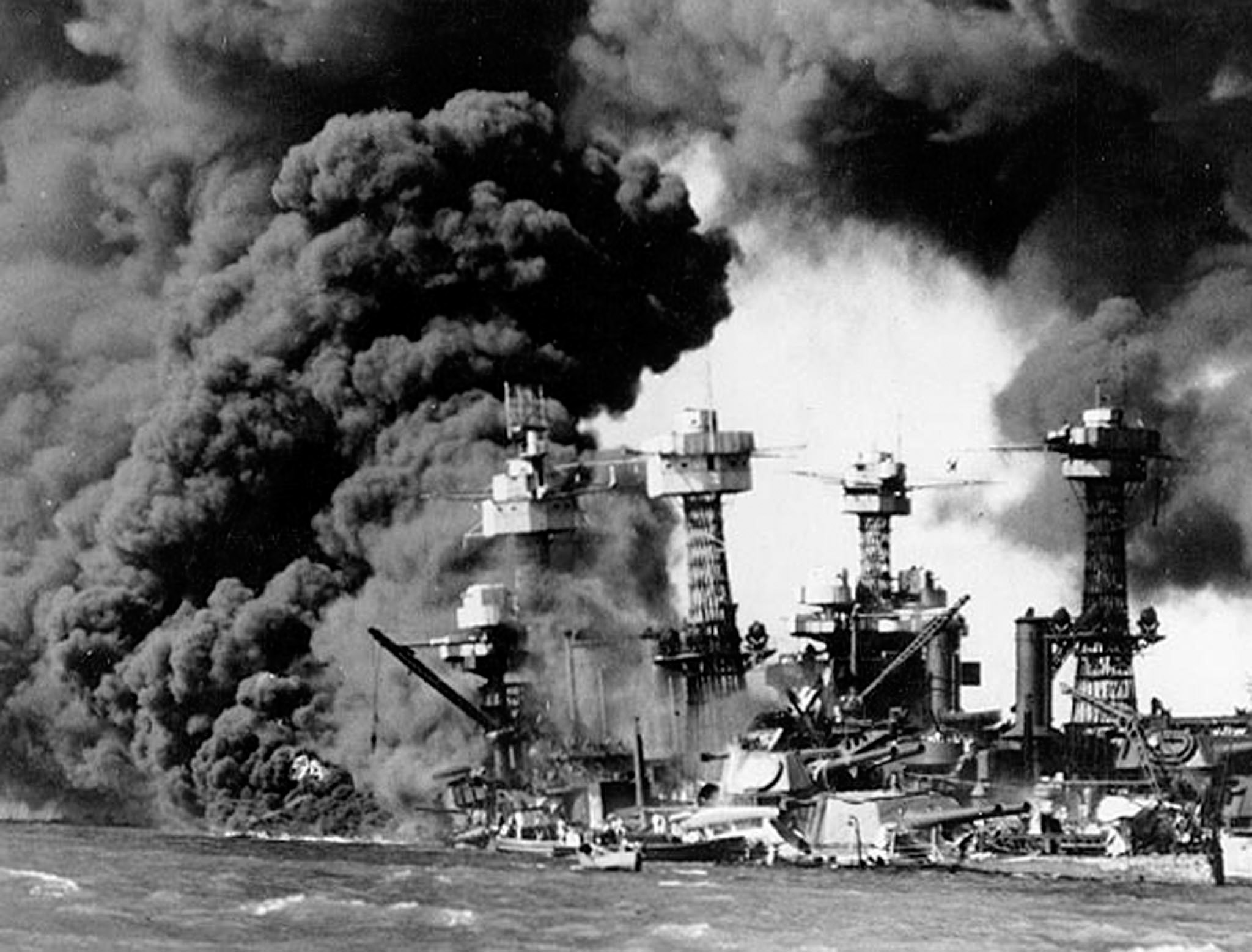 The Imperial Japanese Navy attacked the U.S. Naval Base at Pearl Harbor, near Honolulu, Hawaii, on Dec. 7,
1941, at 7:48 a.m. Hawaiian time. The surprise attack lasted two hours - two hours that “will live in infamy.” The base was attacked by 353 fighter planes, bombers, and torpedo planes in two waves that were launched from six aircraft carriers. Eight U.S. Navy battleships were damaged and four were sunk, and 188 U.S. aircraft were destroyed; 2,403 Americans were killed and 1,178 others were wounded. All battleships except the USS Arizona were later raised, and six were returned to service and went on to fight in the war.
Within seven hours, the Japanese Navy made coordinated attacks on Guam, Philippines, Wake Island, Malaya, Singapore, and other locations. The world was burning as the light of freedom flickered all over the globe.

The USS West Virginia, known as “WeeVee” was moored next to the USS Tennessee and just ahead of the USS Arizona. The West Virginia was blasted with nine torpedoes resulting in extensive damage on her port side. She burned for thirty hours and sank in the harbor. The USS Oklahoma, just ahead of the West Virginia, was immediately sunk.
Jack Miller, Clifford Olds, Frank Kosa were on liberty from the West Virginia and spent Saturday night at the "Monkey Bar" in Pearl City. A barmaid took their picture with a cheap camera and offered it for sale but the three very young sailors refused to buy it. In the photo, Clifford Olds was smiling with his friends, a Camel cigarette between his fingers.
That photo was the last photo of Clifford Olds and within a few hours, he and two friends, Ronald Endicott and Buddy Costin would be in an airtight compartment with limited oxygen, little food, and be dead in sixteen days. The young sailor in the photo didn’t know that he was sixteen days from eternity.
Pearl Harbor was a nightmare with explosions continuing, men crying for help, oil burning on the water, ambulances whining in and out of the base. The top brass were fearful of another attack from an invading force so marines were stationed as guards at appropriate places.
It was late the next day when the West Virginia’s fires were extinguished and Marine guards were posted on the shoreline of Ford Island, next to "Battleship Row." The guards standing near the West Virginia wreckage heard “bang, bang” coming from the bow of the ship. The clanging could not always be heard because of the rescue crews and the abnormal noises from all the rescue and cleanup activity. WeeVee Marine Bugler Dick Fiske recalled, “When it was quiet you could hear it...bang, bang, then stop. Then bang, bang, pause. At first I thought it was a loose piece of rigging slapping against the hull." But it was three desperate men crying for help - help that would never come.
The Marine guards were horrified at knowing someone was still alive and trapped inside the wrecked hull. Everyone knew it was almost impossible to rescue them because the drills and torches would ignite the ever-present gasses. Also, the military brass had many other emergencies that demanded their attention, not the least was the possibility of an invasion. The Marines standing guard covered their ears. They were totally helpless which only added to their horror.
Following the revelation of the desperate and hopeless cries for help, no one wanted guard duty close to the dead ship and dying sailors. It was especially unnerving on quiet nights without the normal noise. The Marines would do anything to trade posts so they wouldn't have to hear the banging.
The banging went on until it stopped on Christmas Eve - then silence.
In late spring 1942, Navy salvage teams finally started work on the West Virginia and found Olds, Endicott, and Costin sitting on the floor completely surrounded by water, 40 feet down. Batteries, food wrappers, etc., were scattered around the compartment. They also noticed a calendar marked with large Xs with the last one on Dec. 23. Members of the salvage team wept as they surveyed the tragedy. The other dead at Pearl died terrible but fast deaths; but these three helpless, hopeless, and hapless men took sixteen days to die.
The military authorities told their families these sailors were killed in “the war in the Pacific.” Many years later, family members of the three heard about their deaths but refused to inform the parents. All three tombstones list their deaths as taking place on December 7, 1941; however, they really died just before Christmas as Americans were buying toys, trees, and tinsel for a subdued Christmas celebration, all while the world was on fire.
These men are among the best representatives of the Greatest Generation, and part of the reason we are a free people.
Copyright ©2017
Read more by Don Boys, PhD
Tweet