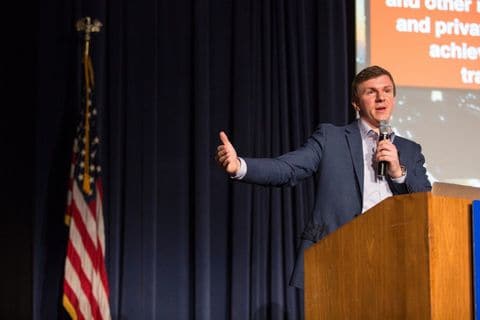 Did the Project Veritas Sting backfire? Or did it actually produce the best results for furthering the cause of the Truth?

This past week we heard the smug, self-satisfied leftists who masquerade as journalists, crow about finally catching the conservative investigative activist for Project Veritas, James O’Keefe, in a sting aimed at the Washington Post.

O’Keefe, whose nonprofit Project Veritas, has done several stings in the past, calling out liberal media bias at outlets like CNN and the New York Times, had allegedly sent a  woman to the Post with a scandalous story designed to pile on more dirt to candidate Roy Moore of Alabama.

According to the Washington Post, one of the paper's reporters received a message from a woman claiming that Moore had impregnated her when she was a teenager in the early 1990s when she was 15 and that it led to an abortion. The Post went on to say that the woman was seen entering the Project Veritas office, and that she nor O'Keefe would answer questions when approached by the paper's reporters. O’Keefe, in response,  said that he was preparing his own video story about the matter, including "hidden camera footage into [the] Washington Post.”

Ah…so has The Washington Post, that self-anointed beacon of ‘truth and justice,’ finally caught their enemy? Does this lucky catch mean that they have vanquished their nemesis once and for all? Does finally doing their journalist job by actually questioning a source mean that they are now free and clear to return to S.O.P. (standard operating procedure) of spinning the narrative to the point of fabrication?

That’s why the Left-stream DNC media may be rubbing their hands with glee prematurely.

They are crowing with triumph and giddy with glee, but what have they accomplished?

I submit that once the Leftists actually think about it, they will realize they may have won a small battle but lost a big war.

How did they uncover that the proffered story was, in fact, a designed sting?
They did their homework.

They finally did what real reporters and journalists used to do before they traded in their press credentials for a spot on the DNC PR Flack team - they checked their sources.

A half-century ago, no journalism student would have gotten a job without having that drummed into him or her.

That’s why the Left should really not be celebrating something that for most of the history of journalism, would and should, have gone unremarked.

Something so simple and basic as checking your sources and doing the bare minimum of research into whether or not a story is actually true.

In reality, rather than trumpeting this rare example of basic reporting, they should be embarrassed to point out (indirectly - as the irony is probably lost on them) that rather than doing what they usually do - accept any account, no matter how outrageous, that furthers their agenda - they actually acted liked journalists and decided to check it out. Wow! Kudos to you, W.P.

Now, if you could just maybe do that with the rest of the stories you write perhaps you could get back to what you used to be - journalists instead of staffers at the DNC.

Therefore rather than considering this a victory for the smug leftists, shouldn’t those of us who believe in straight reporting, honest journalism, and truth - rather than propaganda masquerading as news - celebrate?

That is why this may be a Pyrrhic victory for the left.

Suppose they learn the lesson from this incident that they really need to check their sources before printing a story?

Suppose they begin to feel uncomfortable when someone brings them a scoop that seems to be ‘made’ for their narrative?

Suppose they actually remember all those quaint little nuggets they learned back in journalism school about truth and honesty in reporting?

In the final analysis, all that Project Veritas was designed to do was to point out where the Left-stream media had abandoned its responsibility in favor of promoting an agenda. So if O’Keefe has accomplished this by making them act like journalists again, then what he has done has been a success for responsibility and the truth.

Isn't that all we wanted in the first place?