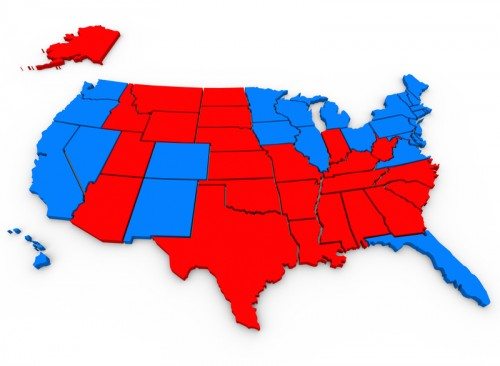 The Alabama win for Barack Obama’s candidate Doug Jones confirms our thesis that Obama is running the Democratic Party and the anti-Trump resistance. Obama, who recently compared President Trump to Hitler, recorded a robocall in support of the Alabama Democrat, calling him a “fighter for equality, for progress.” His notion of progress means suppressing the white vote and inciting black voters, who now believe by a margin of 72 percent that Trump should be impeached.

Reports indicate that Jones’ win was the result of a surge of Democrat voters statewide, “and specifically in African-American strongholds.” The grassroots of the Tea Party, evangelical Christians and conservative Catholics in Alabama couldn’t match the “Brown is the New White” strategy of Obama’s political strategist and operative Steve Phillips. Analyst Trevor Loudon discussed Phillips’ leftist background and association with Obama during his talk at our November 10 conference about Obama’s plan for a one-party socialist state.

We have studied Obama’s background, including his grooming by a hard-core communist, and his future plans, in our books, Comrade Obama Unmasked and Red Star Rising.

As America’s first Marxist president, his job isn’t done and he will not rest until a complete Marxist takeover is complete. His mentor, communist Frank Marshall Davis, taught Obama that blacks have a “reason to hate” white people. But other minorities and constituency groups will also have to be mobilized. Looking at what happened in both Virginia and Alabama, where the Republicans were defeated with Obama’s help, the former president’s return to Marxist power politics has to be seen as a development that could not only result in the Democratic Party taking control of Congress, but impeaching Trump.

Going forward, two black Democrats, Senators Kamala Harris and Cory Booker, have to be considered as presidential possibilities in 2020. Booker campaigned for Doug Jones and has praised the Phillips strategy of “increasing racial and cultural diversity” as the means to power. That means diluting and diminishing the white vote. What this entails, as conservative writer Vic Biorseth documents, is the socially-destructive political agenda of identity politics, in order to destroy the “original identity” of America, based on what used to be shared values and assimilation.

Booker has the added feature of appealing to the pothead vote, since he favors drug legalization on a nationwide basis. Sadly, there are literally millions of potheads in the U.S. today as  a result of Obama’s pro-marijuana policies. He ordered his Attorney General Eric Holder to let the states legalize and market drugs in defiance of federal anti-drug laws.

According to government statistics, marijuana is the most commonly used illicit drug. The estimate is that 22.2 million people have used it in the past month. Assuming they can be mobilized and directed to the polls, the stoners are a potential major voting bloc.

As ridiculous as it may seem, the use of drugs in the “fundamental transformaton” of America should not be downplayed. Obama, a member of the marijuana-smoking “Choom Gang,” was the perfect politician to carry out the plan of hedge fund billionaire George Soros to turn America into a virtual narco-state. The next step, as Tina Trent outlined at our November 10 conference, is access to LSD and other mind-bending drugs, marketed as “medicine.” Heroin injection centers are being planned for liberal Seattle.

Many of the stoned voters are “progressive whites,” products of the Marxist 'Madrassas' called colleges and universities. They damage their brains with drugs, graduate with useless degrees and big debt, and become cannon fodder for the revolution. The University of Maryland’s upcoming  “Trans(form)ing Queer” conference is another example of this trend. One topic, “Sex work and sexual economies,” suggests another constituency group for the Democratic Party – prostitutes. There is really no end to mobilizing disaffected and alienated groups of people for special recognition and benefits.

Having conquered Alabama, they are targeting Georgia and Texas. In fact, left-wing journalist John Nichols has written an article, “Can Our Revolution Build a Blue Texas?,” explaining how a “Revolutionize Texas” campaign can change the political nature of this Republican state.

If students at major Texas universities are giving a black communist a sympathetic or adoring reception, you know that “Red State” Texas may be turning not only blue but into a kind of “red” that conservative Republicans may not anticipate.

Remember that Trump won Texas in the 2016 presidential race by only nine points. He had won Alabama by about 28 points.

It seems clear that since Trump’s amazing victory, Obama has outsmarted Stephen Bannon and the Republican Party every step of the way.

Alarmed by political developments, former Republican House Speaker and Fox News contributor Newt Gingrich says the GOP is on the “edge of disaster” and that avoiding a Democratic wave election in 2018 “requires action now.”

But it may be too late for a strategy to derail Special Counsel Robert S. Mueller’s campaign to impeach Trump by charging him with obstruction of justice. Gingrich had praised Mueller’s appointment but now questions his fairness.

The new Gingrich book is titled Understanding Trump. It’s too bad he didn’t understand what Mueller was up to. Obama and his comrades in the Department of Justice surely do.