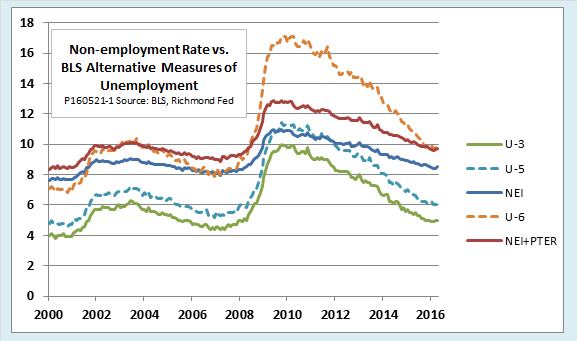 For a decade or so, we conservatives had been like the town criers. Every time new employment numbers emerged we would cry out that despite what we all see, read, and hear from the left wing media, all was not well. Throughout the entirety of the Obama reign, virtually everyone right of center – yes, even those establishment Republicans, would rightly claim that Obama’s unemployment figures were bogus.
And they were. Despite all other dreadful economic indicators, save for the phony Wall Street numbers, the unemployment rate continued to drop throughout Obama’s time. We on the right knew these numbers did not tell the true story, as the government was using the “official” unemployment calculator known as U-3.
This, as many know, does not give an accurate picture of real unemployment in this country. For years we have insisted that the more accurate U-6 data be used, as it takes into account not only short term unemployed, but also long-termed unemployed, discouraged workers who have just given up, and the underemployed, who wish to work full time yet can only find part time employment. This is the number conservatives insisted be reflected during the Obama years.
But then something odd happened after President Trump took office.
To be sure, the President has done an outstanding job in the course of just his first year. Far better than most on the right predicted - me included. He’s made a believer of me thus far. However, one thing is bothersome – unemployment.
The damage Obama had caused to employment in this country can’t be undone overnight. We all know this. It will take years to undo his disastrous policies.
Yet, as the unemployment rate continues to drop during Trump’s first year, are some on the right being consistent? It’s kinda looking like "No – no they’re not."
Investors Business Daily, whom I often quote as being consistently on the right side of logic, recently touted the latest unemployment figures in a piece entitled, “Don't Look Now, But Minority Unemployment Is At Record Lows Under Trump.”
They got the information from the latest Bureau of Labor Statistics (BLS) data released Friday, January 5, 2018.
While many on the right are trumpeting that the overall unemployment rate is now down to 4.1%, IBD goes a step further, breaking it down by ethnic group.
They write that, “the most interesting part of the jobs report, which goes almost unnoticed by the media, is that it's not just a few groups seeing more jobs and opportunity — it's broad-based, with minorities, women, men, and even those with low incomes, showing the best gains. And that's still true this month. But it's especially true for minorities.”
This, in itself, is not unfair, as there does actually appear to be gains in all sectors. What is unfair and inconsistent is that the BLS numbers are the same bogus U-3 numbers used during previous administrations which do not tell the whole story. We on the right had no problem calling out the spurious U-3 data just a year or so ago, yet all of a sudden it’s now okay? And worse, I haven’t heard a single soul on the right explain why it’s all of a sudden okay.
The standard rule of the thumb is that the U-6 number is approximately double what the U-3 number is. The real unemployment rate (U-6) is currently 8.1%, which means the black unemployment rate is closer to 14%, rather than the 6.8% that IBD published, and the Hispanic rate is around 9% - not 4.9%. All have improved, but are hardly approaching full employment as the U-3 numbers would have us believe.
Now, I can’t blame some on the right like IBD, that I love and read daily, for publishing this. After all, it would look pretty odd and pretty awful if we just started using the U-6 data without explanation. It would appear to the general public that the Trump economic plan was tanking big time. I get that.
But we on the right are not just (or should not be) here to regurgitate the latest data because it makes our guy look good. Is this not why we dislike of the left? That it always and only comes down to politics – the truth be damned.
Rather we, at every opportunity, should be trying to educate the public, as well as disseminating good news. A well-informed electorate is the only chance we have at maintaining a majority and continuing to enact conservative policy.
Copyright ©2018
Read more by Brent Smith
Tweet