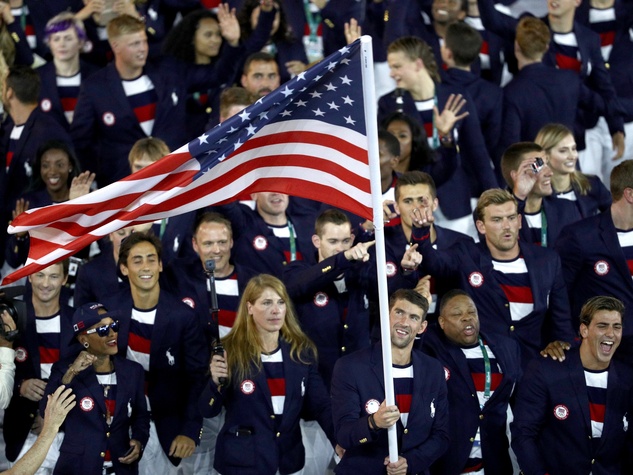 An open letter to our Olympic athletes:

You are about to accomplish an incredible achievement – the culmination of a lifetime ambition. You have worked in many cases since childhood with the simple yet extraordinarily intimidating goal of representing your country on the world stage. Few reach the pinnacle which you are about to attain.

I have personally known only one Olympian, and as outstanding of an athlete as she was, she did not medal. One Olympian. I have known a lot of people: politicians, actors, and television personalities; but only one Olympian. To become an Olympian is a rare achievement and you should be celebrated for your skills, your tenacity, your commitment.

We care about what you are doing because you represent us – all of us. You do not represent your state or college. You represent the United States of America.

Please remember the “united” aspect of our country’s name. You are not competing to remind us that there are certain divisions in America, rather you are performing to fulfill your dreams and to entertain the world. We do not care whether you are rich or poor, Democrat or Republican, intellectual or weak-minded. You are not on the world stage to enlighten or lecture us. We do not care about your politics.

Respect the flag: generations who died before your great-great-grandparents were thought of gave their lives for what that flag represents. You may have grandparents or great-grandparents who gave their lives in the 20th century to ensure that the world is free enough to continue with such games – or they may have ensured that your Olympic hosts are free from communism. Respect the flag – it represents your country, the greatest nation in the history of mankind.

Respect your uniform. The world will be watching you. You can win a gold medal and still come home a loser. The press will eat up any stupid acts you commit. Foolishness followed by shame has happened before; be exemplary citizens.

Adam Rippon, you are not the first male skater to have an attraction for other males. Get over your sexual politics, if just for a couple of weeks. We do not care about your personal life, just how you perform. If you win, we will cheer you, but if you succeed, the gold medal will not represent a victory for men who bed with men; it will represent a victory for your hard work and for the colors you wear on your uniform. If you do not care about meeting Vice President Mike Pence, keep it to yourself. We do not want you to be divisive when you are representing your country. Only your actions on the ice matter; not your thoughts off the ice. Save it until you get home.

While you are at it, Mr. Rippon, deliver the same message to your teammates, such as Nathan Chen and Lindsey Vonn. If we want to listen to ungrateful people who are successful in America, we will listen to professional athletes.

When you go to South Korea to compete, make us proud. Let us escape the political battles and the actions of rich, spoiled athletes and movie stars. Let us have the opportunity to enjoy the Games. Yes, if you achieve your dreams you will have the ability to act like ungrateful, spoiled children, if you would like. Or, you have the ability to act like appreciative, classy young adults, thrilled at what you have accomplished. Classy people receive the praises of all Americans; demagogues of only the percentage who agree with the diatribes.

I have a remote control. I will use it if you choose to be divisive and political. Oh, you can win without me watching, but I won’t be the only one to turn away, which means sponsors will make less money; thus, your post-Olympic sponsorship deals will be worth less.

You have a choice: you can go to the Olympics and represent your political views or you can represent the United States of America. If you choose the latter, an entire nation will cheer you on. If you choose the former, a few million will cheer. You will stain your own legacy out of a lack of discipline and disrespect for the country that allowed you to have such a great opportunity.

If you want to see what a nation looks like that has real problems, talk to the North Korean or Venezuelan athletes.

You will be wearing the Red, White, and Blue. We are pulling for you – if you allow us to do so. Win. Win for America. Win for yourself and your family. We want to be proud of you. We can be proud of you even if you don’t win, but not if you embarrass our colors – our nation – on the international stage.