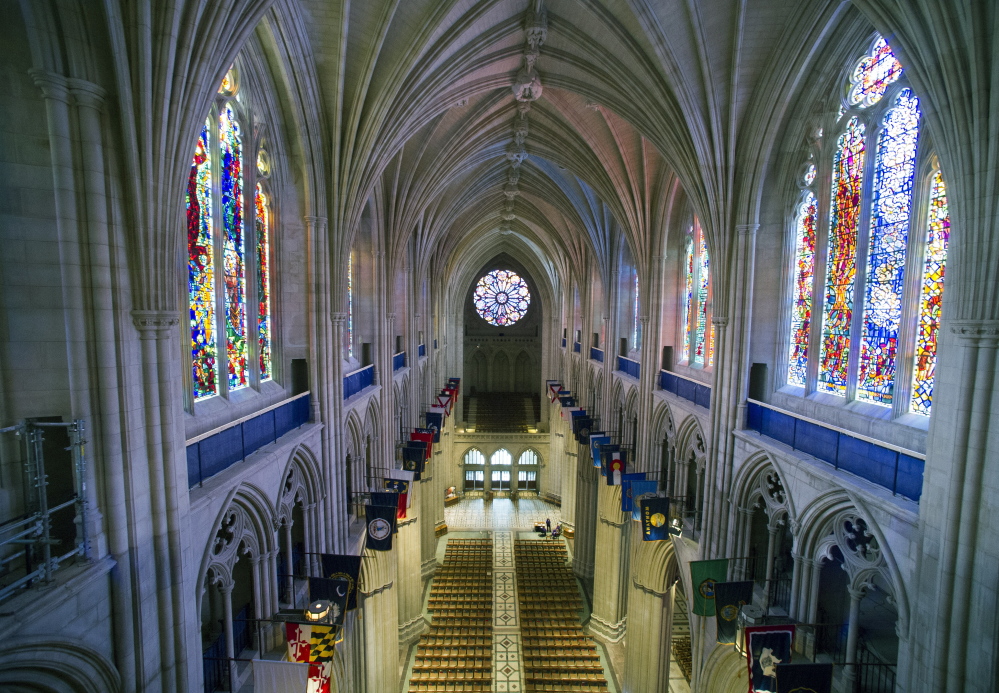 The National Cathedral in D.C. is a magnificent Gothic building but it is full of dead men’s bones. Christ’s comparable term was “whited (whitewashed) sepulcher.” The official name of the church is Cathedral Church of Saint Peter and Saint Paul in the City and Diocese of Washington, but I’m convinced Peter and Paul would not be welcome in their pulpit.
The cathedral’s website boasts that its purpose is “to serve as the spiritual home for the nation. The Cathedral is a national treasure and an architectural feat, a place of stunning beauty built to inspire.” No one asked me to vote on its being “the spiritual home for the nation.” It might be rude or even crude for me to remind my readers that the Episcopal Church was the major opponent of our War for Independence. More than half of their Colonial ministers left their pulpits in disagreement with our demand for a break with England.
A couple years ago, I wrote a column dealing with the Rev. Gary Hall’s leadership of the National Cathedral as Dean and I called it a nest of vipers. I did so because of Hall’s apostasy. Hall retired at the end of 2015 and my appellation is still true. His legacy lives on - a nest of vipers. It may be worse!
I wrote, “Hall is a religious rebel without a cause other than the cause of apostasy. He said, ‘No sex before marriage is not realistic.’ He did not try to prove that fornication was Biblical. He has even opened the cathedral for homosexual nuptials! He really jumped into a cauldron of confusion when he opined, ‘It is not only just OK to be gay, straight, bisexual, or transgendered. It is good to be that way because that is the way God has made you.’ Hall even invited a ‘transgendered priest’ to preach in his pulpit recently. Wonder if he would invite me to preach for him!”
In case you are wondering, he never did invite me, and neither did his successor. Maybe someday they will - when pigs learn to fly in formation and do backward somersaults over the White House, maybe.
Hall opined, “Every person is loved by God. We can preach that from the pulpit, but the most emphatic we can say it is to live it by uniting same-sex couples in marriage at the altar in our Cathedral.” Of course, God loves everyone, but He has revealed His parameters for sex in personal and family lives. Homosexuals are simply heterosexuals who refuse to accept His plan for their lives.
At least the church does in public what they teach because Bishop Mariann Edgar Budde and members of the Cathedral's LGBT ministry group, among others in the diocese, marched in the 2016 Capital Pride March “to honor the lesbian, gay, bisexual, and transgender community.” Hand me a barf bag.
While he was Dean at the church the Rev. Hall identified himself as a “non-theistic Christian," but that is a silly statement, not scholarly, and certainly not Scriptural. Hall continued to expose his heresy and rejection of Bible truth by saying, “Jesus didn’t try to convert. He just had people at his table.” The leader of a mainline denominational church, even a radical leftist one, should know that Christ said, “For the Son of man is come to seek and to save that which was lost.” Moreover, Christ told Nicodemus that he “must be born again” in order to enter Heaven. Of course, anyone can enter the National Cathedral and most other churches without that qualification.
Recently,The Daily Caller reported that the governing body of the Episcopalian Diocese of Washington, D.C., approved three very controversial measures: to adopt gender-neutral pronouns for God, to embrace transgenderism, and to promote open borders. They passed the three resolutions within an hour! More about that in another column. Could a thinking person suggest that such radical, unbiblical, and out-of-the-realm-of-common-sense actions be the reason the Episcopal Church is dying on the vine?

One Episcopal rector, Rev. Alex Dyer, put up banners suggesting the church was “a progressive church for a progressive city,” but more appropriately could be called “a dying church for a decadent city.”
The denomination displayed obvious signs of disintegration in 1974 when, despite objections of the denomination’s hierarchy, the church ordained eleven female deacons. It has been downhill ever since at a breakneck speed.

The denomination’s website says nothing about reaching people for Christ with the Gospel but it does boast about their activity on Ash Wednesday of going to the streets, not with Gospel literature, but to put ashes on the foreheads of people! However, there is no, absolutely no biblical foundation for such a church activity.
However, there is no Bible support for most of what is going on in mainline denominations: a church hierarchy, massive salaries, special clerical vestments, relics, and involvement in leftist political causes.
Copyright ©2018
Read more by Don Boys, PhD
Tweet