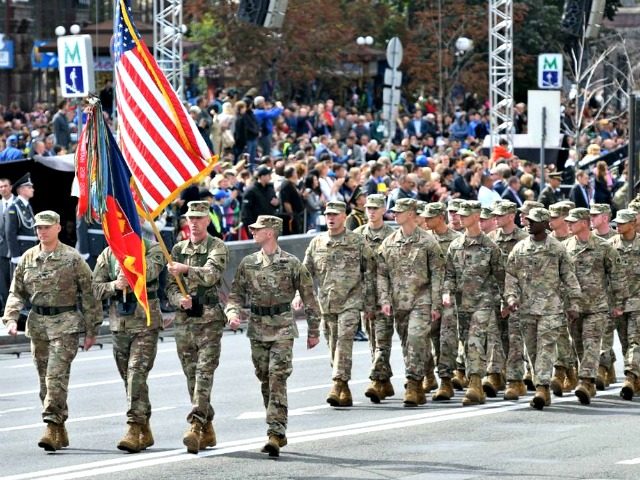 President Trump says he has an interest in a military parade in Washington D.C. sometime in the future. Fox Business reported on it.
“President Trump is incredibly supportive of America’s great service members who risk their lives every day to keep our country safe. He has asked the Department of Defense to explore a celebration at which all Americans can show their appreciation,” White House Press Secretary Sarah Huckabee Sanders said in a statement.
First, I don’t think it really serves any purpose. Those who love and respect the military already do, and show it as often as we can - and you’re not going to change the minds of leftists. Also, in my humble opinion – those who can’t fight, parade, those who can, don’t need to parade.
Personally, I hated wearing my dress uniforms. Heck, I don’t care for wearing a civilian suit. Most of our military are lunch-pail, fatigue wearing fighting men and women. They are not accustomed to goose-stepping down some city street like so many dancing monkeys, on display for their civilian overlords.
Now granted, there have been no details as to how subdued or grandiose the President wishes this event to be, but this is Trump we’re talking about - the guy with gold fixtures in the bathroom of his private jet, so I’m guessing he would opt for the grandiose, with little thought of the price tag.
And on that, I’ve heard that the cost of such a parade could be at least $20 million, up to far more than that. I’m going to guess far more.
“President George H. W. Bush’s military parade to commemorate the end of the Gulf War in June 1991, cost about $12 million, according to a C-Span report that year. That parade would have cost more than $21 million in 2018, after factoring for inflation.”
I’ll give that to them – celebrating the end of a war. We did it after World War I and WWII. Well worth it. I don’t think Reagan organized a parade after Granada though. Pity.
The idea of an American military parade came evidently from Trump’s attendance at the recent French military parade, where he was the guest of honor.
“The French march well. We fight well. Take your pick,” Lt. Col. Ralph Peters told FOX News. “If we really want to honor our troops and support them, pass the defense budget. Give them the tools and the funding they need.”
I have a friend that’s currently active duty, and he asked, “What about security – terrorism during the event?” He has a great point, which I said I hadn’t even considered. Imagine the optics worldwide if a bomb goes off on the parade route. Big bad America can’t even protect itself.
Obviously, this is fluff, as we know how big and bad we are, while busy protecting practically everyone on the planet while they parade around, but perception is huge.
Bottom line is that the time and effort spent planning and executing such an event would be better served in mission training. And the enormous cost is just something I could never condone, particularly as we are at this very moment being further sold down the river by Mitch McConnell and Chuck Schumer.
I just received a Freedom Works alert informing me that the two have a plan to add an additional $400 billion in spending.
Let’s save the money we don’t even have and skip the parade.
We all know that the President reveres the military. Maybe he could better show it by attending a few military graduation ceremonies - and not just Academy, but BUD/S or Boot Camp graduations. Now that would be cool!
Copyright ©2018
Read more by Brent Smith
Tweet