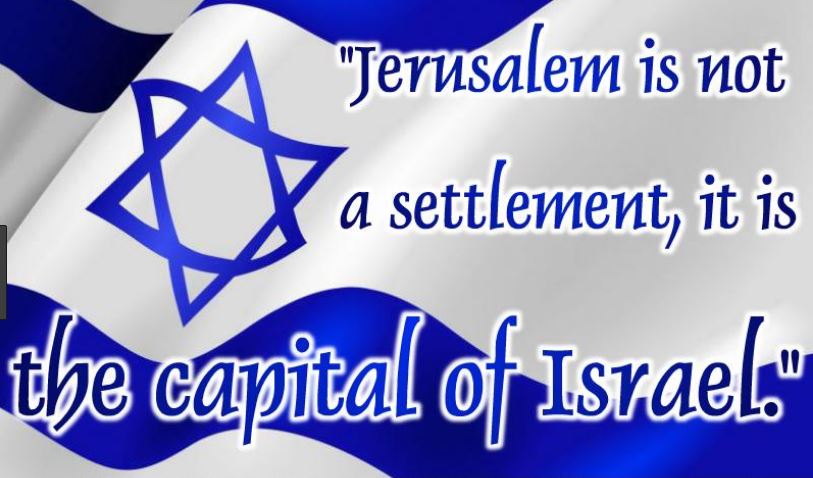 President Trump was asked, in an interview with Israel Hayom, “What was the highlight of your first year?” He said “I think Jerusalem…I wanted to make it clear that Jerusalem is the capital of Israel.” Presidents Bush, Clinton and Obama each promised to move the American Embassy to Jerusalem. They did not. The American Embassy will be in Jerusalem in 2019.

The United States is the major donor of United Nations Relief Work. The term refugee brings to mind people that are fleeing from war or disaster. However, 'Palestinian Refugee' is a misleading term that was created in the 1960s by Yasser Arafat. It referred to the Arabs that fled Israel during the 1948 war (who were refugees), and was expanded to include the children of Arabs that fled Israel during that war who were born in other countries and had never stepped foot in Israel.

King David ruled the Kingdom of Israel from Jerusalem 1,000 years before the birth of Christ. Over centuries that geography was ruled by Romans, Babylonians, Greeks, Ottomans, and others. After World War I - Britain, France, and Russian controlled the area. They created geographic boundaries which formed Syria, Lebanon, and Iraq. In the remaining area they partitioned the area where predominantly Arabs lived and called it Transjordan. In the area where predominantly Jews lived, the partition was called Palestine. Jews were not required to leave the Arab area of Transjordan, and Arabs were not required to leave the Jewish area of Palestine.

In 1948, the Jewish area of Palestine became the State of Israel. Surrounding Arab nations went to war against Israel. They did not want a Jewish state. During the war, many Arabs living in Israel fled to Arab countries. They planned to return after the war, when Israel was defeated. She was not defeated. Arabs that left Israel during the 1948 war are actual “Palestinian Refugees.” Today about 20,000 are living, and they are in their 70’s or older.

In 1967, Israel’s Arab neighbors again planned to drive her into the sea through war. Prior to the 1967 War, Gaza was part of Egypt; the West Bank was part of Jordan; and the Golan was part of Syria. Israel was victorious.  Israel won Gaza, the West Bank, and the Golan which expanded her size. Historically land won in war stays with the victor. (If geography won in war was returned after the war, America would belong to Britain.)

Yasser Arafat’s protégé, Mahmoud Abbas, is the leader of the Palestinian Authority. He claims that the land won from Egypt and from Jordon in 1967 belongs to “Palestinians.”  He posits that there are not 20,000 Palestinian refugees; but that there are 6 million Palestinian Refugees. Six million people receive “Palestinian Refugee Relief” from the United Nations. They are not fleeing war or disaster. They are deemed to be “refugees” because Arafat came up with the propaganda that the children of the Arabs that fled Israel in 1948 were Palestinian Refugees. The grandchildren and great-grandchildren of Arabs that left Israel in 1948 receive welfare money from the United Nations as refugees.

Schools teach “Palestinian children” that Jews stole their land, and thus they teach hatred of Jews. Indoctrination terrorist camps for children as young as 5 are common with videos showing instructions on hatred and killing of Jews. Many Palestinians are members of Hamas, an internationally recognized terrorist organization which vows the destruction of Israel. Palestinian Authority pays bounty reward money to families of terrorist suicide bombers who are called martyrs, not murderers. Last week a Palestinian teenager stabbed to death a rabbi who was waiting at a bus stop in Jerusalem.

Critics of President Trump assert that moving the American Embassy to Jerusalem will cause problems. Mahmoud Abbas bode that he would refuse to continue peace talks, if the American Embassy is in Jerusalem. “Peace Talks” have been ongoing since Camp David when Jimmy Carter was President and Yasser Arafat was the spokesman for the Palestinians. Every president and every Israeli leader since the 1970’s have participated in peace talks without success.

Ambassador John Bolton suggested that Egypt and Jordan could play a role in peace negotiations. As Mahmoud Abbas claims land that Israel won from those countries in 1967, belongs to Palestinians; that would seem a strategy to consider.

President Trump opined “…years of death, destruction, wealth gone and dissipated…people are tired of it. Both sides will need to make hard compromises to reach a peace agreement. But right now the Palestinians are not looking to make peace.”

Decades of peace talks have not brought peace. It is time to try a new strategy. President Trump is doing that. His first step was acknowledging that Jerusalem is the capital of Israel.