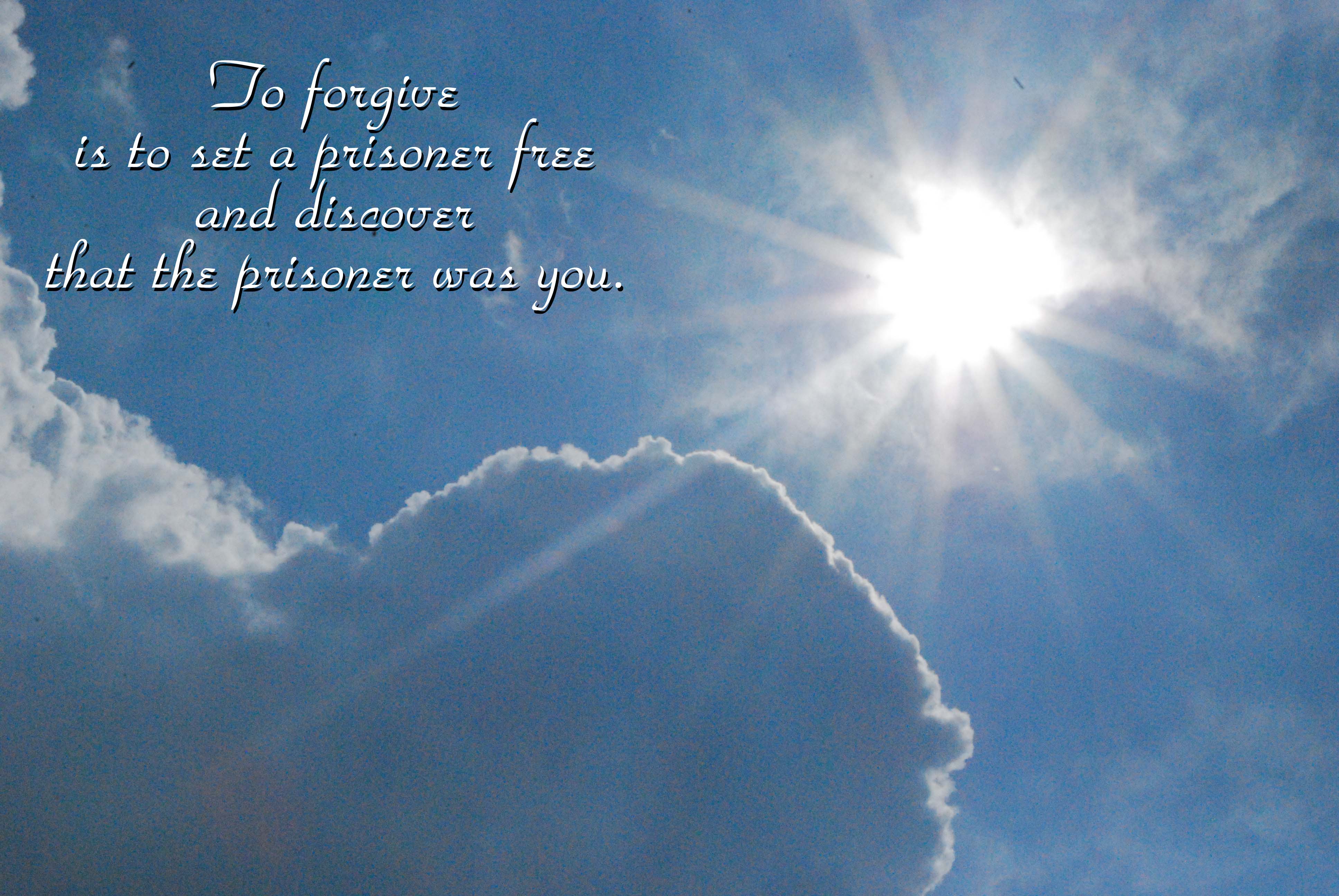 Allow me to start with a short story and then some quotes.
After all vigorous and brotherly and sisterly disagreement, our three children went to sleep only to be awakened by a terrific thunderstorm in the middle of the night. Hearing the noise upstairs, I called upstairs to see what was going on. A little voice answered, “We are all in the closet forgiving each other.”
“We are most like beasts when we kill. We are most like humans when we judge. We are most like God when we forgive.”

Forgiveness is not a work for the fainthearted. “Forgiveness is giving up all hope that the past will change.” It’s us allowing the voice in our head to be God’s voice, not ours.

Let me share a true event with you illustrating the power of forgiveness, reconciliation, and the third party who made this happen.
There is an amazing one-chapter epistle in the Bible entitled Philemon. Philemon’s name means 'profitable.' Philemon was known for his hospitality. Philemon was a wealthy man whose life was transformed by an encounter with Christ. He opened his heart to others. His house church was a place where you would hear incredible things, positive things and good things about God and others. His home was a place for refreshment, an oasis in the desert for many people. Philemon was also a good friend of the Apostle Paul.
As a wealthy man, he owned slaves. Please don’t be shallow and judge him for that. As the quote says above, you would be human for doing that. This is what they did in this time. It wasn’t right. But, watch how a networker sets things right in a world of wrong.
One of Philemon’s slaves was named Onesimus. His name means 'light.' Onesimus had a chance to escape from Philemon’s house and took it. Onesimus was now a slave to fear, capture, and most likely, a bad end. Runaway slaves didn’t usually have a long shelf life. There’s a lesson here. When we were are on the run from something we take what we are running from with us.
Look at how God steps in to this precarious predicament. God leads Onesimus to the Apostle Paul while Paul was in prison. A jail was the last thing that Onesimus would want to be around. But God works amazing ways. Paul meets Onesimus and Onesimus becomes a real Christian. He becomes one of Paul’s greatest helpers while Paul was in prison. So, here is Onesimus, serving another but this time by choice. He was a faithful and valuable servant not a slave.
Eventually, Onesimus informs Paul of his status. He is a slave on the run from Philemon. Imagine this! Paul knew Philemon. What happens next is reconciliation and networking at it’s best. Paul sends Onesimus back to Philemon’s house with a letter (the book of Philemon) encouraging reconciliation and forgiveness, not judgment. Can you imagine how Onesimus felt? He was going back to the past to release his future.
Paul’s letter explains Onesimus now has a different relationship with Philemon. They are not in a master/slave relationship anymore. They are now brothers in Christ, equal peers in heaven. Paul encourages Philemon to forgive and be reconciled to Onesimus. Then Paul requests Philemon send Onesimus back to Paul because he is such a great worker and partner in the cause of Christ. Paul goes on to say, “If Onesimus owes you anything, I will repay it.” Then Paul says, “Also, make a room for me Philemon…I’m coming to your house when I get out of jail.”
What Paul is saying to Philemon is, “You encourage everyone else, now encourage me by setting the captive free.” This is what happens when you hang around Paul. Changed lives, change lives. You can’t do that in the power of the human will. It takes God’s power to do that.
Let me ask you a question. Onesimus was running from something. Are you running from something? Maybe it’s time to go back and make the relationship right, the wrong right, pay back the money you owe or at least try. The truth is you don’t escape from what you are running from. You just take it with you until you get set free from it.
There’s an Easter story after the Easter story. Like Jesus, Onesimus rose from his tomb of slavery and death. He entered the new space of a free man, destined for the throne. How? Though reconciliation and networking.
Ed Delph    March 26, 2018    CCC
Copyright ©2018
Read more by Ed Delph
Tweet