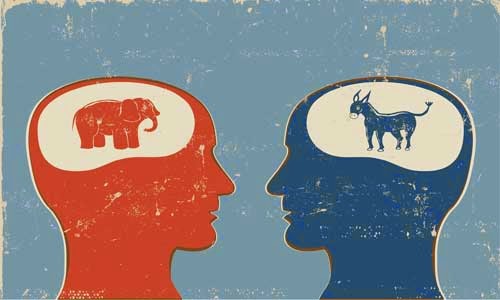 We are divided in America, on countless fronts, in myriad ways, for various reasons. We are so polarized, some believe we are headed for another civil war. I wouldn't rule that out, myself, at least the possibility - it gets very ugly at times. I hope it does not come to that. Armed conflict is horrible and messy and destructive.

The following discussion took place on Facebook, in response to a video statement by Liz Wheeler on One America News concerning the "March for our Lives" last week. The comments are between me and a friend whom I have known since 1970 - 48 years now. We are both professing Christians, both raised by pastor fathers. He has taken a more liberal-progressive direction in his life, while I have gone in a more traditionally conservative path. We disagree on a number of things (you'll see), and we likely vote differently as well. What I would point out in this is that even though we disagree, we can discuss it without calling each other names or getting vulgar, we can try to find some common points of agreement, and we can exhibit some measure of humility as well as respect for each other.

HERE IS OUR DISCUSSION:

MY FRIEND:
Most of the issues she (Liz Wheeler) brings up are being investigated and people have been suspended and fired and new protocols are being established. Nowhere near enough as congress has steadily cut funding for mental health and for schools for decades, but that's the perception and so they see no need or value in protesting. Everyone already agrees that these are issues that need to be taken care of. She does agree with the protesters that a person like the shooter should not have been able to get a gun. And that is what the protests are about. Some of them want to take all guns, some don't want to take any guns. All of them want to stop the shooting of their friends and classmates.

ME:
These kids protesting in the "March for our Lives" events are primarily going with the anti-gun, anti-Second Amendment thought that is one of the key agendas of the liberal/progessive (Democrat) movement. If these students were marching for LIFE, they would be against ABORTION, and march in the MARCH FOR LIFE as well. And if they had any "common sense" they would come up with some original thinking, reasoning, and profound solutions to this issue, which is only a relatively small issue concerning the deaths of teens in our country! Suicide, car "accidents" while texting, opiate drug abuse, alcohol abuse - these are far more deadly for our teens than the threat of being shot by a so-called "assault rifle" that they want to ban. THEY SHOULD CALL BS ON THAT!

Glad you listened! I am quite interested in the proportions. What these kids went through was horrific, to be sure. But how many of them text and drive, drink alcohol, do drugs, have unsafe sex with one another? Far worse problems, but the media is using this to push a gun-control agenda. Watch and be aware of that!

And truly if you want COMMON SENSE solutions to the mass shootings, come up with the right answers that might help! Armed guards and adults in the schools, get rid of the "GUN-FREE" ZONES - that is where over 95% of the shootings happen! Joe Biden and others came up with that brilliant idea back in the early 1990s. Might as well put up a sign that says "COME IN AND SHOOT US - WE DON'T HAVE ANY WAY OR ANYONE TO PROTECT US!"

Blessings, always, dear brother! I love you! "Slow down, you move too fast. You got to make the morning last..."

MY FRIEND:
And "Happiness runs in a circular motion" Love you too.

MY FRIEND:
So, you keep bringing up the abortion issue and I keep saying they're not related and then just ignoring your comments. Here's why, and perhaps why people or a person anyway has unfriended you. I've been tempted myself and did just stop listening and commenting for many months. When you, and the "Right to Life" people suggest, imply, or say, as you did to me that the reason we believe a woman has a right and responsibility to choose whether to give birth is that we just want to kill babies, that is a conversation stopper. It is incredibly offensive and wrong and has no place in civil discourse. When you post things like you did yesterday saying that we teach kids in school to kill babies, that is a lie meant to get us to hate each other. It's classic demonizing. And it means, as you have said that you can discount everything else a person might say if they disagree with you on the abortion issue. So... let me be clear. I love babies and do not want to kill them. I have 4 grandchildren that are absolute joys in my life. Every liberal pro-choice person I know feels the same way. No one I know likes or wants abortions. That is a false issue and it offensive to imply otherwise. We disagree on the best method to decrease the number of abortions. I believe that disagreement and the demonizing is fostered deliberately by people who want you to vote republican and to not listen to other points of view. You know...so they can cut taxes on themselves, destroy the environment for personal profit, charge outlandish fees for medications and other medical procedures and insurances and generally take the wealth of this country for the few at the top of the income scale... Also... FYI...screaming in all caps is not, in my opinion, civil discourse and is in many cases enough to unfriend someone.

ME:
I read and consider all that you share. You can do as you like as far as unfriending me. If you remain civil, I won't unfriend you. Abortion is and always will be a hot-button issue for me. I don't think I have said you "just want to kill babies" - those are your words. I am against the legal right for ANYONE to kill babies. Much killing in Germany and Russia and China was perhaps "legal" - but not right.

Abortion "is a false issue and it offensive to imply otherwise." Then let it be offensive - you have the right to be offended. "False issue" - I have no idea what you could possibly mean by that, after the slaughter of over 60 MILLION babies in the womb since 1973, and still counting! Just so people will vote republican - NOW THAT IS OFFENSIVE, REPUGNANT, AND A FILTHY LIE! (Note the all-caps! That is me yelling!) If you think I care about the murder of babies at all in the context of voting republican, then you do not know me at all. I do know that it is right there in the democrat platform "that every woman should have access to quality reproductive health care services, including safe and legal abortion..." That alone turns me against democrat politics. Talk about everything else all you want - environment, medicine, insurance, wealth, etc. The discussion we are having HERE starts with concern for life, the shootings, remember? Respect for life and lives.

By the way, ALL CAPS is the only way to put some em-PHAS-is here in the comments on Facebook. It's not always meant to be YELLING! (I have a sweatshirt that says - I YELL BECAUSE I CARE!) Again, if all caps offends you or drives you to 'unfriend' me, you can feel free to do so. Or...you can use all caps, too, if you wish! The dialogue will continue, if you wish. Or you can ignore my postings which offend you, as I do with some of your posts that I find offensive.

I wonder what the Lord Jesus would say...
Blessings, always.

MY FRIEND:
Well... I appreciate your willingness to listen. I apologize if I've been offensive. I apparently wasn't clear on one point. The false issue is the assumption by the "Right to Life" people and yourself that people who disagree with you just want to kill babies. And those are your words. I'm glad you are disavowing them. Believing that the woman who is pregnant should be making the decisions about her care and choices does not mean that I or anyone else thinks that abortion is the best choice or a good choice. But good women make this choice whether or not it is illegal. The issue we should be talking about is what is the best way to decrease the number of abortions. Quality sex education, contraception, good health care, a culture that values life and children, and eliminating poverty in this country will go a lot farther toward lowering the abortion rate than demonizing and shaming. Of course abortion is an issue... the lies around it confuse the issue. I believe Jesus said, among other things..."He who is without sin...(should cast the first stone - John 8.7)" Blessings to you also.

ME:
I appreciate your thoughts. To clarify, I try to be precise with my words. I have no assumption that you or anyone "just want to kill babies." But I do assume that you want it to remain legal as a CHOICE. Abortion is the killing of a baby. It used to be legal to kill your own children, even your own wife - I don't believe abortion is any more right and good than those behaviors! Strong words and thoughts.

MY FRIEND:
Yes, I believe it should be legal and safe. At the same time I spend a good part of my life trying to do my part to create a society that values life, love and children. I believe that is the best way to reduce the number of abortions. Thank you for your thoughtful response. I do think it's important to keep talking. So much of our society has become so polarized people who disagree seldom get this opportunity.


We ended this conversation as we always do, wishing each other well, with a blessing, and we are still 'FRIENDS' on Facebook. I for one plan on this continuing. Maybe one of us (him) will see that the other one (ME) is right.

Like the old saying goes - "Why should I agree with him? Then we would BOTH be wrong!" We remain as friends! That's what is important!